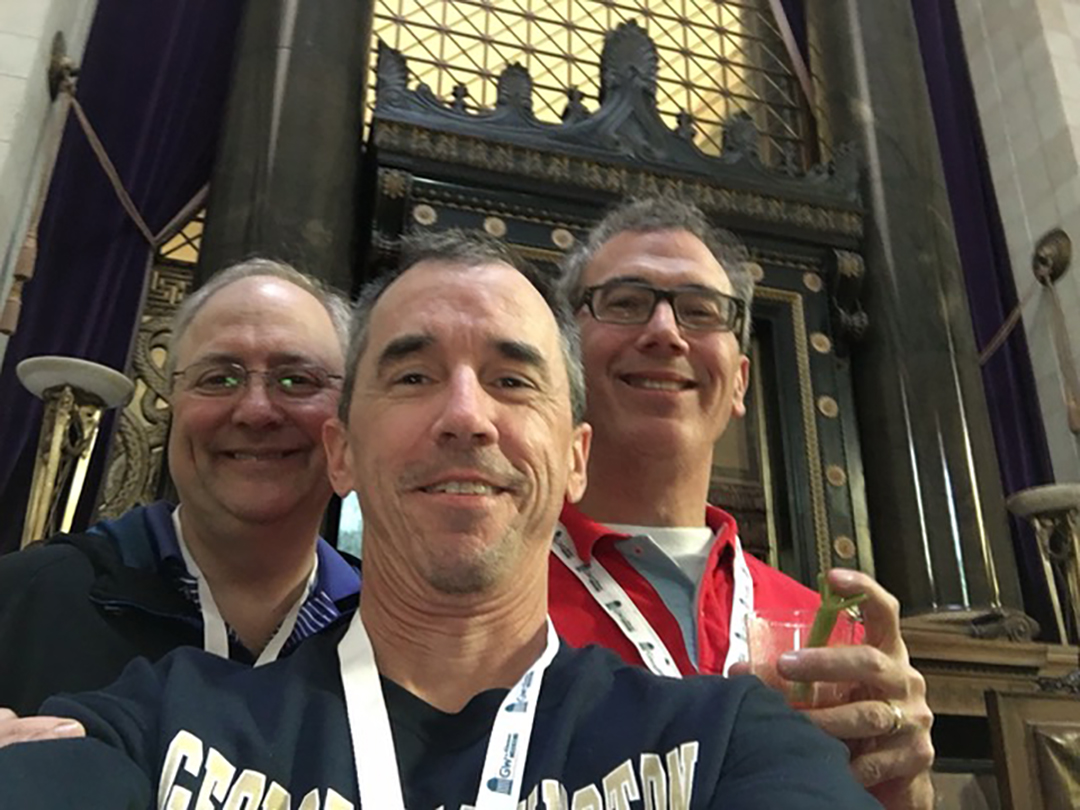 Left to right: Peter Morin, Kevin Crilly and Leon Rosenman at the 2016 reunion of the GW class of 1981. (Courtesy Kevin Crilly)

When Peter Morin arrived at the George Washington University as a first-year student in the late 1970s, enrolled in a “Politics and Values” residential program in Thurston Hall, he met all but one of his suitemates. The late arrival finally appeared, vanished into the last available room and didn’t emerge for “a day and a half,” remembered Morin, B.A. ‘81.

The suitemate’s name was Leon Rosenman, and the first impression Morin jokingly recounts was completely uncharacteristic of the person who would be Morin’s best friend for more than four decades. (It turned out Rosenman had pulled a multi-day shift at McDonald’s shortly before arriving at GW, Morin said.)

Other first impressions were more on the mark, like the friend who first remembers seeing Rosenman perched on a fellow student’s shoulders, wearing—for unknown reasons—a headlamp. As a student, Rosenman led Halloween expeditions trick-or-treating at the Watergate Hotel, ventured into Washington, D.C., for underground punk concerts and organized 2 a.m. tea parties. His friends describe him as an understated social star, witty, kind and energetic, around whom groups orbited without seeming to realize they were doing so.

“He was a force of nature,” Morin said. “It was like a magnetic thing. He pulled us all together and we were just in his orbit.”

Rosenman and his circle of GW friends remained close in the decades after they graduated in 1981, even holding regular Friday video calls during the COVID-19 pandemic. Rosenman maintained a database of his friends’ and loved ones’ birthdays, reaching out every year and—subtly, nonjudgmentally, by apparent accident—getting others to do the same. That emphasis on connection went beyond birthdays, especially for mutual friends going through hard times.

“He was a caretaker, and he had this high level of awareness when other people were suffering—and he was really good at making strategic emotional links, like, ‘OK, you’re the best person to help So-and-So with this,’” said Rose Hayden, B.A. ’81. Like Morin and Rosenman, Hayden spent her first year of college in Thurston and still maintains the friendships she made there. “He was such an important part of the tapestry of our lives.”

So when Rosenman died unexpectedly last October, Morin, Hayden and several other GW friends found themselves searching for ways to channel their grief and honor someone irreplaceable. They found an opportunity that brought them full circle: the renovation of Thurston Hall, scheduled to be ready for move-in by August 2022. Why not name a space for Rosenman in the building where so many of them met him and each other for the first time—somewhere similarly lasting friendships could potentially begin and grow?

Kevin Crilly, B.A. ’81, who has a background in fundraising, took on the work of organizing the outreach process among Rosenman’s GW friends. Crilly’s first memory of Rosenman also took place at Thurston: As a first-year student, Crilly worked dull shifts at the residence hall’s front desk, opening mail, answering phones and fielding student questions. On Friday afternoons, he remembers, a raucous group of students from the Politics and Values program would “come barreling out the doors of the first floor” on the way to happy hour (legal at the time for 18-year-olds). One of those students noticed Crilly and began chatting with him at the desk, gradually roping Crilly into the social whirl. The student was, of course, Leon Rosenman.

“That’s the kind of guy he was,” Crilly said.

Hayden said the naming opportunities created by the Thurston renovation felt like “the perfect storm” to pay tribute both to Rosenman and to the place where their group originally connected.

“We had this great thing, and we had it because we all lived in this crazy dorm,” she said.

Given Rosenman’s influence on so many lives, his friends seem almost unsurprised by the meteoric way the fundraising campaign took off.  A relatively small group of about 40 alumni have now raised more than $175,000, enough not only to name Thurston’s 7th-floor courtyard terrace in honor of Rosenman but also to start thinking of other ways to make his legacy last at GW.

They’re now expanding awareness of the fund beyond the initial small group of friends, with goals including a Thurston programming fund to support students transitioning to college and one or more scholarship programs. One way or another, the group hopes to materially impact the lives of GW students, just as Rosenman impacted theirs.

“There’s a lot more than 30 people that Leon Rosenman touched, people that feel the void that I do,” Morin said. “Leon—not only his loss, but his friendship—made us so aware of the importance of human connection. We just want to keep it going. We’re not done. This is just the first thing; let’s go to the next.”

The GW community is invited to join in the effort to give back in Leon Rosenman's memory. 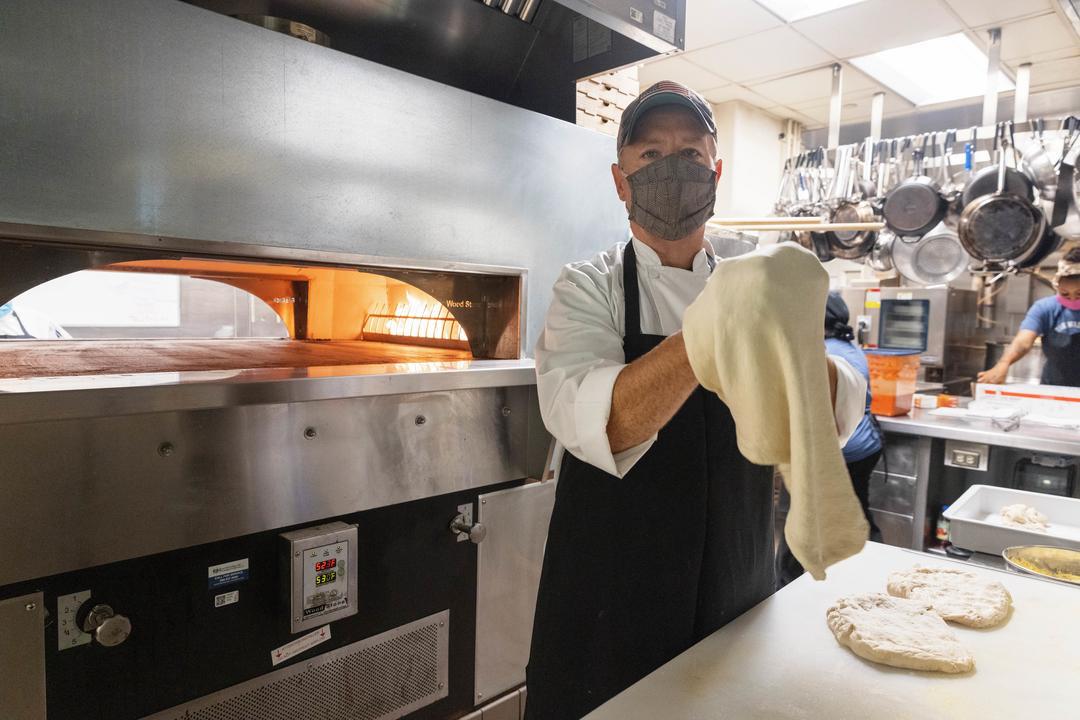 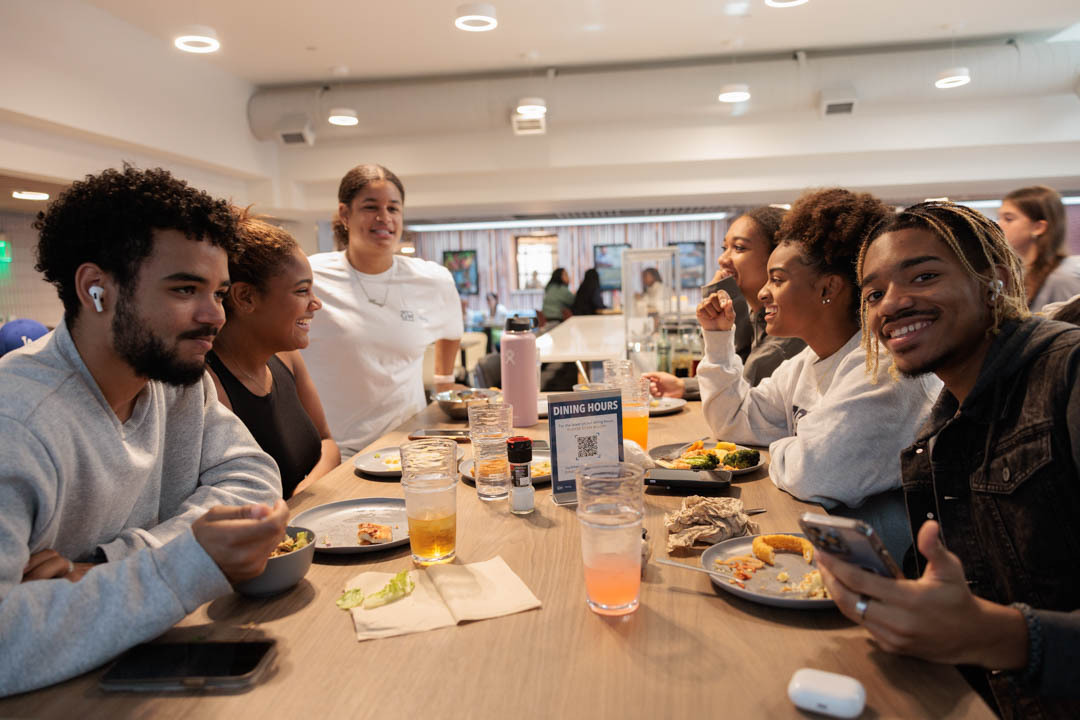