A year into its operation, the Store has more shoppers, more partners and more items to offer.
November 20, 2017 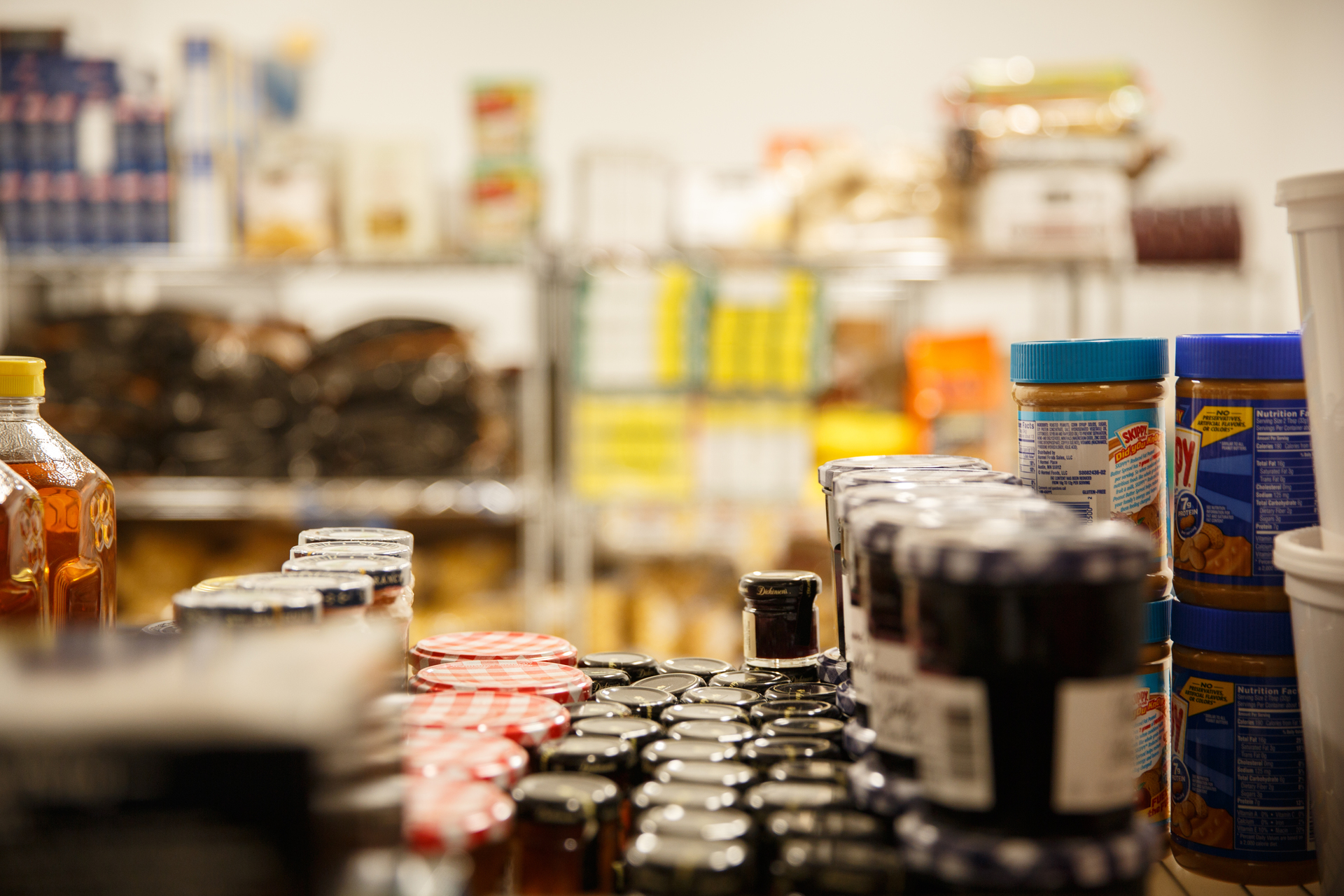 The Store is located in the basement of District House. (William Atkins/GW Today)

The note Sarah Sem found told a harrowing story. The writer, homeless in high school, had found herself homeless again as a college student, even sleeping on the floor of a professor’s office. And while she tried to get her situation back together, she’d had an invaluable resource in the George Washington University’s student-run food pantry, the Store.

Not having to worry about how she would eat had helped her turn her life around, the student wrote.

“When I read that it struck a real chord in me,” said Ms. Sem, a sophomore in the School of Media and Public Affairs. “I realized what an impact [the Store] was having.”

At the time, Ms. Sem was working as an interim volunteer coordinator for the Store Org, the student organization that runs the Store. Now, as the pantry passes its first year in operation, she is the organization’s president.

“I originally got involved out of curiosity,” she said. “But I realized it needed to be a bigger part of my life.”

In November 2016, two months after it opened, the Store had 311 anonymous “shoppers” to whom it could provide nonperishables, staples and some fresh food.

A year later, there are 513 registered shoppers—a 65 percent increase—and what started as an experimental pantry has evolved into something much more comprehensive.

The Store has always partnered with the Capital Area Food Bank, from whom volunteers pick up about 2,000 pounds of food every other week at a cost of 19 cents a pound. On pickup days, Ms. Sem describes a pleasantly chaotic atmosphere in the basement of District House, like a family grocery day gone wild. Cardboard boxes lie everywhere as teams of volunteers unpack two vans’ worth of food.

But after a year in operation, Ms. Sem says some repeat volunteers, like the school’s rowing team, have the process “down to a science.”

“We’re kind of an assembly line,” she said. “It starts out chaotic, but by the end we have everything labeled, turned in the right directions, we’ve broken down the boxes and swept the store.”

Then volunteers leave the newly stocked Store unattended, giving shoppers their privacy—one of organizers’ priorities since the partnership’s inception.

An email goes out to the listserv of shoppers, and the shelves clear quickly. Left behind, often, are anonymous notes like the one Ms. Sem found.

“We frame some of them,” Ms. Sem said. Others are sent to donors or community partners, helping them see what a difference their gifts have made.

Even though shoppers and volunteers almost never meet face to face, Ms. Sem said they feel a strong connection to each other.

Most recently, the Store formed a partnership with the Whole Foods Market Foggy Bottom store, located on campus, which will help to supplement perishables such as eggs, produce, milk and other sustainable fresh food items.

“Our Whole Foods Market Foggy Bottom location is happy to support The Store’s critical mission of providing resources for students living with food insecurity,” said Michelle Tafazoli, a regional marketing manager for Whole Foods Market. “We hope to alleviate the limited resources that the Store is receiving by helping to supply fresh, and nutritious items for the students—making sure that each student has everything they need to succeed.”

Coleen Kelty, department operations supervisor in the Center for Student Engagement, which houses the Store, described the partnership with Whole Foods Market as  “incredible.” “For shoppers to be able to get nutritious, fresh items is huge,” she said.

With the holiday season approaching, Whole Foods Market and the Store also teamed up for Friendsgiving, a program through which GW students could order generous Thanksgiving meals at a cost of just $12 per person for a classic Thanksgiving or vegetarian meal.

“We strive to support our local and global communities, and the partnership with the Store allows Whole Foods Market to be intimately tied to GW students,” Ms. Tafazoli said. “We realize that many dietary habits are formed in college, and embrace the responsibility to be stewards of real food—food without artificial flavors, sweeteners, colors or preservatives. We believe we can guide healthy decision-making through this collaboration.”

The Store also takes end-of-day donations from on-campus franchises like Peet’s Coffee, which are otherwise legally required to donate or trash such items.

“It’s just making sure things don’t go to waste when they don’t have to,” Ms. Sem said.

The Store doesn’t limit itself to food, either.

For instance, students who need jobs may not have the business wear necessary for a successful interview, Ms. Kelty said. That’s why the Store spearheaded the “School Success Drive” this summer, which solicited gently worn professional clothes, especially blazers, in all sizes.

The Store’s student organization also partnered with the GW Program Board to run Pads for the People, a menstrual supply drive. In fact, the Store takes donations of many personal hygiene items. Ms. Sem said employees from the Division of Development and Alumni Relations returned from a recent conference laden with complimentary hotel shampoos and soaps.

“We’re trying to cover all the bases we can reasonably cover,” Ms. Kelty said.

The goal now is simple but not easy. The Store’s organizers want to maintain the services it provides—and they want to make sure they’ll be able to do so far into the future.

“The goal right now is to secure an endowment,” Ms. Kelty said. “That would mean we could ensure the Store would be a resource for students forever.”

To make a gift to support The Store, please visit go.gwu.edu/give2thestore. 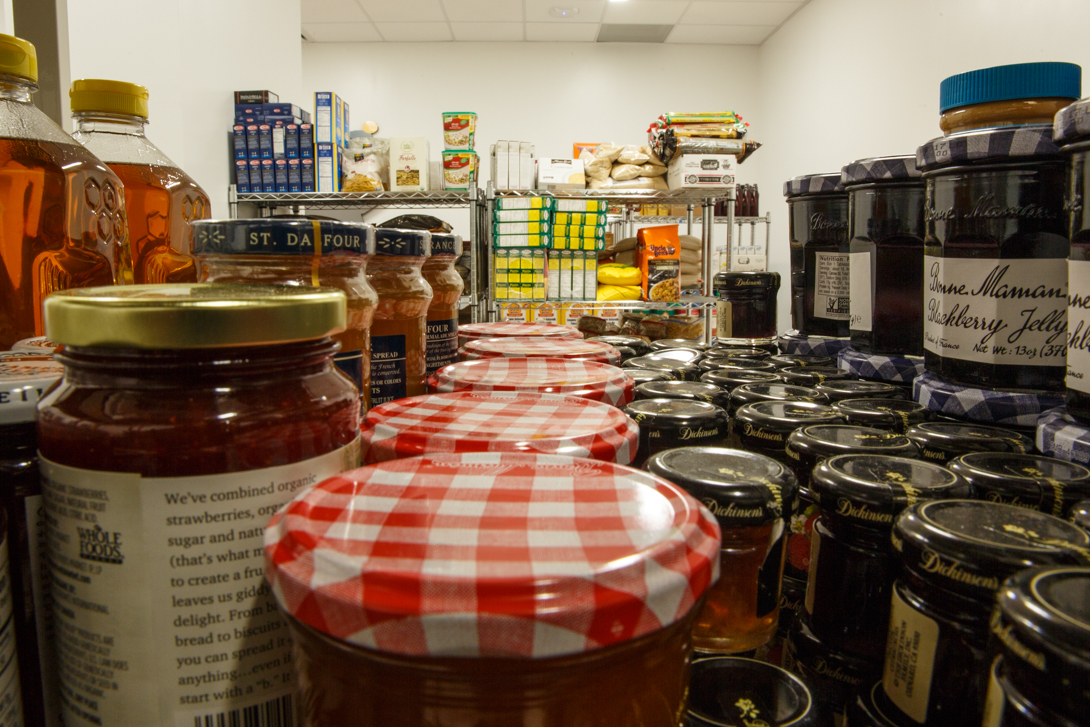