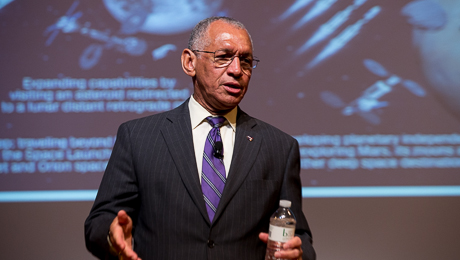 It’s inevitable: The sun will someday burn out—though it’s not bound to happen within the next 5 billion years.

Even so, if the human race is going to “survive indefinitely,” we are going to have to start looking at life beyond Earth, NASA Administrator Charles Bolden said Tuesday to an audience in the George Washington University’s Lisner Auditiorium.

“Almost daily, we get a picture of a star that is no longer. One of these days, that’s going to be the story of our star—the sun,” Dr. Bolden said. “We need to become a multi-planet species.”

And that will begin with sending humans to Mars.

Dr. Bolden outlined NASA’s approach to sending humans to the red planet by year 2030 during the three-day 2014 Humans to Mars (H2M) summit co-hosted by Explore Mars Inc. and GW’s Space Policy Institute. The conference brought together some of the finest minds in space exploration to discuss the feasibility of reaching Mars within the next two decades.

“The challenge is huge, I don’t want to fool you,” Dr. Bolden said. “If you don’t think so, then please listen up as we talk over these next few days.”

Still, the NASA administrator spoke confidently about his agency’s bipartisan space exploration plan, agreed to by the Obama administration and Congress, and embraced by the international space community. Dr. Bolden admitted that federal funding for Mars exploration is still scarce, which means that aid from nongovernmental sources will be necessary.

NASA's annual budget of $17.65 billion is around 0.5 percent of the federal spending plan, compared with the 4 percent of the budget that was devoted to the Apollo program in the 1960s.

“We are not going to get 4 percent of the federal budget,” he said. “We’re going to have to figure out ingenious ways to do it based on the present budget plus modest increases.”

But even with an endless amount of monetary resources, NASA would not be prepared to send humans to Mars tomorrow. First, the space agency must increase its knowledge about the red planet and develop the technologies that will ensure astronauts’ safety as they travel there and then return to Earth.

That is why NASA has developed “stepping stones” that will lay down the necessary groundwork for the more dangerous Mars mission.

NASA’s path to Mars will begin with sending astronauts beyond low-Earth orbit with the Space Launch System rocket and the Orion spacecraft, while research will continue on the International Space Station. By 2025, NASA will seek to capture a near-Earth asteroid and bring it to a stable orbit in the Earth-moon system, allowing astronauts to perform test missions on the asteroid.

“It’s important to remember that NASA sent humans to the moon by setting a goal that seemed beyond our reach.”

Dr. Bolden said that a Mars mission will not only tell us more about our own planet’s history, but it will also set the stage for lengthier explorations beyond the Earth’s solar system and the Milky Way galaxy.

“It’s important to remember that NASA sent humans to the moon by setting a goal that seemed beyond our reach,” he said.

And who better to attest to that statement than one of the first men to set foot on the moon—Buzz Aldrin himself.

Though some may think of where he has been, the astronaut continues to look forward to humans’ future in space, starting with Mars.

In his keynote speech at the H2M summit, Dr. Aldrin said the U.S. should be aiming to do more than simply send humans to Mars; the ultimate goal should be “permanence.”

“The pilgrims on the Mayflower didn’t hang around Plymouth Rock looking for the return trip. Permanence is not a settlement or a colony—you can usually go there, look it over and come back,” he said. “Why in the world would we want to bring people back, when our purpose is to establish permanence?” 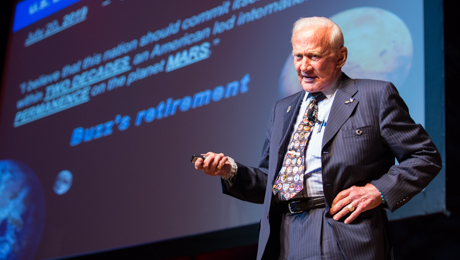 Buzz Aldrin, the second man to walk on the moon, believes the ultimate goal should be to establish human permanence on Mars by 2035. He said "maybe" he'll retire once he is able to convince people that a permanent base on Mars is a good idea. "I've got to hang around and smarten them up," he said on Tuesday.

Dr. Aldrin outlined his own “Unified Space Vision,” the blueprint that will maintain U.S. leadership in human spaceflight, avoid a counterproductive space race with China to be second back to the moon and lead to a permanent American-led human presence on Mars by 2035.

While Dr. Aldrin agreed with Dr. Bolden that humans should explore an asteroid before heading to the moon, he said he does not think “capturing” an asteroid and bringing it back close to the moon is the most effective strategy. He said he would rather see astronauts land on an asteroid that is still deep in space. With Dr. Aldrin’s model, NASA would send the space agency's Space Launch System rocket and Orion space capsule, to ensure that a space mission that far away would be do-able, before sending people to live a year on Mars.

Dr. Aldrin said he doubts he’ll retire. First, he needs to convince people that keeping a base on Mars is a good idea.

“There are a lot of people that think this is an 'egghead' idea, so I've got to hang around and smarten them up," he said. 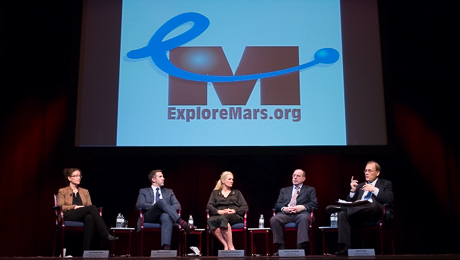 Closing out the first day of the summit, representatives from GW who are addressing the challenges of space exploration gave summaries of their work. The panel included: