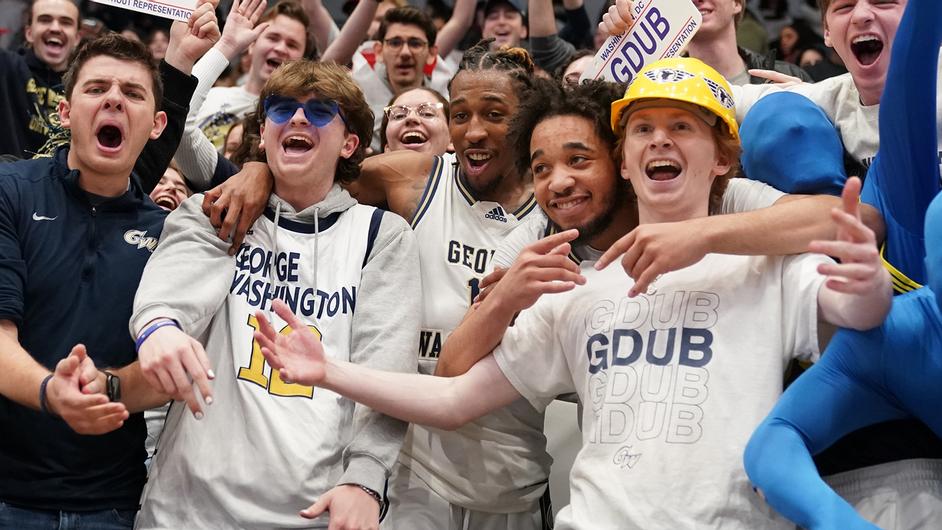 Fans in the Smith Center celebrate as GW men's team improves to 4-2 in the Atlantic 10.

It was a showdown of two of the top candidates for Atlantic 10 Player of the Year on Saturday in a matinee tip in D.C., as the league's top-scoring player in George Washington University's James Bishop IV hosted Dayton's DaRon Holmes II in a nationally-televised game, and backed by a bevy of buckets from his backcourt buddies, Brendan Adams and Maximus Edwards, Bishop was king of the conference in GW's thorough 76-69 win.

The Buff and Blue led wire-to-wire against the preseason favorite Flyers and current top team in most national rankings among A-10 teams, getting it done on the defensive end by holding Dayton to 35.8% shooting from the floor.

It was all GW from the start, and the early going saw a Bishop basket and free throw make it 22-12 GW with 7:25 remaining in the first half, followed by a Max Edwards basket that made the score 24-12, through more than 14 minutes of play. The stout defense of the home team limited visiting Dayton to 22 points on 26.7% shooting in the first half. When Edwards hit a buzzer-beating three-point shot to close the half, GW completed arguably its best half of the season, leading wire-to-wire and taking a game-high 14-point lead into the locker room. Edwards' three pointer was his third of the half in four attempts, as he scored 13 points in the first 20 minutes of play.

Holmes entered play third in the A-10 in scoring but was held to 14 points on 15 shots, as he was swarmed by the double team of Ricky Lindo Jr. and Hunter Dean, who let their backcourt do the scoring while focusing their energy and efforts on Holmes

Former GW recruit Toumani Camara, who played at Georgia before transferring to Dayton, entered play leading the A-10 with 9.1 rebounds per game. He took advantage of some clean looks afforded him by the attention to Holmes and led Dayton with 16 points on 6-of-12 shooting.

Bishop, who also ranked second in the conference in assists per game alongside his leading scorer honors, was two-thirds of the way to matching his career-high in assists in the first half alone, with an array of heads-up dimes to his teammates including a nifty late look to Lindo standing under the hoop for a rim-rattling slam to put GW up 33-22 with 90 seconds to go in the half. Lindo's basket was part of a GW effort that outscored their foe 16-6 in the paint before halftime as all but four of the Buff and Blue's 36 first-half points came in the paint, behind the 3-point line or at the free throw line.

In the second half, GW thwarted a Flyers' push, and it was Bishop who carried the scoring load. His game-high 27 points stamped his claim for the A-10's best, while Adams continued to be Mr. Reliable at the free throw line. Adams hit 11-of-12 free throws en route to his 18 points, while reigning A-10 Rookie of the Week Edwards finished with 15.

GW stays home this week to host Saint Joseph's at 7 p.m. Wednesday at the Smith Center. The game will be carried live on ESPN+.