A former philosophy professor and vice president for academic affairs, French was lauded as a “force for good” at the university.
August 11, 2022 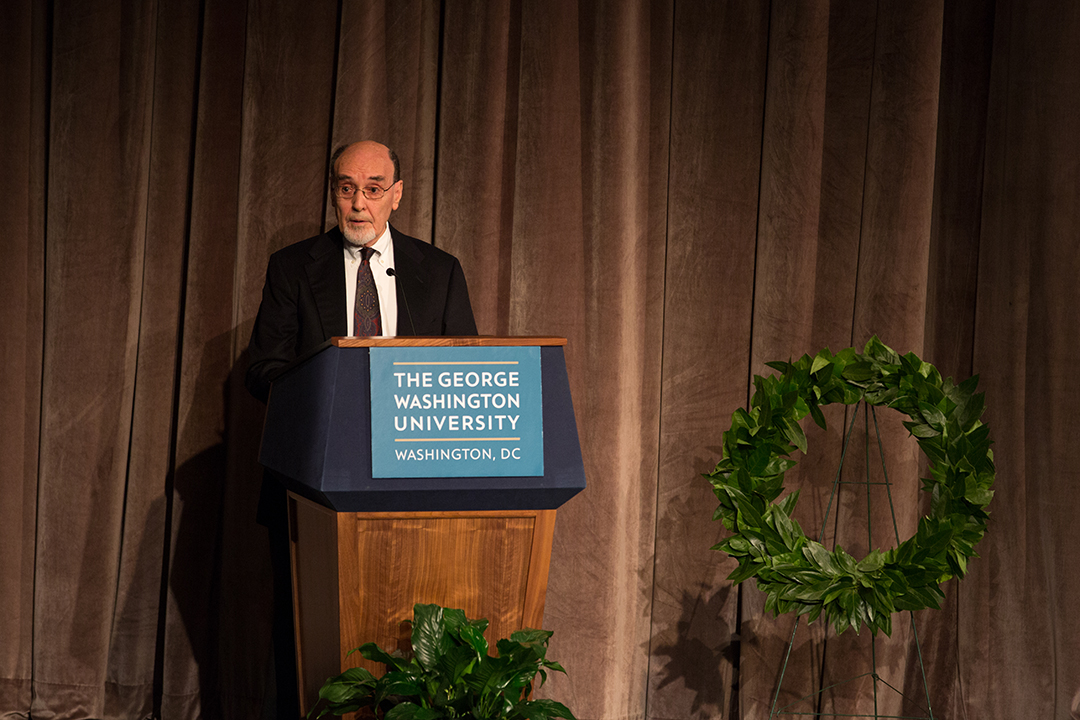 The George Washington University community remembers the life of Roderick “Rod” French, a former faculty member in the Department of Philosophy and vice president for academic affairs. During the 28 years he served the GW community, French was known as a champion for the humanities and a force for good. He died in June at 93.

“Rod French lived and worked as a true GW scholar, driven by the purpose of making the world a better place through scholarship and service,” said Provost Christopher Alan Bracey. “He had a profound impact on GW and beyond, and we are extremely grateful for the nearly 30 years he devoted to this university."

A virtual memorial service on Zoom is planned for Sunday, Aug. 14, at 2 p.m. EDT.

French came to GW as a Ph.D. student in 1968 and received a doctorate in American civilization. He was passionate about experimental and experiential education and was appointed associate director of the university's division of experimental programs in 1969, a division responsible for university-wide curricular innovation and academic program development. He was named director of the division in 1979.

French’s leadership supported the development of new cross-disciplinary programs and courses that have become the signature of a GW education, said Ralph Steinhardt, the Lobingier Professor of Comparative Law and Jurisprudence at GW Law. French was named vice president for academic affairs in 1984, a position he held until 1995.

“He was the very exemplar of humane education,” Steinhardt said. “He understood the virtues of academic life, always though, with a good sense of humor about academic foibles. He understood in a deep way the values of education and the value of an educational community. He appreciated and respected every member of the GW community and understood the contribution that they made.”

When Steinhardt began interacting with French regularly during his tenure as parliamentarian of the Faculty Senate in the 1980s, French was seen as a “known force for good” within the university community. French “wore his education lightly” but operated with a kind of wisdom and balance that could effectively solve conflict, Steinhardt said.

French recruited Donald Lehman, then-chair of the physics department, to serve as associate vice president for research and graduate studies. During the three years they worked together directly, French was a confident academic who modeled what it meant to lead with open communication and transparency. Lehman, now professor emeritus of physics, eventually succeeded French as vice president for academic affairs.

“I had a good example to think about, you know, what would Rod have done under these circumstances?” he said.

French was a true philosopher and a pure humanist, Lehman said. In addition to his work at GW, French was involved with the D.C. Council of Humanities and the National Endowment for the Humanities.

“We used to have great conversations about all kinds of topics in academic affairs,” Lehman said. “We would discuss books that were relevant to the academic arena, and many times he taught me things from a philosophical viewpoint that to this day I still remember.”

After stepping away from his administrative role, French worked with the University Honors Program and served as faculty adviser for a GW undergraduate research journal. French left GW in 1997 to become the first chancellor of the American University of Sharjah in the United Arab Emirates, a position he held until 2002. He served as chancellor emeritus of the American University of Sharjah and a member of its board of trustees.

In 2011 and again in 2014 French donated a collection of his personal papers to GW. The collection includes notes, press releases, speeches, brochures, correspondence, clippings, reports and publications pertaining to French's work for GW and his involvement in the D.C. Council of Humanities, the National Endowment for the Humanities, the American University of Sharjah and other organizations. Materials in this collection date from 1969 to 2013, with the bulk of the material dating between 1969 and 1998.

French earned an undergraduate degree in philosophy from Kenyon College. He went on to earn a master’s of divinity in church history, theology and biblical studies from the Episcopal Theological School in Cambridge, Massachusetts, and a master’s of sacred theology in modern church history from Union Theological Seminary in New York City prior to earning his Ph.D. from GW.

During his early career, French worked as executive director of the youth department of the World Council of Churches in Geneva and later served as special assistant to the director of the office of public affairs of the Peace Corps.

French is survived by his wife, Sally, and his children, Eric and Sarah.