The GW community remembers the life of Colin Powell, a politician, diplomat and four-star general who is a distinguished Monumental Alumni member at the university.
October 18, 2021 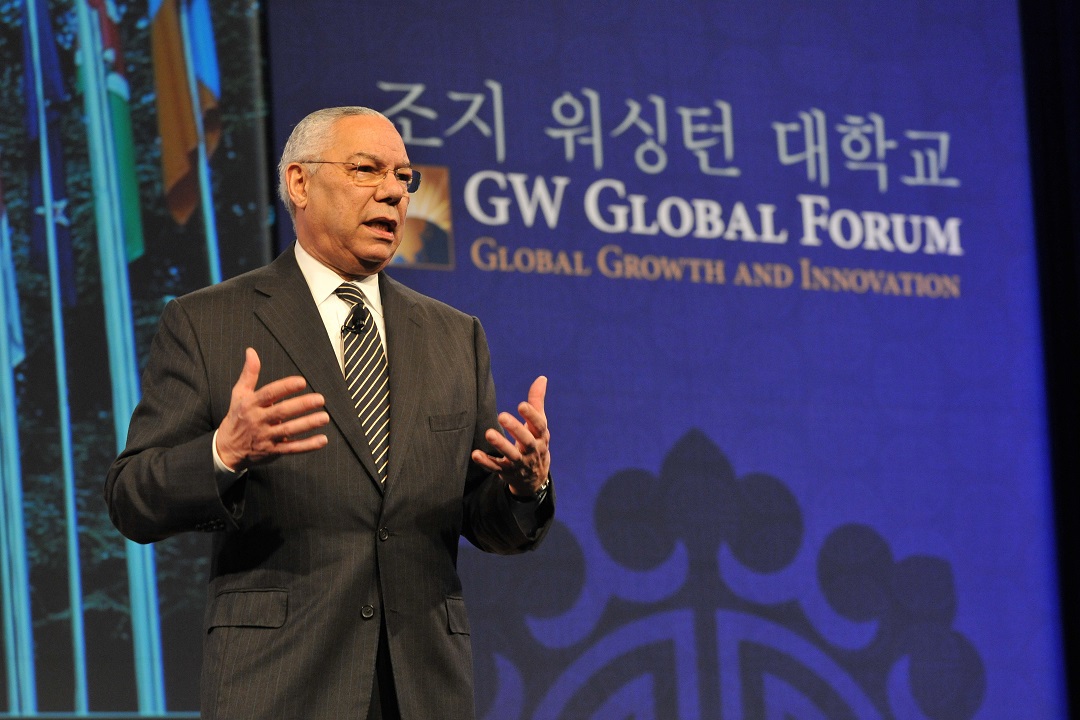 The George Washington University community remembers the life of Colin Powell, a trailblazing public servant who in 2001 became the first African American to serve as the United States secretary of state. The retired four-star general in the U.S. Army played a key role shaping the nation’s foreign policy in the 20th and 21st centuries.

General Powell died on Monday of complications related to COVID-19. He was 84.

General Powell, who served in the U.S. Army for 35 years, earned an M.B.A. from GW in 1971 in addition to receiving an Honorary Doctor of Public Service from the university in 1990. He was honored during GW’s Centuries Celebration as one of the university’s distinguished Monumental Alumni, a group consisting of 73 alumni who went on to make their mark on the world by living the university’s mission of engaging as global citizens.

Flags at GW are flying at half-mast in General Powell’s honor.

"General Powell is remembered for his deep commitment to public service, particularly as a veteran and as a leader in national security, diplomacy and foreign policy," President Thomas LeBlanc said. "Our university community has been fortunate on several occasions to learn from General Powell's vast world knowledge and experiences, and he will continue to serve as an inspiration to many of our students, faculty, staff and his fellow alumni. We share our condolences with General Powell's family."

General Powell stayed connected to GW throughout the years. He formally opened the Elliott School of International Affairs building on Sept. 5, 2003, while serving as secretary of state. He represented the university as the keynote speaker in March 2012 at the GW Global Forum in Seoul, South Korea. General Powell presented Monumental Alumna Tammy Duckworth, M.A. ’92, with the Colin Powell Public Service Award at GW’s Celebration of Service dinner in October 2009. He also returned to campus for a book signing at University Student Center in 2012 and spoke at Lisner Auditorium in 2014.

Born in New York City on April 5, 1937, to Jamaican immigrant parents, General Powell received a commission as an Army second lieutenant in 1958 and rose through the ranks, going from combat duty in Vietnam to being one of the United States’ leading national security voices.

General Powell served Presidents Jimmy Carter and Ronald Reagan in national defense roles. He was President Reagan’s national security adviser from 1987 to 1989. In Oct. 1, 1989, President George H.W. Bush appointed General Powell as the chair of the Joints of Staff, making him the first and only African American to serve in that role. During his time as chair, he oversaw 28 crises, including the Panama intervention of 1989 and the 1991 Operation Desert Storm during the Persian Gulf War. General Powell, who also served under President Bill Clinton’s administration, held his post as chair until 1993.

He became the nation’s 65th secretary of state when President George W. Bush appointed him to the position in January 2001, a role he’d have until 2005.

He was active in the private sector after his work with the U.S. government, serving on numerous boards and councils. General Powell has nine elementary and middle schools named after him. He is survived by his wife Alma Vivian (Johnson) Powell, whom he married in 1962, three children and two grandchildren.

General Powell obtained a bachelor’s degree in geology from the City College of New York, where he was active in the Army ROTC program.