Looking Back: The Columbian Women 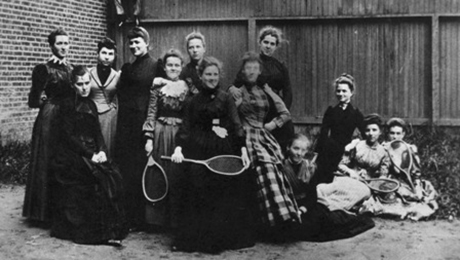 One of the original 13 women admitted to the Columbian College, Edna Clark recalled the climate of repression that pervaded women’s higher education in the late 19th century.
“We knew that we were looked upon as a problem, that we were on trial, at any rate we were pioneers and felt sure that if we did not ‘hang together’ we might ‘hang separately,' ” she said in an article with GW Hatchet in 1931.
Just five years earlier, the George Washington University—then known as Columbian University—had enrolled its first female students in the previously all-male school, more than 70 years after its founding in 1821. Ms. Clark and her cohorts termed their class the “Original Thirteen.” They were the first women accepted in the humanities-focused Columbian College in 1889, and some of their members formed the Columbian Women group in order to raise scholarship funds for Mary Chapin, a student whose father had died in the Ford’s Theatre disaster of 1893.
Since this charitable genesis, the Columbian Women have provided thousands of dollars in scholarships to female students and hosted hundreds of events including receptions, teas, musicals and lectures that have significantly contributed to the university’s cultural and social heritage. Their fundraising efforts have supported purchasing books for the library, furnishing rooms at the hospital, and, more recently, contributing to the Estelle and Melvin Gelman Library and the Cloyd Heck Marvin Center, both of which have rooms named in honor of the group.
In addition to fundraising, artistic and social events, the Columbian Women have participated in major women’s equality activities. The group provided leadership in founding the “College Women’s Club of Washington” in 1907, which later merged with the Washington Branch of the American Association of University Women. In 1921, then-president of Columbian Women, Elizabeth Peet, represented the group during suffrage memorial ceremonies at the Capitol, at which a statue of three pioneers of the women’s movement—Susan B. Anthony, Elizabeth Cady Stanton and Lucretia Mott—was unveiled.
That same year, in cooperation with women’s organizations throughout the United States, the Columbian Women made a contribution toward the purchase of one gram of radium for Marie Curie. On Aug. 26, 1977, members marched alongside 3,000 women to demonstrate support for the Equal Rights Amendment.
Individual members of the Columbian Women have also significantly contributed to women’s rights in the nation’s capital. Suffragette Kelton Wiley picketed the White House (for which she was arrested and jailed in 1917) and later became chairman of the National Women’s Party; Marion Wade Doyle was the first woman president of the D.C. Board of Education; Esther C. Lawton was an active member of both the Federally Employed Women and the Business and Professional Women’s Federation; and Ruth Osborn developed the Continuing Education for Women program at GW.
“To achieve equality, development and peace…requires that women and men from all parts of this world work together with vision and dedication to build on diversity of cultures as well as on our individual differences,” said Dr. Osborn.
For the past 130 years, the influence and achievements of the Columbian Women have provided a voluble voice for women at GW through service, women’s rights and cultural enrichment. The mission statement of the organization today reflects the group’s aim of advancing women at the university. Ramona Stoltz, B.A. '96, a member and former president, said that in recent years, the Columbian Women have given out more than $90,000 in annual scholarship assistance.
“The Columbian Women are still offering assistance to women at all schools within GW, and we are committed to continuing the legacy of this organization at the university,” Ms. Stoltz said.
The GW Special Collections Research Center holds the Columbian Women records. To learn more about the group, attend the Diversity Research Fellowship Event on April 23, from 4 p.m. to 5:30 p.m. at the Gelman Library or visit the Columbian Women’s website at http://www.columbianwomen.org.