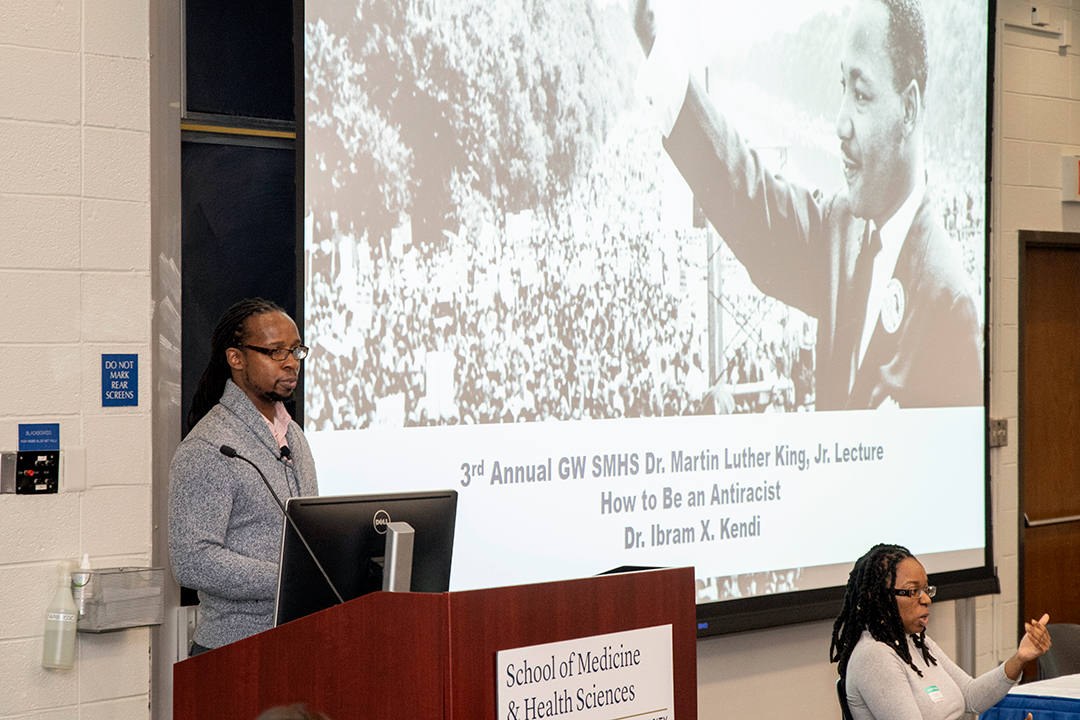 The first step to being an antiracist is confession and recognition of racist ideas you may have, American University History Professor Ibram X. Kendi said Wednesday at the Third Annual School of Medicine and Health Sciences Martin Luther King Jr. Lecture.

Dr. Kendi said that the next step to being an antiracist is clearly defining and understanding the contrast between racism and antiracism in policies and people.

This can be learned by looking at the totality of Dr. King’s life. In doing this, Dr. Kendi said, it is also necessary to reject the “widely ahistorical” analogy of how far we have come, and how far we have to go, to reach Dr. King’s dream.

Rather, he said, there has been a dual progression of racial progress and racism—antiracism breaking down barriers, and racism rebuilding new and more sophisticated barriers to exclude and exploit people.

The lecture was part of George Washington University’s annual King Week events, celebrating the life and legacy of Dr. Martin Luther King Jr. Jinny Jang, assistant director of the SMHS Office of Diversity and Inclusion, said hosting this lecture inspires and challenges the university community to pursue equity for all. At SMHS, which educates the next generation of health care professionals, Ms. Jang said, this is vital.

“Throughout the United States, racism contributes to health disparities,” Ms. Jang said. “Antiracist action and policy have the potential to not only improve our entire health care system, but also propel us on our journey to health equity.”

Dr. King’s nightmare of the progression of racism in America, Dr. Kendi explained, can be combatted with an honest look at America’s history and a reclamation of who Dr. King was beyond his “I Have a Dream” speech. This includes embracing Dr. King as a revolutionary who criticized America’s values.

Dr. Kendi added that to realize Dr. King’s dream, we need to call for immediate equality and spend the rest of our lives like Dr. King: “in the long and bitter—but beautiful—struggle for a new world.”

"To sustain the fight against anything, King understood that we have to philosophically believe change is possible,” Dr. Kendi said. “We are losing this country to lies and wars and inequalities and exploitation, but the nation is not lost.