The politicians reflected on their roles during a celebration for Mr. Mondale held at GW.
October 21, 2015 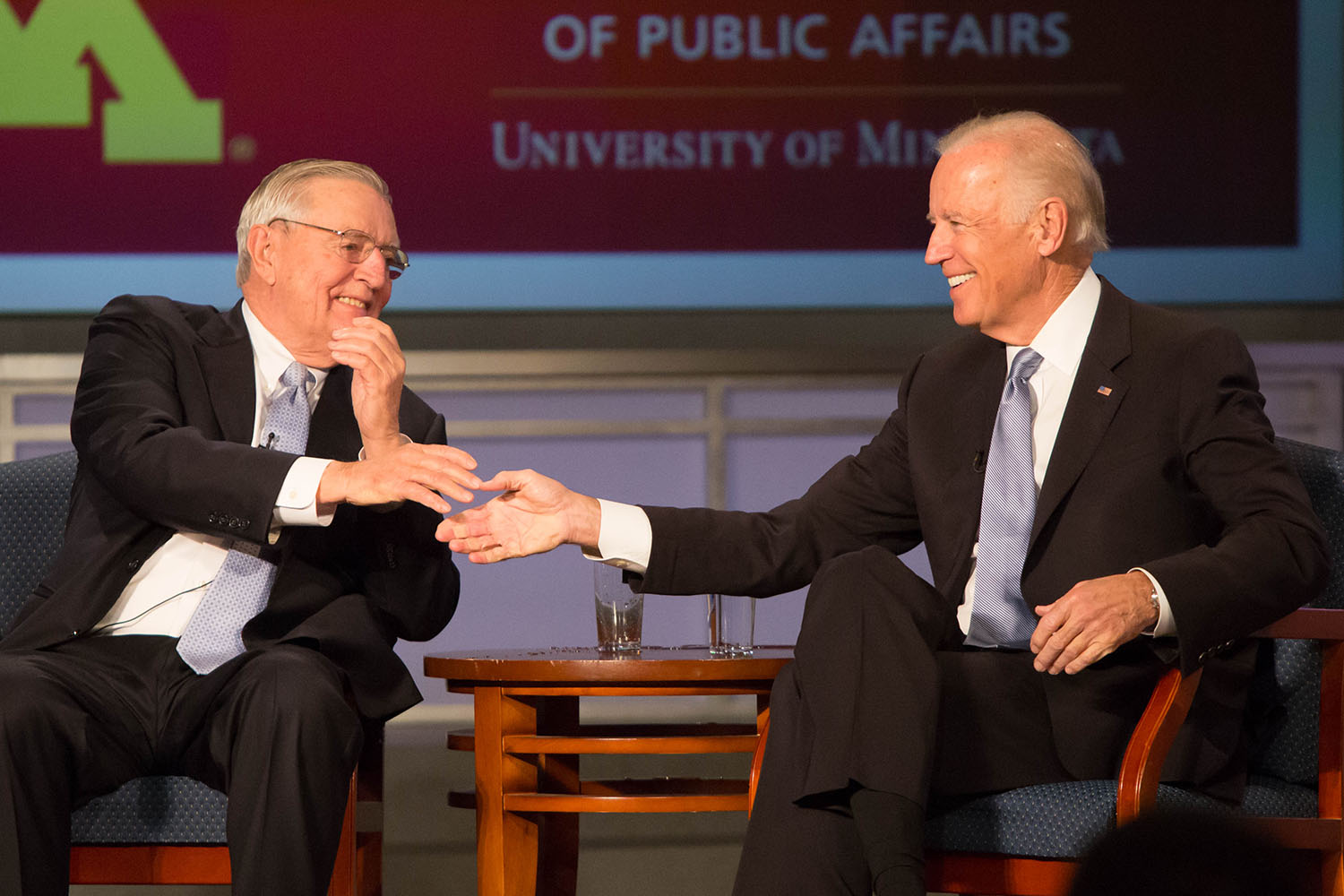 Speaking one day before announcing he would not run for president in 2016, Mr. Biden provided remarks at a celebration honoring the life and career of Mr. Mondale. The University of Minnesota’s Humphrey School of Public Affairs and the George Washington University’s Trachtenberg School of Public Policy and Public Administration organized a daylong symposium examining Mr. Mondale’s contributions as a political figure.

Mr. Mondale changed assumptions about the vice presidency, which had been previously called “the fifth wheel to the government coach.” He became an active second-in-command and the first vice president to work directly out of the West Wing.

“I did not want to be involved in the details of government, I didn’t want to do anything that somebody else was doing. I wanted to be a general adviser to the president,” Mr. Mondale said.

Mr. Biden said that when he was offered the vice presidency almost 30 years later, the first person he called was Mr. Mondale. He wanted to continue building on the leadership the former vice president had established. Mr. Mondale provided him with a memorandum of essential elements that made the Carter/Mondale partnership successful.

Mr. Mondale went into detail about some of those qualities on Tuesday. He was keenly aware that anything he said could be attributed to the president. He also made sure that he and President Carter came across as partners, and that any disagreements they had happened in private.

Drawing on their example, Mr. Biden said that he is careful that his opinions do not undermine the president’s. He revealed one example during the 2011 raid that killed Osama Bin Laden: At a cabinet meeting, Mr. Biden waited until he was alone with President Obama before advising him to continue with the operation.

“I told him my opinion, that I thought he should go, but follow his own instincts,” Mr. Biden said. “Imagine if I had said in front of everyone, 'Don't go,' or 'Go,' and his decision was a different decision. It undercuts that relationship.”

The anecdote differs from an ABC News Report in which Mr. Biden said he told President Obama not to move forward with the raid, several media outlets noted.

Mr. Biden also said that after his early conversations with Mr. Mondale, he made sure he knew the expectations of his job. He added that he and Mr. Obama have had no ideological disagreements, and that they are “simpatico on all the major issues.”

“A vice president is totally a reflection of the president. There is no inherent power—none, zero—and it completely totally depends on your relationship with the president,” Mr. Biden said.

The “modern” vice presidency that Mr. Mondale established and Mr. Biden solidified has the potential to remain permanent, both men agreed.

“This is all personal to the president. What we’ve seen over these last years in particular is that this is so spectacularly, obviously, the best thing to do to strengthen a president and make a president succeed,” Mr. Mondale said.