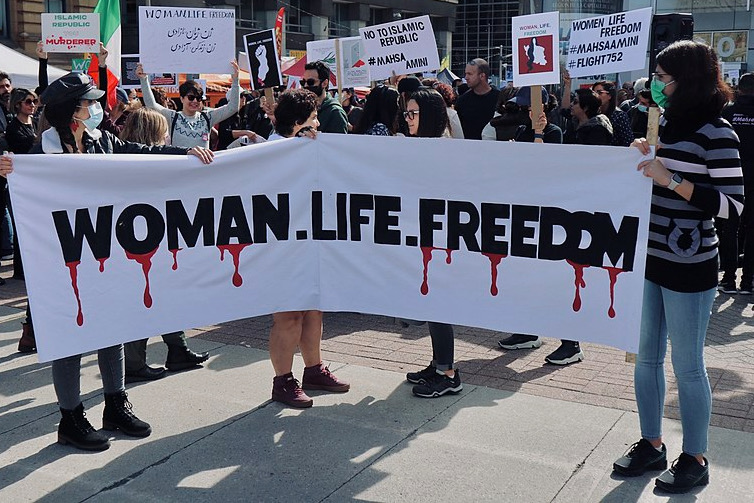 Protests across the world have taken place since the death of 22-year-old Iranian Mahsa Amini on Sept. 16. (Photo by Taymaz Valley)

George Washington University senior Melody Tajalli will never tire of shouting the same three words—women, life and freedom—no matter how many times she repeats them. She and millions of other people in the name of humanity and dignity have taken to the streets to protest an oppressive Iranian regime in the three weeks since 22-year-old Mahsa Amini died in custody of Iran’s morality police after being arrested for showing too much hair under her hijab, punishable by law in the country.

“Those words sound simple when you’re chanting them over and over again, but they never lose meaning,” said Tajalli, an international affairs major with a concentration in conflict resolution whose father is from Iran’s capital city, Tehran. “While we are able to scream those words here, someone else is dying for existing as a woman.”

Amini’s death on Sept. 16 has sparked an uprising in Iran, as women have taken to the streets and shed their hijabs, which they are required by law to wear in public settings, in a plea for their own autonomies and liberties.

“This is our time,” Tajalli said. “We need to keep the conversation going.”

President Mark S. Wrighton encouraged the community to support one another and said in a message that he has heard from students, faculty and others who are personally affected by the events in Iran and who fear for their loved ones.

“I have been reflecting on these messages and the passionate calls for freedom of expression and political protest and equal rights for women,” Wrighton said. “These are among the important values of our university, and they are critical to fulfilling our academic mission by encouraging rigorous discourse and ensuring all have equal opportunity to succeed.”

Amini’s death is the final line in the sand for a lot of people who have lived with the authoritarian Iranian government that came to power after the Iranian Revolution of 1979, when an Islamic republic overthrew the Pahlavi government that had made considerable progress in women’s rights. In the 40 years since, leaders of the new regime have incorporated a structure of discrimination into the law of the country, with women being the subjects of some of the most disproportionate burdens.

“People are simply fed up with tyrant ways of governing,” said Milken Institute School of Public Health Assistant Professor of Health Policy and Management Ali Moghtaderi, who is from Iran.

For example, a girl as young as 13 years old can marry, while girls even younger can legally marry with judicial and paternal consent. Women also inherit half of what a man would, and compensation for the death of a woman is also half. Also under current law, all hair and skin must be covered in public, an “offense” of that is subject to punishment.

That’s why these protests—with women risking their lives by directly disobeying current law to fight for their freedoms—have been so significant.

“A lot of them know they're going into it with the possibility of dying and with the possibility of facing precautions that may not be something they can come back from,” Tajalli said. “But for them, their freedom and their liberties and the future of women in Iran is more important, and that’s bravery that I just can’t even put into words.”

These protests have also come at a heavy price. Violent counteractions from the government and police forces have filled Iranian skies with smoke, fire and mourning. And there’s no way to truly account for all the damage, as the government has limited the country’s access to internet.

The Iran Human Rights Group reported on Oct. 4 that at least 133 people have been killed by authorities since the protests. That number could be much higher, Moghtaderi said, because access to information has been all but cut off.

On Oct. 2, Iranian police stormed the campus of Sharif University in Tehran, where Moghtaderi attended during his undergraduate years, and brutally beat and shot at students who were peacefully protesting. People he is still in contact with in Iran say, “it’s like a warzone.”

The scenes are unsettling, and the situation is mysterious and unsafe. Even speaking out against the government can lead to repercussions for not just the individual, but also for their friends and families, as a few GW students did not wish to be identified for this story to protect the safety of family and friends in Iran.

“[The Iranian government] knows that in order to control the society, they should basically control the process of sharing thoughts and ideas, and they have been very harsh on media and news outlets if you basically publish something that is just damaging to them,” Moghtaderi said. “More importantly, they can deny the knowledge of their brutality to the rest of the world. The playbook is the same. You see the same thing that Russia is doing with Ukraine’s war.”

The government, for example, has said illness rather than blows or beating caused Amini’s death despite her family saying she had no previous medical conditions. In addition, the journalist who broke the news of Amini’s death was subsequently arrested. From afar, Tajalli hopes fellow students and people in the GW community will use their social media accounts to learn about the situation in Iran.

The GW Iranian Student Association put out this statement on its Instagram page: “Our hearts are with the people of Iran who are affected by the current heavy events. If you are a GW student and need emotional support, we are here for you.”

The association also offered students a chance to direct message them for further conversation.

For members of the university community seeking support, resources are available through the Office for Diversity, Equity, and Community Engagement; Counseling and Psychological Services; Student Affairs; Human Resources; or Faculty Affairs.