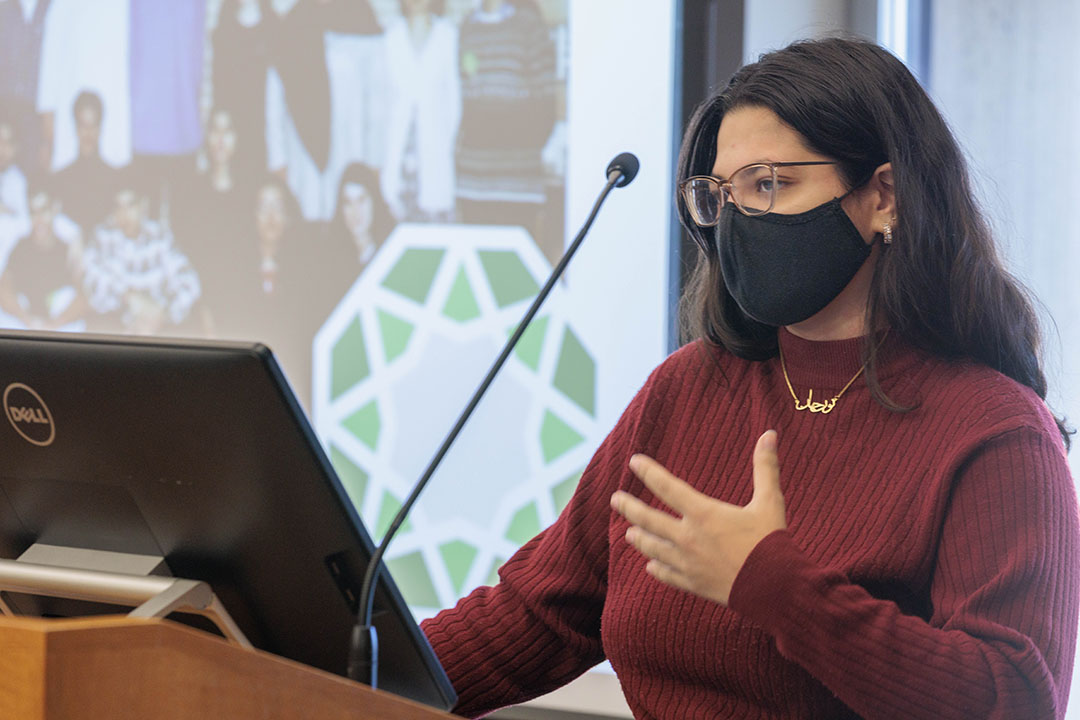 For much of its 200 years, George Washington University has been center stage for landmark moments in American history from the Civil War to the modern civil rights movement.

The capstone course—which culminates in a half-day conference where the class presents its findings to fellow students and scholars—delves deep into the GW vault. Showcasing their research skills and grasp of American Studies theories and concepts, the students investigate topics that connect the university’s past to their personal passions, whether they are charting the rise of AIDS activism in the 1980s or the influence of third wave feminism in the ’90s. With no subject matter off-limits—this year’s projects included the naming of the former Marvin Center and the displacement of the historically Black Foggy Bottom community—students often draw on their own experiences or tie primary sources and archival material to current events.

“The breadth of projects is fun to see,” said Guglielmo, who is also chair of the American Studies Department at the Columbian College of Arts and Sciences. “They explore all different angles on the university. And they are passionate about their topics.”

The course encourages students to train a critical eye on the university. “Dr. Guglielmo inspired us to interrogate this institution that we are all a part of, which is a brave and necessary feat,” said senior Simone Unger.

Guglielmo stressed that the projects aren’t intended to cast GW in a negative light. “The word ‘interrogating,’ while it can appear to be overly combative, is really more about being true to the core elements of the field of American Studies,” he explained. “I want them to draw on everything they’ve learned as American Studies majors.”

For example, when researching his capstone on how the AIDS epidemic transformed GW student life, senior Taylor Atkins discovered that GW was at the forefront of research and treatment in the D.C. area. The crisis galvanized the campus LGBT community, Atkins noted, shifting its concerns from mostly social gatherings to political activism.

Working with university archivists, some of Guglielmo’s students unearthed centuries-old primary sources, like the letters Unger discovered while researching the atmosphere at GW—then called Columbian College—during the Civil War. At one point, Unger handled a petition from the student body threatening to walk off campus if the school refused to forcefully support the Confederacy. “It was an honor to actually get to touch these documents from that time period,” she said. “It was also sort of surreal getting Civil War dust all over me.”

Parallels with the Past

Other students brought a personal approach to their projects. Noor Jehan Ansari, a junior who is completing her thesis before studying aboard, looked at the experiences of Muslim students on campus through the lens of her own tenure as president of the GW Muslim Student’s Association (MSA). Ansari said she often encountered conflicting ideas about what an MSA should be—from members who opposed hosting social events to others who promoted professional networking opportunities. “I was wondering why it was so hard to satisfy everyone,” she recalled.

Her project focused on how the MSA’s goals evolved since its 1980s founding. In its early years, she discovered, the MSA emphasized spiritual growth as students “became increasingly aware of their identity as Muslims at a predominantly white institution.” Post-9/11, the MSA focused on educating non-Muslims about Islamic awareness. In recent years, she said, the group has turned its gaze inward as members are eager to share their own stories of growing up Muslim in America. “There is not now—and really never has been—one idea about what a Muslim students’ association should be,” Ansari concluded.

When examining feminism on the GW campus in the 1990s, senior Kate Lesser drew parallels to events that still dominate the women’s rights landscape, such as the fight over abortion access and sexual assault prevention strategies. The feminist pioneers of the past, Lesser maintained, influenced today’s activism. The GW chapter of Students Against Sexual Assault, she noted, continues to prioritize educational and supportive services to address sexual violence on campus. “The takeaway is that progress starts at the ground level, and we can learn from the past,” she said. “We’re fighting a lot of the same fights with a similar mentality of community and group work.”

Guglielmo said the projects highlight critical thinking skills that can benefit his students in whichever professions they choose, showcasing “how practical this degree can be.”

“The ability to craft and defend a coherent, layered argument is something they can bring with them wherever they go,” Guglielmo said. Meanwhile, he hopes that students are energized by gaining new perspectives on their own surroundings. “This project is all about discovery,” he said. “It’s about the excitement of seeing something in a way they hadn’t seen it before.”