How Do Flying Snakes Soar through the Air?

Professor Lorena Barba and her team have created a computer simulation to better understand this reptile phenomenon.
March 5, 2014 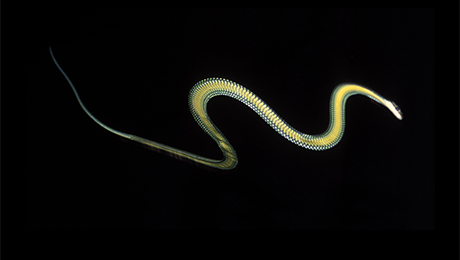 They slither, they sneak, they hiss, they…fly?

Don’t let their wingless bodies fool you—snakes in the lowland tropical forests of Southeast and South Asia can glide as far as 100 feet through the air. They push off from tree branches while rotating their ribs to flatten their bodies, making side-to-side movements as they glide.

Three species of snakes in the genus Chrysopelea are known to glide, and one, Chrysopelea paradisi, has even been seen turning in mid-air.

At least 30 independent animal lineages have evolved gliding flight, but the flying snake is the only glider without appendages, using a similar mode of locomotion to navigate the earth, water and air.

How are these reptiles able to sail from trees with such ease? And could understanding the physics of their flight help scientists solve other problems in the mechanical world?

Those are two questions that have intrigued Lorena Barba, associate professor of mechanical and aerospace engineering in the George Washington University School of Engineering and Applied Science, and Anush Krishnan, a research assistant at GW and Ph.D. student at Boston University.

To find answers, Dr. Barba and her team built a computer model—using one of the latest technologies in computing, known as graphic processing units (GPUs)—and used computational fluid dynamics to study the aerodynamics of flying snakes.

The two-dimensional model not only confirmed behavior that had been observed in previous experiments, but it also allowed the researchers to study the flight in greater detail. The study, titled “Lift and Wakes of Flying Snakes” and conducted at Boston University, appeared this month in the journal Physics of Fluids.

“The hope is that if you understand this aerodynamic mechanism, then you can find another application where it could be useful, some other design or device,” Dr. Barba said.

Her collaborator, Jake Socha, a biomechanics professor at Virginia Tech, has been studying and filming the movement of flying snakes for years, by launching them from cranes in their natural habitats. To begin to understand the aerodynamic characteristics of the snake body profile, his team built physical models made of tubing and tested them in a wind tunnel to measure the lift force of the flight.

These experiments revealed something unusual. Researchers expected the aerodynamic lift of the snake to increase with the angle of attack (the angle between the profile and the trajectory of flight) and then to drop suddenly after a stall. But Dr. Socha measured lift increasing up to an angle of 30 degrees, a sharp boost at an angle of 35 degrees, then a gentle decrease. This suggests that flying snakes use a mechanism called lift enhancement to get an extra boost, explained Dr. Barba. 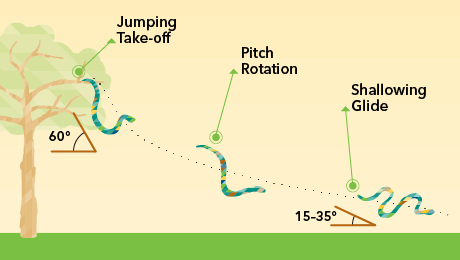 While the experimental study revealed a phenomenon—that snakes’ bodies create a lot of lift—a computer simulation could better explain how this phenomenon occurs.

“With simulation, you can really see the fine details of what is happening in the air as it moves around the object,” Dr. Barba said. “We decided it would be revealing to use this tool to find out, first of all, if we could observe the same feature of lift, and if so, if we would we be able to interrogate the flow by getting detailed quantities and visualizing it.”

Computer modeling acts as a “virtual microscope” for fluid mechanics, Dr. Barba said, and so the simulations enabled the researchers to zoom in very close to the body in order to understand how the air swirls around the snake. They saw that at certain angles of gliding, a snake’s curves can generate extra boosts of power. At this angle, small vortices, or whirlwinds, of air generated around the snake give it added suction.

While Dr. Barba and her team gained knowledge about the aerodynamics of flying snakes, they were only able to study a cross-section of the snake’s body that functions as the animal’s “wing.” Next, Dr. Barba hopes to construct a 3D model of the snake to investigate how and why the snake wiggles in the air as it flies.

She believes that an explanation of the snake’s flight could have the potential to offer solutions for real-world problems.

“It’s not wild to think that our understanding of the fluid mechanics of this particular shape could lead us to, for example, design a different type of air flow that is ideal for energy harvesting, or a wind turbine—or who knows,” Dr. Barba said. “You find applications in unexpected places.”

In January, the technology company NVIDIA, which manufactures the GPUs used for Dr. Barba’s computer simulations, recognized GW as a CUDA Research Center. CUDA is a parallel computing platform and programming model created by NVIDIA and implemented by the GPUs that they produce. NVIDIA recognizes and collaborates with research groups that are “expanding the frontier of massively parallel computing.”