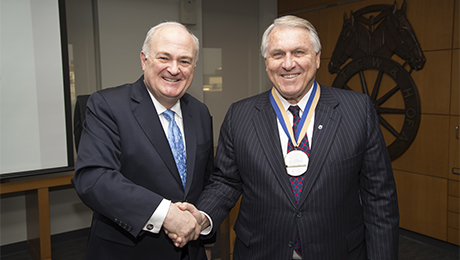 A seminal moment in James P. Hoffa’s life took place on his 18th birthday, when he received a unique gift that would shape his life’s work: a union membership card, presented to him by his father, James R. Hoffa, general president of the International Brotherhood of Teamsters.

The younger Hoffa — who has since established himself as a leader of organized labor, serving as a Teamster attorney from 1968 to 1993 and general president from 1999 to present day — has dedicated his career to the advancement of workers and the preservation of union history. On Wednesday, the George Washington University honored Mr. Hoffa with the President’s Medal in a ceremony at the International Brotherhood of Teamsters Labor History Research Center inside Gelman Library.

“George Washington is proud to honor Jim Hoffa as a passionate advocate for social justice and the labor movement, as one of the foremost experts on labor issues, and also as a dedicated partner and friend of this university,” GW President Steven Knapp said. “I’m especially pleased we’re able to hold the ceremony here. This center is a tangible result of our shared commitment with the International Brotherhood of Teamsters to preserve the heritage of America’s labor movement.”

GW and the Teamsters launched a joint initiative in 2008 to build an educational and research environment to explore the roles the American labor movement in general and the Teamsters in particular have played in the development of the United States. The records of the International Brotherhood of Teamsters serve as a foundational collection to this initiative. The idea for an archive began, Mr. Hoffa said, with the Teamsters’ 100th anniversary celebration in 2003.

“That was the beginning of our talking about ‘How do we preserve Teamster history?’” Mr. Hoffa said. “What we are doing today is really commemorating this great museum and what we have here. This place is important because it embodies our history.”

“We have contracts going back to 1906 that talk about what each person gets for mucking the stalls and taking care of the horse,” Mr. Hoffa said. “For us to preserve it is so important, because somebody has to preserve this, and I can think of no better place than George Washington University.”

Mr. Hoffa grew up on picket lines and in union meetings, and began his career with the Teamsters as a laborer in Detroit and Alaska. A recognized voice on issues that affect working people and one of the foremost authorities on union issues, Mr. Hoffa has been appointed to several committees by Presidents George W. Bush and Barack Obama, including President Bush’s Council on the 21st Century Workforce and President Obama’s Department of Labor Advisory Committee for Trade Negotiations and Trade Policy.

“I’ve had the honor of working for General President Hoffa for 15 years,” said Teamsters communications director and GW alumnus Bret Caldwell, B.A. ’92, M.A. ’96. “I cannot tell you how many times I’ve seen him talk or listen to members who often simply want to be heard. In 15 years he’s never walked away from a member.”

Established in 1988, the George Washington University President’s Medal is bestowed by the president of the university to recognize individuals who have exhibited courage, character and leadership in their chosen fields and who exemplify the ability of all human beings to improve the lives of others. Previous recipients of the award include musicians Dave Brubeck and Judy Collins, journalist Walter Cronkite, philanthropist Albert H. Small and Nobel laureates Mikhail Gorbachev and Shimon Peres.

“Today, being here with so many people that have been involved with this project, it’s very moving,” Mr. Hoffa said. “The recognition by this university of the Teamsters union is not for me; it’s for the Teamsters.”