U.S. Reps. Will Hurd and Deb Haaland say it takes leadership, organization and communication to gain the attention of young people.
March 12, 2019 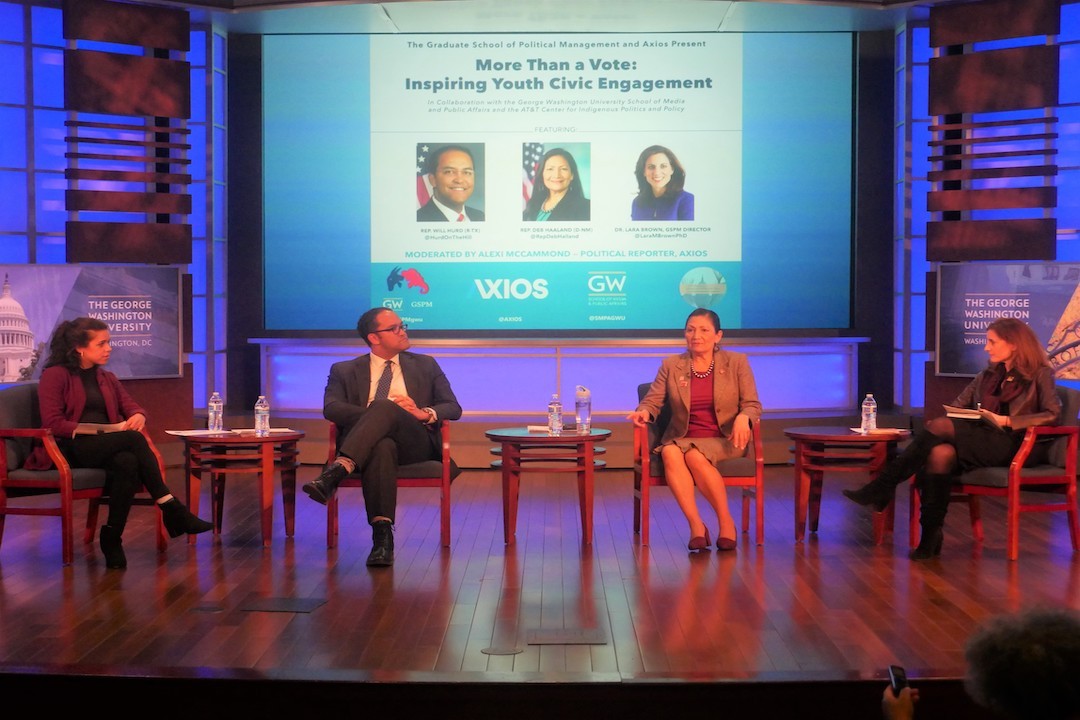 How do you get young people to turn their activism and social media presence into civic engagement in politics?

A panel at the George Washington University’s Jack Morton Auditorium discussed possible answers to the question even as they disagreed on the premise that young people are politically disconnected.

Leading the discussion, moderator Alexi McCammond, an Axios political reporter, noted that a recent analysis in The Atlantic magazine reported that young people were disillusioned with voting and found activism, volunteering and engaging digitally more effective than voting.

The panel featured U.S. Reps. Will Hurd (R-Texas) and Deb Haaland (D-N.M.) and was titled “More Than a Vote” and was sponsored by the GW Graduate School of Political Management in collaboration with the School of Media and Public Affairs and the AT&T Center for Indigenous Politics and Policy. The panel also included Lara Brown, director of GSPM.

Ms. Haaland, one of the first two Native American women elected to Congress, took exception to the idea of young people’s lack of political engagement, especially for youth in the Southwest. She said her daughter would often say “We are voting. We are engaged,” and mentioned that one of her high school classmates, now 24, ran for mayor of Albuquerque, “activating a lot of volunteers, all of his high school friends.”

Dr. Brown pointed out that polls show young people between the ages of 18 and 29 made up just 13 percent of the electorate in the 2018 midterms. She said older voters have more of an incentive to be involved.

“As you get older, you acquire property, you have children that are going to school, you are interacting with the health care system, and you’re paying taxes so the issues that politics are about become personal,” she said.

“There’s a lot of discussion about voting, about why young people need to vote, but there’s not much discussion about what do you do after you vote, how do you stay involved in politics, what does it mean to be engaged as a young person in our political world.”

Mr. Hurd said the problem is that the professional political class tends to focus on likely voters, the same people over and over, and therefore reach the same results.

“Guess what? Voting is the floor of civic engagement not the ceiling. People should do more than just vote,” he said.

People don’t always know what else they can do besides vote, Mr. Hurd said, because it doesn’t occur to them that they can help by making phone calls for candidates, raising money and knocking on doors.

Ms. Haaland said about 200 people volunteered to do just that in the last two weeks of her campaign when polls showed her behind by 3 points in her congressional race. She attributed that to the 20 years she spent organizing people in the election campaigns of others.

“Leadership matters,” Ms. Haaland said. “The ward chairs, the precinct chairs, the people on the ground, the state party chair, you’re out there working as hard as anybody else inspiring people to take a stand … to realize that they have the power to change things.”

The panelists mentioned other reasons that young people’s political engagement on social media may not carry over into election campaigns: lack of motivational issues, misinformation spread on social media sites and voter suppression.

Mr. Hurd said the good things that happen in national politics are often underreported and challenged the audience to guess how often members of the last Congress collaborated on legislation. Few knew that, according to him, all but 15 of the 995 pieces of legislation passed during the last Congress did so with bipartisan support.

“The message of 2018 was actually a rebuke to both parties,” he said. “It was the American people saying, ‘Go up there and get something done that helps the country.” he said.

Both Congress members thought that was reflected in the highly competitive races each faced in the midterms.

Dr. Brown saw it in the growing number of youth movements such as Black Lives Matter, DACA and the students from Parkland, Fla., turning “hash tag activism into real political change, legislative policy changes by talking to members of Congress and state legislators.”

Ms. McCammond asked if either of the members of Congress had ever been swayed by activists’ campaigns.

Mr. Rep. Hurd said he no longer texted while driving after being approached by the group Students Against Distracted Decisions. Ms.  Haaland credited the passage of gun legislation in New Mexico to the 10,000 people who showed up for March for Our Lives, a demonstration organized by students.

In closing remarks, Wendy Helgemo, director of the Indigenous Politics and Policy Center, reminded the audience that four years ago another group of young people marched from the Standing Rock Indian Reservation to Washington, D.C., and succeeded for a time in blocking a natural gas pipeline from going through the reservation. 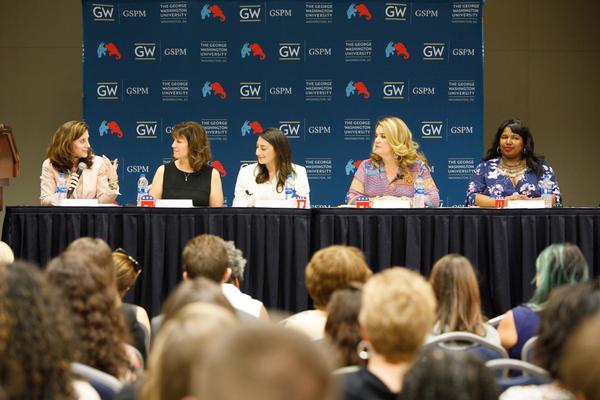