GW Moves Ahead with Next Phase of Campus Plan 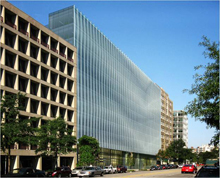 George Washington University is beginning plans to move forward with a project outlined in the 2007 Foggy Bottom Campus Plan. The university is initiating the zoning process to redevelop several GW-owned investment properties on Pennsylvania Avenue to maximize the value of the real estate in support of the university’s academic and research mission.

The redevelopment will include a previously identified campus plan site, Site 75A, which includes six properties—2134, 2136, 2138, 2318 ½, 2140 and 2142 Pennsylvania Ave.—that will be demolished. In addition, the university will redevelop the adjacent building—2100W Pennsylvania Avenue—currently occupied by Kaiser Permanente, which intends to vacate in October 2012. The university will combine these sites to create a more efficient development and maximize the value of its investment in support of the university’s mission. The project’s construction is not expected to begin until 2014.

“Kaiser Permanente’s departure provides a unique opportunity to expand the adjacent development site so that the university can better utilize its investment properties to ensure long-term contributions to its endowment,” said GW Executive Vice President and Treasurer Louis Katz.

The 2007 Foggy Bottom Campus Plan identified this area of the campus for commercial or investment property, said Alicia Knight, senior associate vice president for operations. GW plans to partner with an experienced third-party developer who will be responsible for development of the property—similar to The Avenue (Square 54)—in order to generate non-tuition-driven revenue for the university’s academic mission.

Affected tenants have been aware of the potential for redevelopment of the site since the Foggy Bottom Campus Plan was approved in 2007.

University officials recently met with the tenants to share information about the university’s future plans, including the estimated demolition date of early 2014. The university will share project updates when available and will continue to include a six-month early termination provision in all future leases to ensure that tenants are properly notified.

At an Advisory Neighborhood Commission meeting on Wednesday, university representatives discussed the plan and answered neighbors’ and residents’ questions.

GW will file its application to the Zoning Commission in early 2012, and expects a hearing in summer 2012.