GW Alumna Is Student-Athletes’ Choice for Professor of the Year 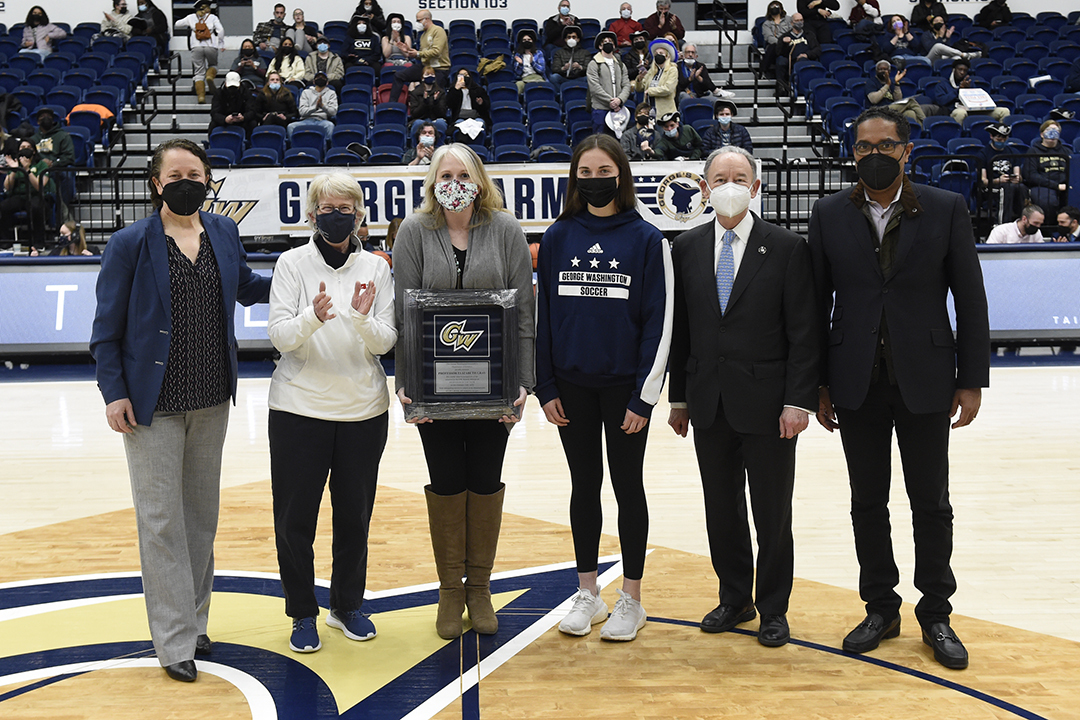 Gray,  a teaching assistant professor of health policy and management and the undergraduate Public Health Program director at the Milken Institute SPH, received the recognition from GW’s student-athletes last Wednesday at halftime of the GW-George Mason University women’s basketball game at the Smith Center.

“My first and last varsity letter,” said Gray, who received the letter along with a plaque recognizing her as the 2021 Choice for Professor of the Year. “I was thrilled, very pleased and delighted. I was not a student-athlete and am the least coordinated person to exist.”

She was joined during the presentation by GW President Mark S. Wrighton, Provost Christopher Alan Bracey, Athletics Director Tanya Vogel and Faculty Athletics Representative Beverly Westerman. The night was a celebration of the academic achievement of nearly 400 GW student-athletes who have earned a GPA of 3.0 or higher, including 21 student athletes who earned a 4.0 in the spring 2021 semester and 22 who did so in fall 2021.

“A lot of student-athletes are in our [public health] program,” Gray said. “They are some of the hardest working students, managing many things all at once and very exceptional, as all of our students are exceptional.”

Students in all sports are asked each year to submit nominations for the award, which goes to the professor who makes the greatest contribution to the academic success of GW’s student-athletes. Once nominations are closed, the student-athletes vote to get a professor of the year and five finalists.

Gray was escorted to the Smith Center floor by Sarah Patton from the Women’s Soccer team, a first-year student in Gray’s First-Year Experience in Public Health class.

“She definitely deserved [the honor],” said Patton, who nominated Gray for the award. “She was very lively and engaging with the class. She also had a good sense of humor.”

Patton, who plans to major in nutrition and public health, said Gray emphasized how helping the community and global health can be “inspiring,” the “many different career paths the major offers and advises students “majoring in public health to make it your own,” whether health policy, health law or nutrition.

For a first-year student who found college generally intimidating, Patton said Gray provided information about different resources and tools available to students and brought in guest speakers from the study abroad office, and career and academic centers.

Another student in the same class, Michelle Ojo, a member of the women’s basketball team, also took Gray’s Introduction to Public Health and Health Services. “It’s nice to have a professor that challenges you to grow and learn academically and personally,” she said.

On the first day of class, Ojo said, Gray told them that they were “the future of public health” and drove the point home by “allotting time during class for students to write down questions and critiques that she would address to give them a better understanding of the opportunities and services available to us.”

In an interview after the halftime ceremony, Gray said that any faculty at Milken SPH could have talked to the students about public health and related careers. “Now, since the pandemic, the average person in the U.S. is more familiar with what public health is,” she said. “That is great that this discipline is getting some attention and some understanding of all the things it does to contribute to society.”