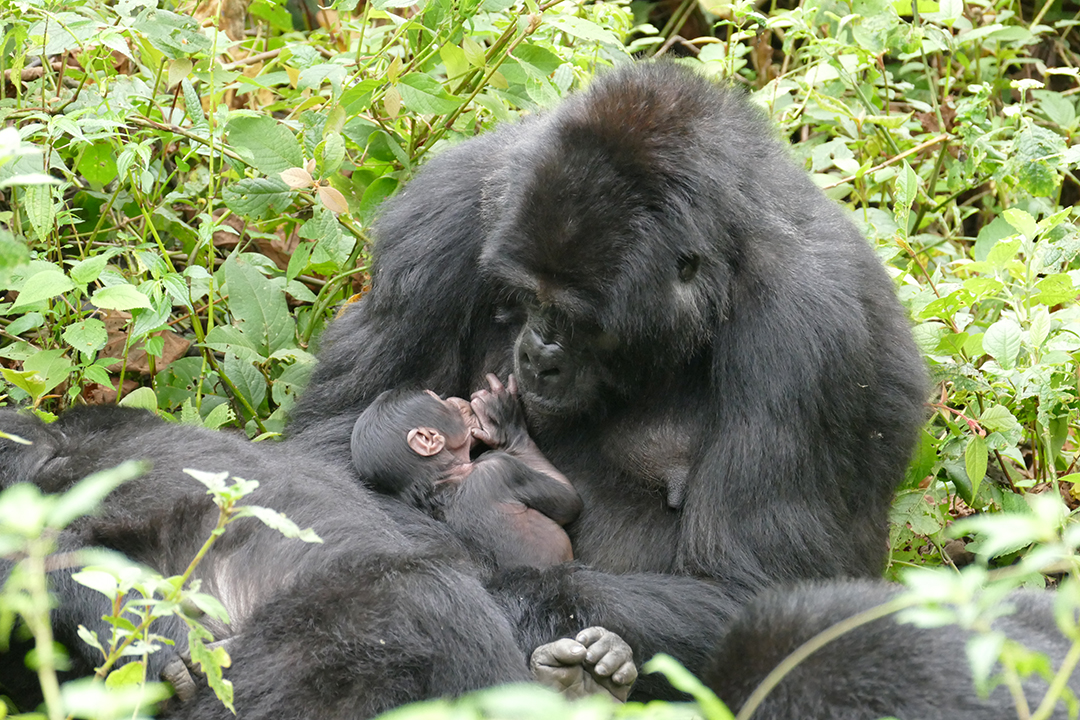 GW researchers are involved in a new collaborative study that aims to characterize variability in weaning within and between populations of African great apes. (Photo: Martha M. Robbins)

A Columbian College of Arts and Sciences researcher is leading a new collaborative study that aims to characterize and understand variability in weaning within and between carefully studied wild populations of African great apes.

Researchers will collect data on living individuals to study weaning in modern ape populations and determine how this reflects our understanding of ape weaning in the past.

It will be the first major grant-funded collaboration between the Gombe Stream Research Centre, established by anthropologist Jane Goodall, and Rwanda’s Karisoke Research Center founded by Dian Fossey. The project also involves close collaboration with the national parks authorities in Rwanda, Uganda and Tanzania, non-governmental organizations, veterinary groups and scientists at other international institutions.

As these research sites are among the world’s longest-term study sites for wild great apes, each has detailed records on all apes born into observed groups over the past several decades, going back 50 years or more at Gombe and Karisoke. This will help experts document variability in weaning patterns, both among individual apes and among sites. 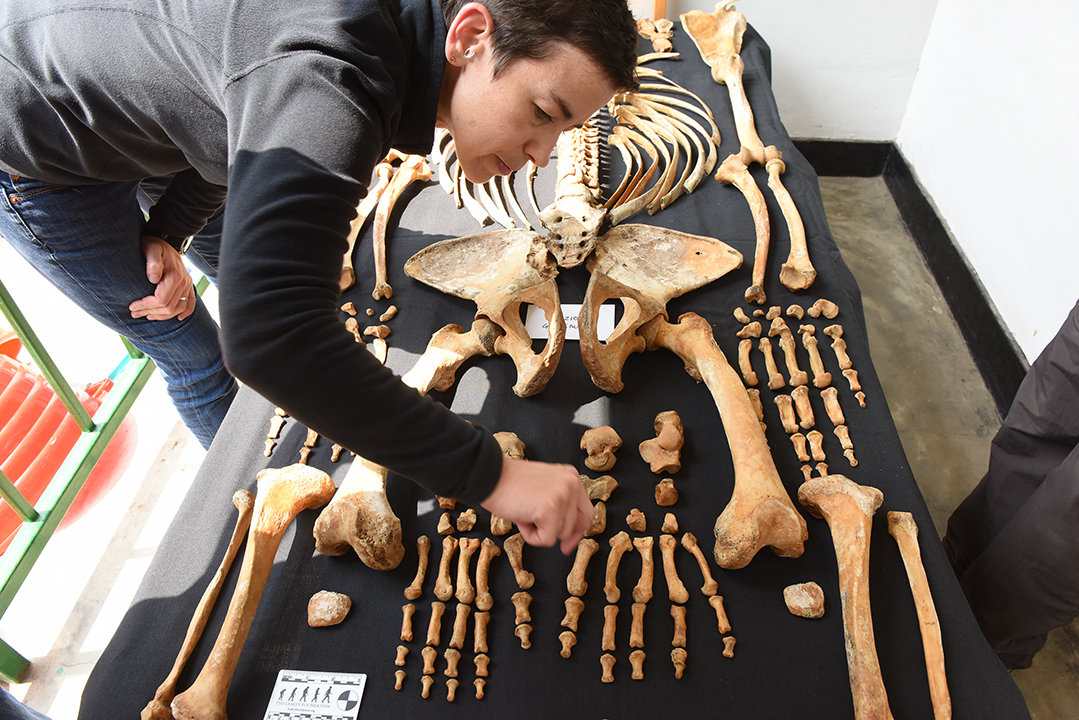 As part of this project Shannon McFarlin will analyze skeletal remains to observe the timing of weaning along with dental and body development of individual apes. (Photo: Mountain Gorilla Skeletal Project)

Dr. McFarlin’s primary role in this project will be working with the anatomical data. She will analyze hard tissue, such as teeth, in skeletal remains from individuals at all three sites to observe the relationship among the timing of weaning and other metrics of behavioral, dental and body development. She will do this by analyzing the age of tooth eruption and the microscopic structure and chemical composition of hard tissues, which change over the first few years of life based on diet. As part of this effort, Meagan Vakiener, a GW doctoral candidate, was recently awarded grants from the National Science Foundation, The Leakey Foundation and The Wenner Gren Foundation to support her dissertation research, which examines weaning-related changes in the trace element composition of teeth in Virunga mountain gorillas.

Carson Murray, associate professor of anthropology at GW, is also a collaborator on the project. She co-manages the behavioral database on mothers and infants at the Gombe site.

At the three long-term study sites, researchers can reference skeletons of individuals whose lives were documented from infancy to death, including records on their feeding. Skeletal analysis, and analysis of other data on body size and dental development, will be completed in Dr. McFarlin’s GW lab. The university was awarded nearly $400,000 from the National Science Foundation for this collaboration.

The large amount of existing data on well-studied individual apes makes this project a rare opportunity for researchers to test the assumptions they make when reconstructing life history from the fossil record.

“We’re really interested in learning more about the biology of weaning in living apes and also using this as an opportunity to test the reliability of some of the proxies that we can now use to reconstruct evidence of weaning in the fossil record based on skeletal remains,” Dr. McFarlin said. “What we learn from this research will be potentially transformative for our ability to reconstruct the evolution of weaning in humans with confidence.”

These apes typically rely on their mothers for nutrition one to three years longer than human children. Most of the existing knowledge about ape weaning is from observed behavior, but scientists believe there are social components that play a role in weaning, Dr. McFarlin said.

Recently scientists have begun measuring the stable isotope composition of fecal samples to evaluate the nitrogen profiles of mother and child. As the chemical profile of fecal samples between the two individuals become more similar, researchers conclude that the infant’s diet resembles the solid food diet of adults.

“This gives us a more physiologically based metric of weaning,” Dr. McFarlin said. “It allows us to look more carefully at the nutritional aspect of suckling.”

A better understanding of the weaning process can inform conservation efforts as well. Once a mother stops investing energetically and nutritionally in supporting one infant, she is able to begin investing in the next pregnancy, Dr. McFarlin said. This makes weaning one determinant of birth spacing.

“Having a better understanding of reproduction and fertility in these endangered populations of apes is important in our ability to understand both the potential impact of conservation measures that are put in place to protect them, as well as how they might be expected to respond to climate or environmental change in the future,” Dr. McFarlin said.

Documenting weaning behavior in apes also will help researchers understand how human weaning strategies evolved. Once apes are weaned from their mothers, the young forage for their own food. This clearly diverges from human behavior in which parents still provide food for their young children. 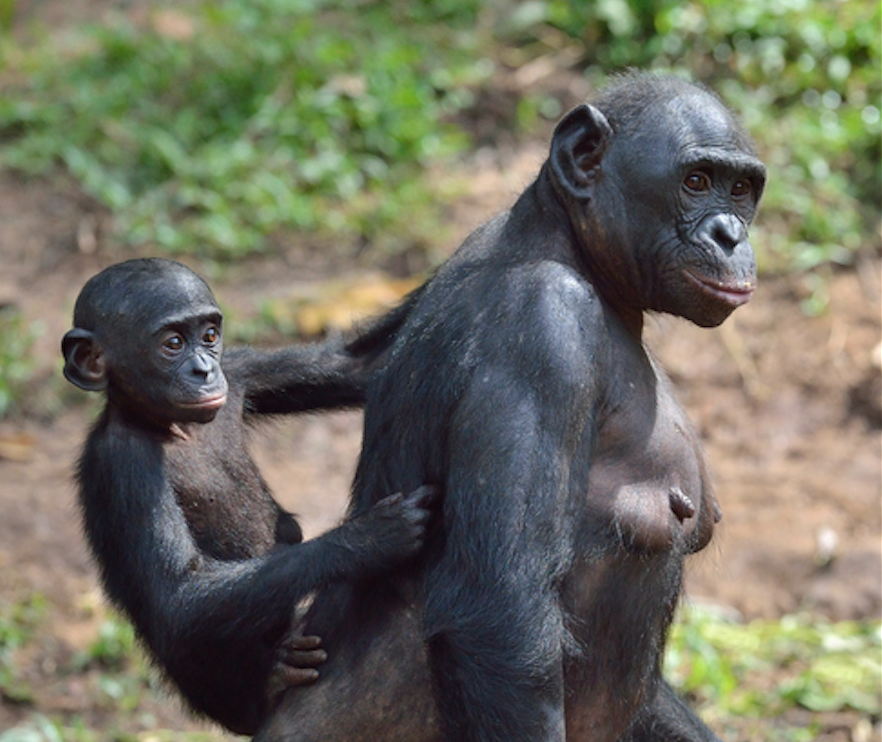