Rory Muhammad oversees compliance with the law that governs issues like sexual harassment and gender equity in sports.
February 25, 2015 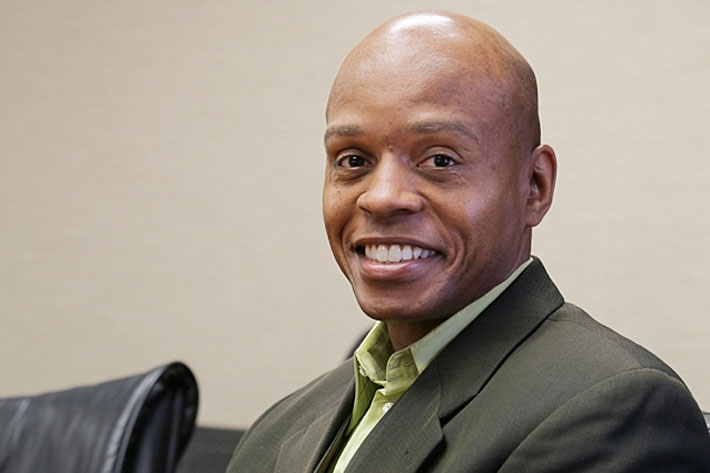 In November, Rory Muhammad joined George Washington University as Title IX coordinator in the Office of the Vice Provost for Diversity and Inclusion. With the federal statute on gender equality taking center stage in public discourse, George Washington Today reporter Ruth Steinhardt talked with Mr. Muhammad about the work of his high-profile position.

What exactly is Title IX?

Title IX is the federal law that requires gender equity in every educational institution or program that receives federal funding. [For more on the law, check out the National Center for Educational Statistics’ fact sheet.] Most organizations take voluntary steps to make themselves more inclusive. But in tandem with that, because of historical inequalities, there are mandatory legal requirements that can at least create the possibility of an even playing field. Title IX is one of those.

What are a university’s responsibilities with regard to Title IX?

The university is responsible for making sure that no gender-based discrimination or harassment affects a community member’s ability to participate completely in the life of the university—whether as a student, staff member or faculty member. If someone’s Title IX rights are violated, the responsibility of the institution is to make that individual whole as best they can and to restore a safe and equitable environment. So to be compliant with Title IX, a university has to remove any pressure or hostile environment that is impeding someone’s right to learn and work.

So what’s the role of a Title IX Coordinator?

The role of the Title IX office is to coordinate all the different departments that do a part of this work. That means the police department, the office of student affairs, the general counsel, the housing department, athletics, human resources—all of these may have to deal with a question of Title IX compliance in their realm. So what we do is align all the policies and procedures across those realms, so that every single allegation gets addressed.

When it comes to sexual assault, part of our job is to make sure that the options for complainants are available and publicized. When an allegation takes place, we empower the complainant with resources: whether that person wants to file a criminal claim, for example, or an administrative complaint, or just take advantage of personal or medical resources. We also have respondents—the accused—and we ensure their due process rights as well.

But as important as it is to have a response strategy in place, it’s just as important to have our prevention strategies in place. We want to provide the community with skills and tools that prevent Title IX violations from happening. That means potential assaulters, potential victims, potential bystanders, everybody. So the office also coordinates some of the preventative steps of training, getting the message out, talking about what does consent really mean—educating the whole community.

What do you think people should know about the GW policy on sexual harassment?

Well in general, one of the most important parts of addressing these issues is making sure that reporting options are readily available and clear to the entire community. Where someone can go, whom he or she can talk with. Who do I go to for strict confidentiality? Who do I go to if I’m considering bringing forth a claim against someone?

To whom could someone go in those different situations?

For complete confidentiality, the counseling center and medical practitioners on campus—anyone serving in a counseling capacity with a counselor’s license is granted automatic confidentiality by law. Also religious representatives, clergy and personal attorneys.

Another option is that we have some university employees with a higher reporting responsibility. They are mandated reporters, meaning that any report made to them goes to the Title IX office and to the GW Police Department. Right now, the GW policy lists department heads, deans, staff supervisors, senior associate provosts, deans of student affairs, the Title IX coordinator and the assistant Title IX coordinator in this category.

As Title IX coordinator, I weigh a complainant’s wishes seriously. So if the information gets to me and the complainant says, “but I don’t want to do anything about it,” I put a lot of weight on that. The only thing that I would balance it with is the potential threat to the greater community. So if there’s a pattern here where the alleged perpetrator or respondent has a history of these allegations, or there’s the potential threat of violence to someone else in the community, I have to take that into account too.

The Department of Education has emphasized Title IX a few times in the past couple of decades—they issued revised guidelines for the statute in 2001 and wrote a “Dear Colleague” letter to institutions in 2011. Do you think the legal or social landscape around Title IX changed during those years?

To me it’s like a perfect storm right now for Title IX. You have media attention around these issues. You have student activism around the issues. You have President Obama who has made it a part of his platform. And then with that, you began to have survivors coming forward, because as the discussion increases, people feel able to step forward and say, “Me too.”

There were some really shocking cases, too, that had a lot of publicity. Someone was found responsible for violating the school’s sexual misconduct policy, and they had to write a paper, and that’s it. Or a perpetrator got suspended for a semester, but by the time the university reached that finding, there were only two weeks left in the semester. So those two weeks were counted as the suspension, and the person came back the next semester. Hearing about those types of cases added fuel to people’s outrage.