Advocates and politicians, including House Democratic Leader Nancy Pelosi, celebrated the exhibition at a reception at the Corcoran.
March 13, 2017 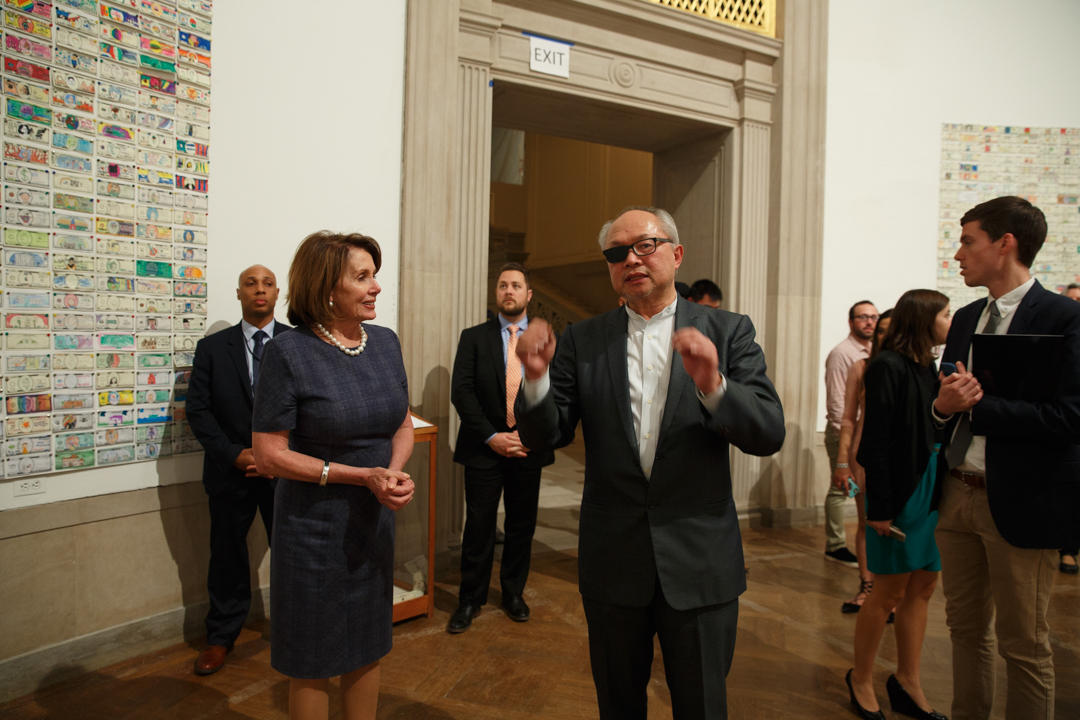 But don’t count on seeing Benjamin Franklin anywhere—these are “Fundred” bills, an invented currency hand-drawn by communities across the country to symbolize the invaluable price of protecting kids from lead poisoning. A two-ton door made of wood and stainless steel protects each painstakingly created piece of paper, and wall-sized photo investigation depict the presence of lead in D.C. neighborhoods and pipes.

These elements make up the "Fundred Reserve,” an exhibition at the Corcoran School of the Arts and Design organized by inaugural William Wilson Corcoran Visiting Professor of Community Engagement Mel Chin. 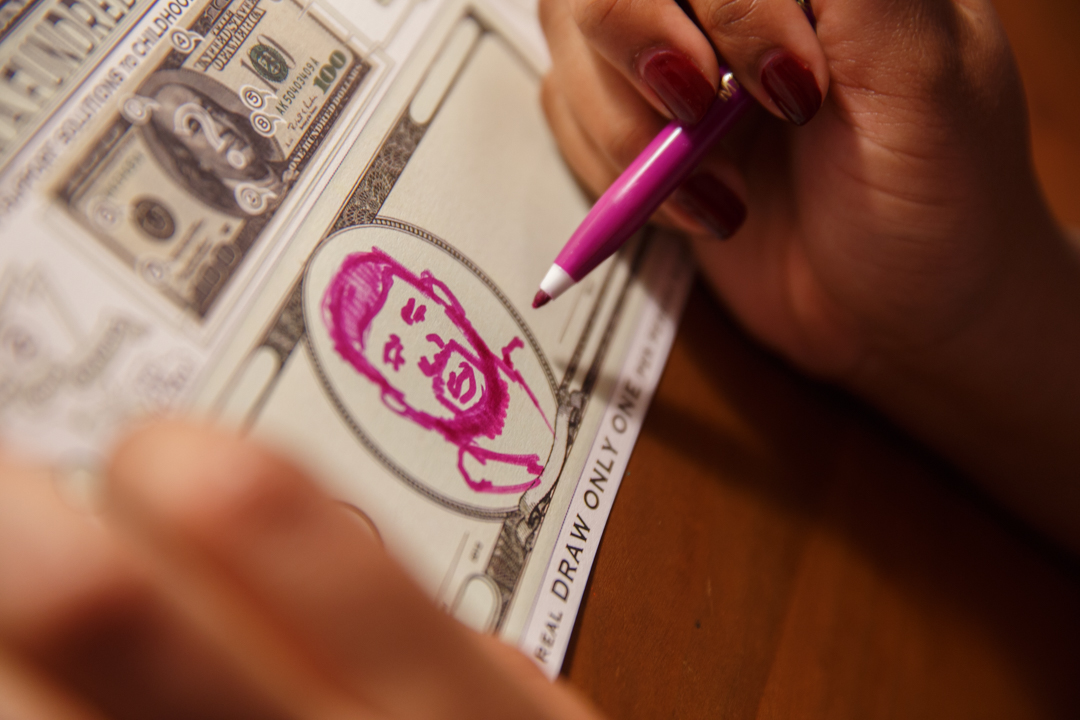 Fundreds are a "currency of the imagination." (William Atkins/GW Today)

The show is part of Mr. Chin’s collaborative Fundred Dollar Bill Project, which he created in 2008, after learning that in post-Katrina New Orleans, 30 to 50 percent of the inner-city childhood population had been exposed to lead poisoning before the storm. There was no funding to address the problem.

With the help of MIT Co-Lab, several universities, museums, nonprofit organizations, lead poisoning prevention organizations and thousands of schools throughout the United States, Mr. Chin began engaging communities and asking them to draw Fundred bills, a “currency of the imagination” that puts individual creative expression on display while building into a collective amplified voice against the gravity of lead poisoning.

Fundreds have been displayed at the Contemporary Art Museum in Houston, the New Orleans Museum of Art and in other art spaces across the country. Nearly half a million people have made their own bills in at least 1,250 registered schools nationwide.

On Thursday, the George Washington University celebrated one of the biggest Fundred exhibitions yet during a reception attended by advocates who have been at the forefront of lead prevention policy, including House Democratic Leader Nancy Pelosi (D-Calif.) and Rep. Dan Kildee (D-Mich.) and environmental activist Melissa Mays. The exhibition officially opened on Feb. 23.

Mr. Chin spoke at the event, explaining the well-known effects of lead poisoning on behavior, learning development and child health.

“I think the Fundred represents the value of the human voice singularly directed against something that can destroy that voice,” he said. “The project is all about currency and fun and appropriations. . .to represent  those who have very little money but all of the risks.”

Following a long day on Capitol Hill, Ms. Pelosi stopped by to praise the initiative for bringing attention to an important cause. She was part of a bipartisan congressional effort that appropriated $170 million in 2016 to prevent lead poisoning following the water crisis in Flint, Mich.

“The arts can be the place, the vehicle to bring people together. They are a place where we share laughter, tears, enthusiasm,” Ms. Pelosi said. “As the poet Shelly once said, ‘The greatest force for moral good is imagination.’”

Mr. Kildee, whose district includes Flint, Mich., added, “What [this exhibition] does, especially for those here in Washington who don’t have a connection to my hometown and places like Flint, is make it really clear that there is a very high cost to not protecting those kids."

When the project first started in 2008, Mr. Chin and his team transformed an unoccupied house in the lead-plagued neighborhood of St. Roch into Fundred headquarters, called the Safehouse. The door on display at the Corcoran School originally came from that space. 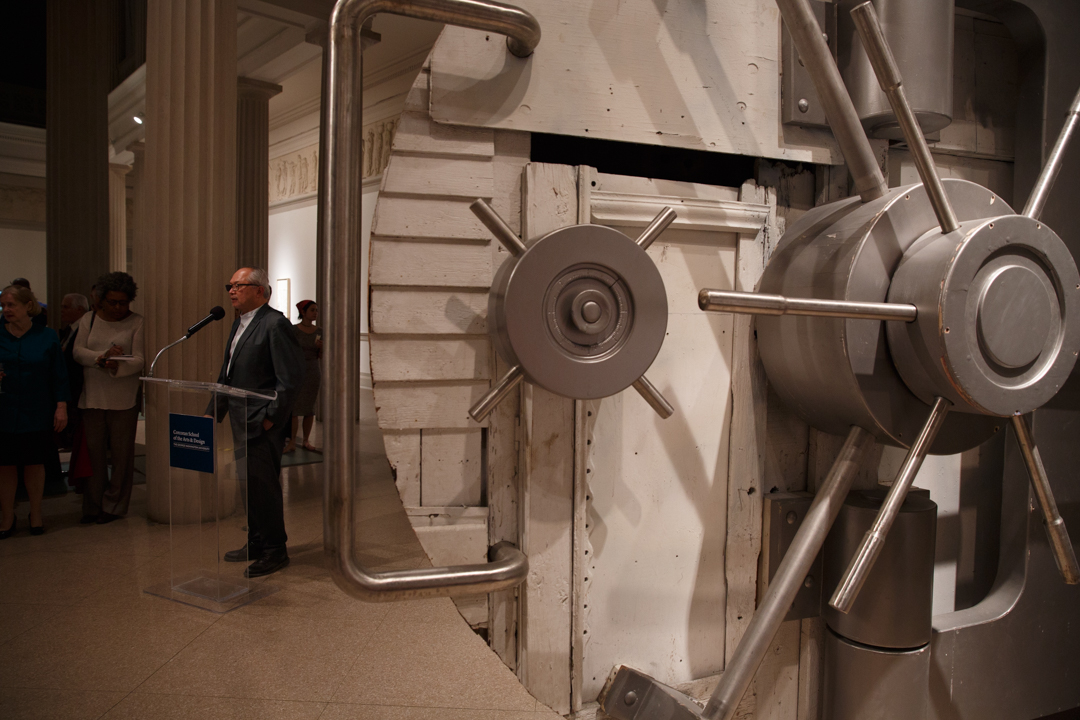 The original doors from the Safehouse. (William Atkins/GW Today)

The "Fundred Reserve” exhibition is in keeping with the Corcoran’s mission of community engagement. Corcoran students had the opportunity to work with Mr. Chin as the project was implemented in more than 46 local schools, in collaboration with the District of Columbia Public Schools (DCPS) Arts, to make Fundred bills currently in the show.

The Fundred Armored Truck—that had traveled 20,000 miles to pick up Fundreds from around the country –was recently deployed to deliver thousands of handmade D.C. bills to the Corcoran School. While areas of the exhibition—including the Safehouse door and objects in Gallery 1—will come down this week, the Fundred display will remain in the rotunda through mid-May. Visitors can download a template online to participate or pick up templates at Corcoran School.

“This is a pivotal moment in the Corcoran's history as we increase our investment in a community devoted to making critical inquiry. As the inaugural William Wilson Corcoran Visiting Professor of Community Engagement, Mel Chin has invested in this community and its mission through a provocative project that has spanned over 10 years and deals with one of the most significant environmental issues of our time: childhood lead poisoning,” Corcoran School Director Sanjit Sethi said. 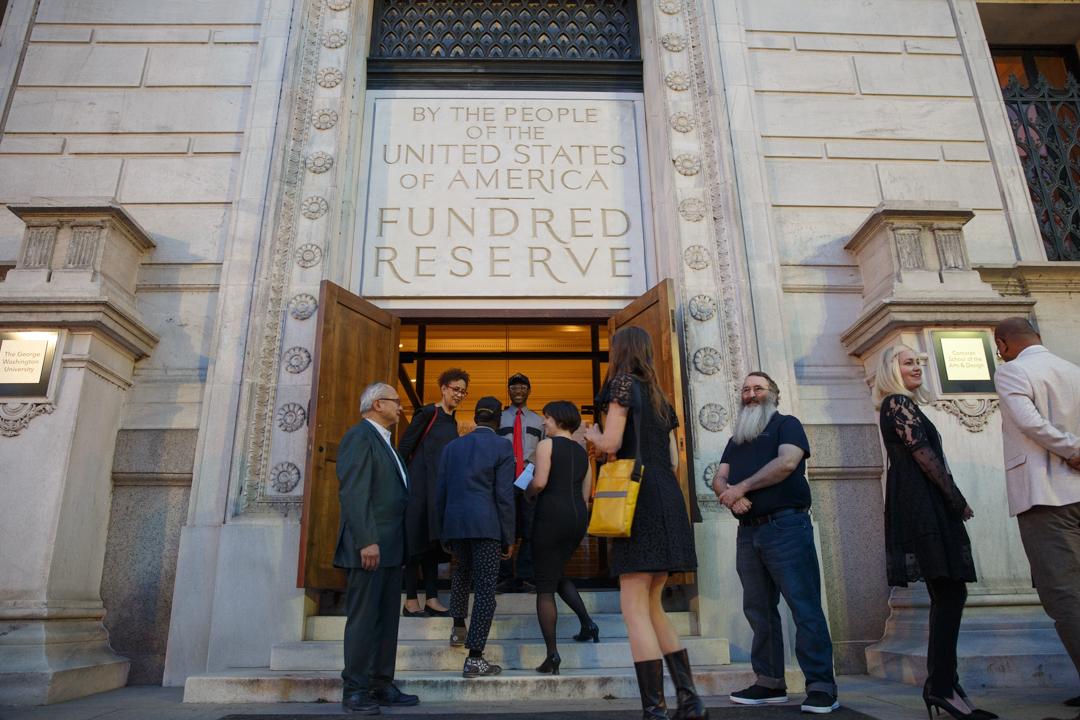 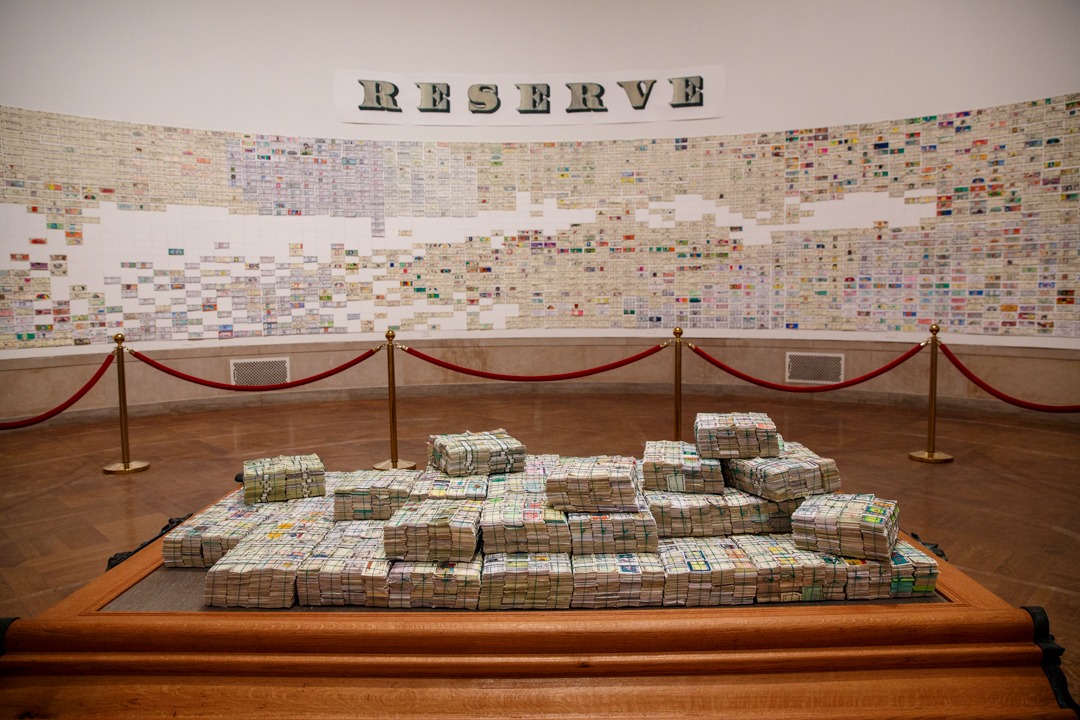 The "Fundred Reserve" on display at the Corcoran School. (William Atkins/GW Today) 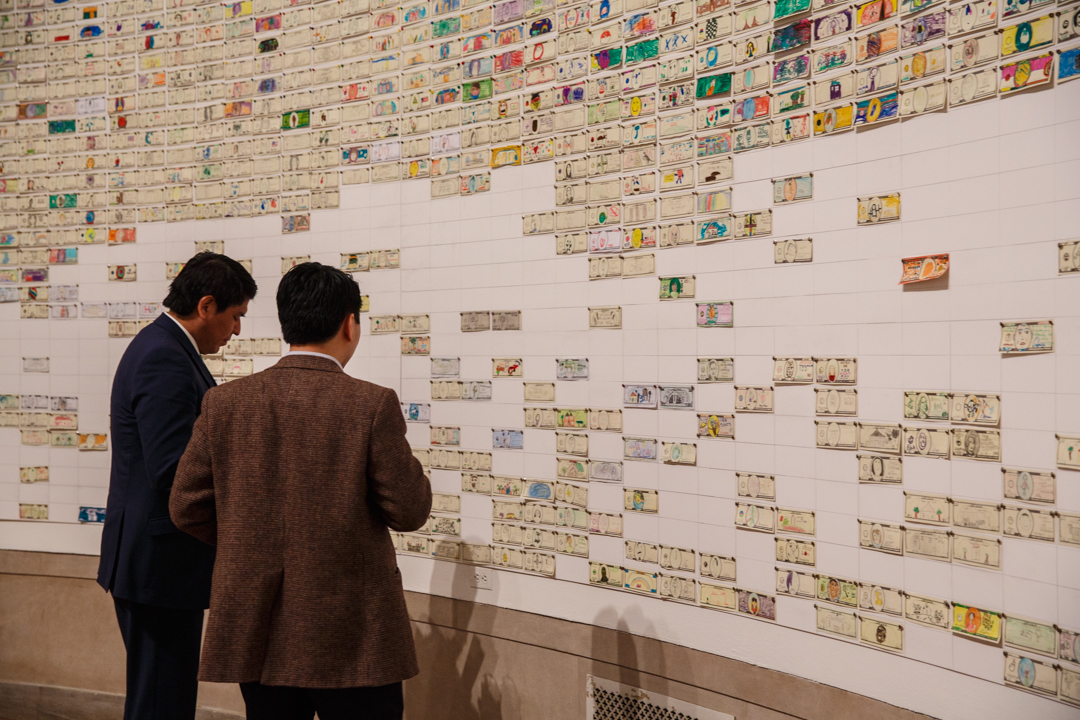 Visitors at at the "Fundred Reserve" exhibition. (William Atkins/GW Today) 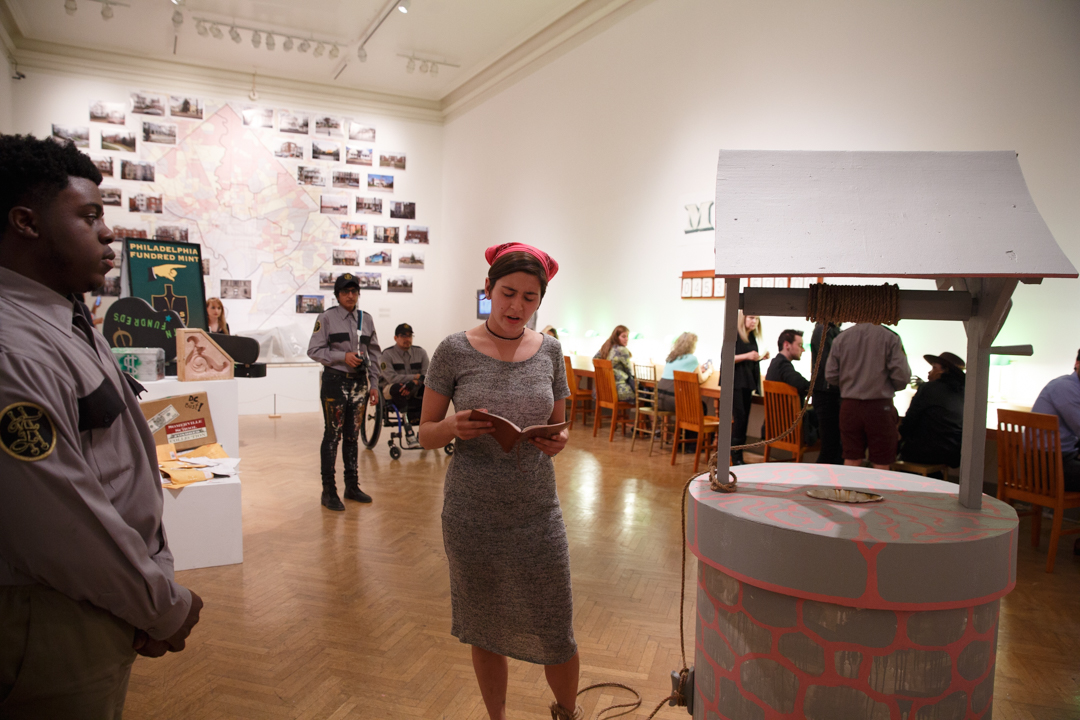 Members of the GW and D.C. community attended a reception for the exhibition on March 9. (William Atkins/GW Today) 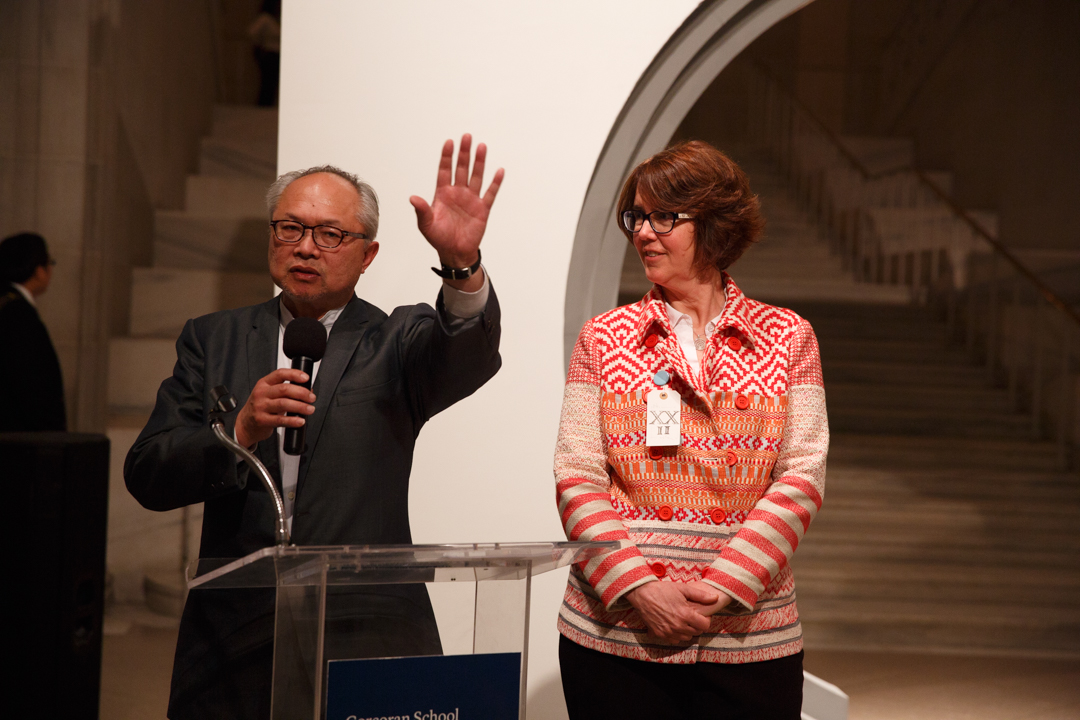 Mel Chin speaks at a reception for the "Fundred Reserve." (William Atkins/GW Today) 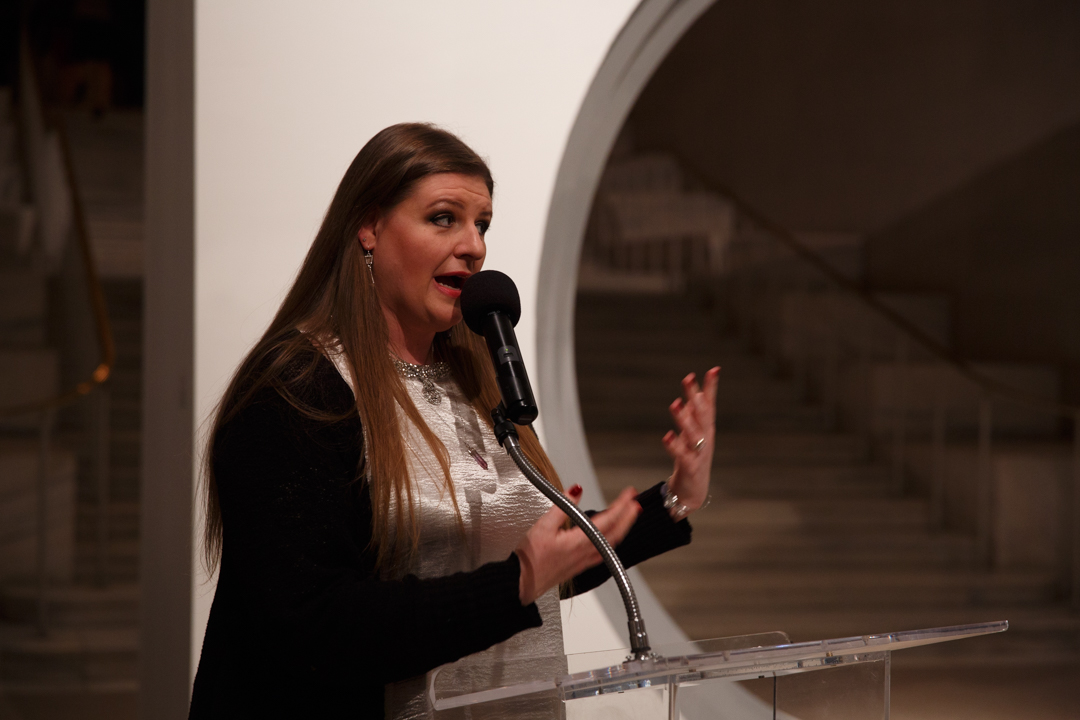 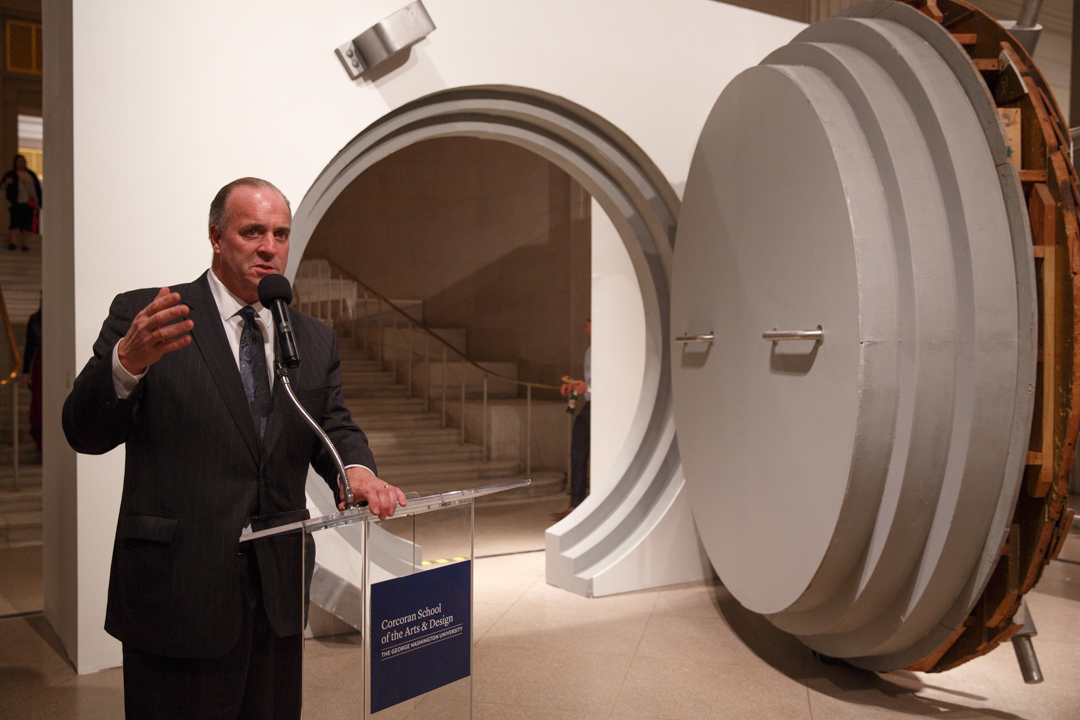 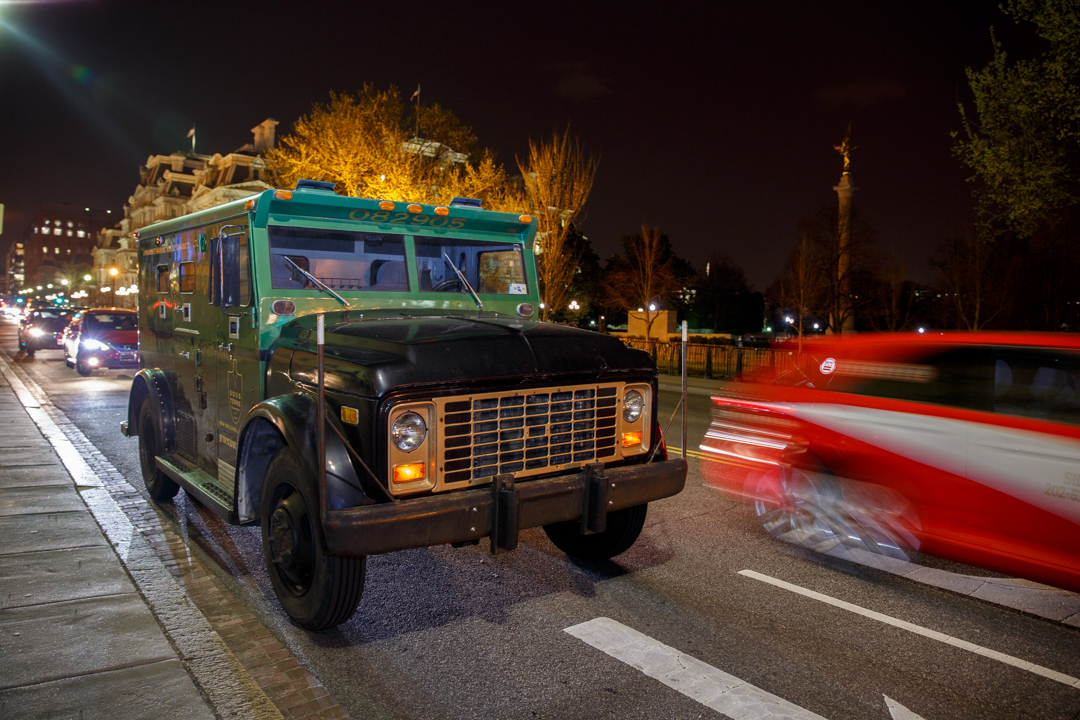 The Fundred Armored Truck traveled 20,000 miles to pick up Fundreds from around the country. 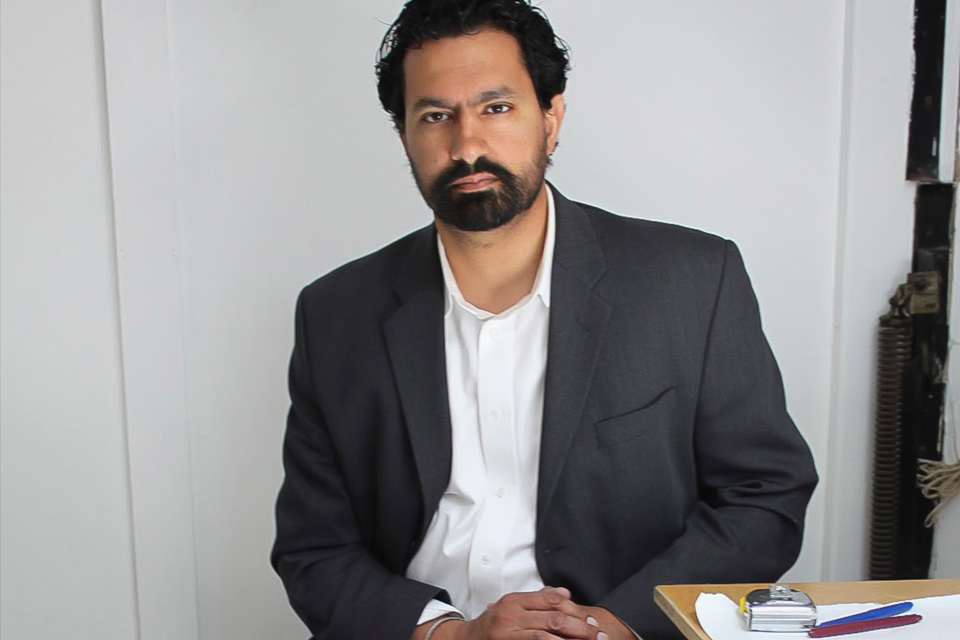 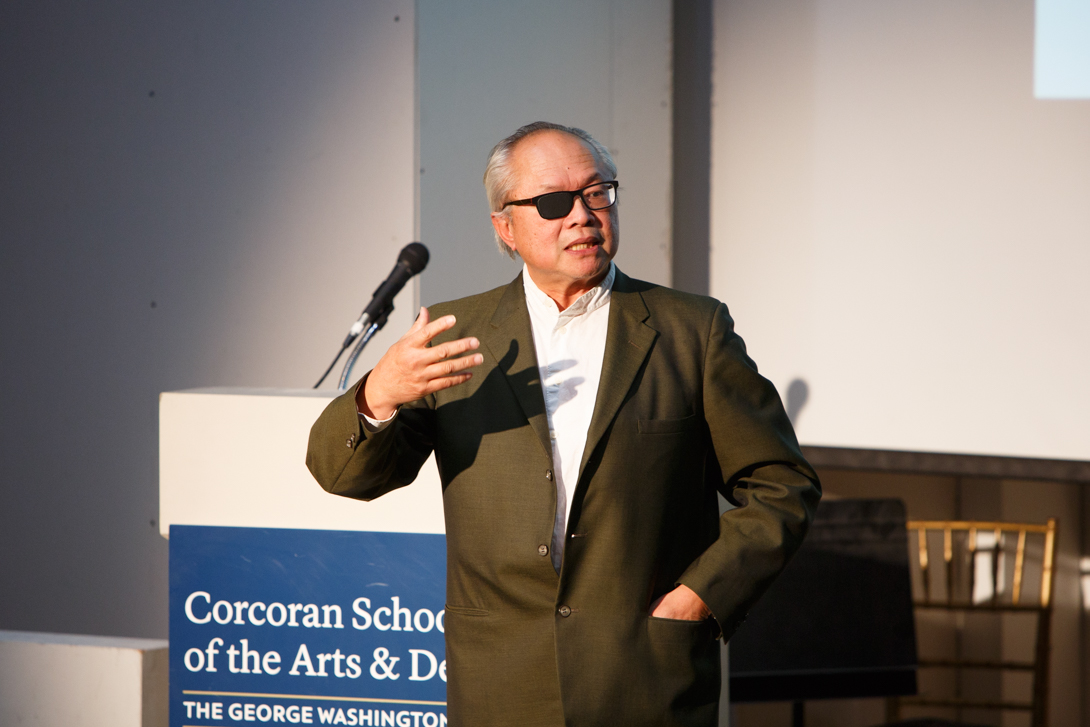 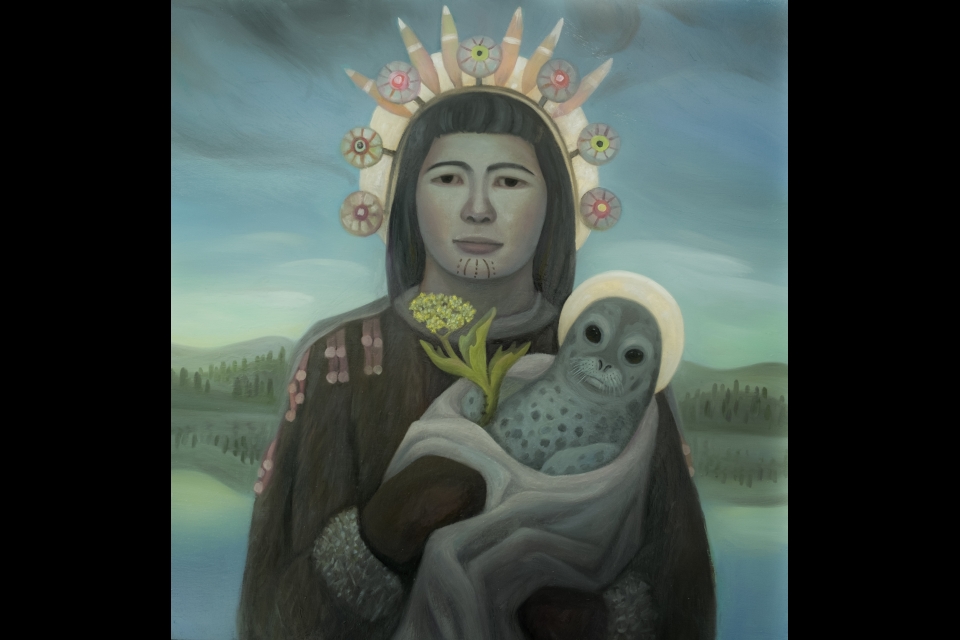