Enrichment seminar hosted by Graduate School of Education and Human Development tightens focus on ‘unfinished project’ of American education.
May 27, 2016 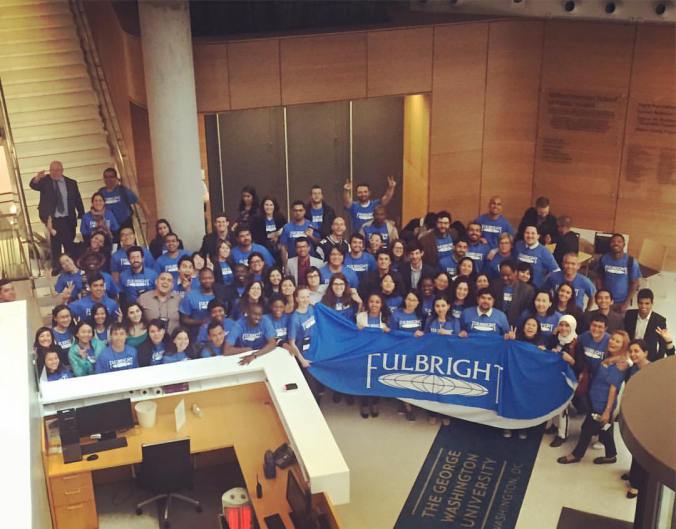 The George Washington University has historically been a top producer of Fulbright Scholars, sending teachers and researchers across the globe as ambassadors of learning. Last month the university played host instead, welcoming Fulbright Scholars from around the world to an enrichment seminar on the American educational system.

At “Educational Justice: Overcoming Barriers to Quality Education in the 21st Century,” hosted by the Graduate School of Education and Human Development, 91 participants from 49 countries—including Afghanistan, Kyrgyzstan and Nicaragua—and a range of educational specialties gathered for a weekend of discussion and activity.

“[At GSEHD] we want to promote educational justice in various ways, so we’re committed in spirit to the ideals implied in the title of this seminar,” said James Williams, UNESCO Chair in International Education for Development and associate professor of international education and international affairs at GSEHD. Dr. Williams and his team proposed and organized the seminar.

Dr. Williams said the point of the seminar was not to hold up the United States as an exemplary educational model but to frankly discuss the successes and failures of what he called “the unfinished project” of American educational justice with students from a variety of backgrounds.

“International education refers to many things, but one is the exchange of ideas and people,” he said.

The brainchild of GW alumnus and U.S. Sen. J. William Fulbright, LLB ’34, the Fulbright Scholarship Program provides funding for study and research abroad in a range of disciplines. The Fulbright Enrichment Seminars, coordinated by the Institute of International Education and the U.S. Department of State, are an opportunity for Fulbright Scholars to network and to discuss site-specific issues related to their field of study.

At his keynote address on April 27, GSEHD Dean Michael Feuer discussed the “pluses and minuses” of the American educational project, including its fraught history and its complicated goals. Among other topics, he discussed the role education played in forging a unified national identity from a population of immigrants.

“Public education was the most significant institution that did the work associated with making it possible for those immigrants to integrate into American life…without having to give up their ethnic, religious or national heritage,” Dr. Feuer said.

He also said the ceding of educational oversight to state and local authorities has led to vast disparities in the qualities of schools and outcomes, including what he called “the continuing disaster” of educational obstacles faced by populations of color.

Participating scholars did more than listen. After breakout sessions on the seminar’s second day, they split into groups organized by area of interest and visited 12 sites around the city. A group focusing on diplomacy, for instance, visited the State Department and the United Nations Foundation; another, focusing on primary and secondary education, stopped at School Without Walls and Maury Elementary School in Capitol Hill.

The scholars also took in a quintessentially American pastime: a baseball game at Nationals Stadium.

“As an outsider, the whole thing, the game, the music, the food and the people and how they cheered, was a nice social observation opportunity for me,” Hatice Altun, a participant from Turkey, wrote in a blog post.