Professor Eric Cline and his team have uncovered an essential piece of an ancient mystery in northern Israel.
November 22, 2013 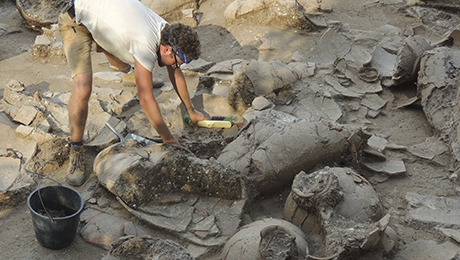 GW alumnus Zach Dunseth removes dirt and debris from ancient wine jars while excavating the ruins of a Canaanite palace that dates back to approximately 1700 B.C. (Photo by Eric Cline)

A George Washington University professor and a team of excavators have unearthed what could be the oldest and largest palatial wine cellar in the Near East.

It was uncovered at the 75-acre Tel Kabri site in northern Israel, the capital of a Middle Bronze Age Canaanite kingdom that dates back to approximately 1700 B.C., where some of the earliest-known Western art in the eastern Mediterranean has already been found.

GW Professor of Classics and Anthropology Eric Cline has been excavating the Canaanite palace every other summer since 2005, slowly digging up artifacts that provide a unique link between ancient Israel and Greece.

This latest discovery has led him one step closer to putting together a 4,000-year-old puzzle. 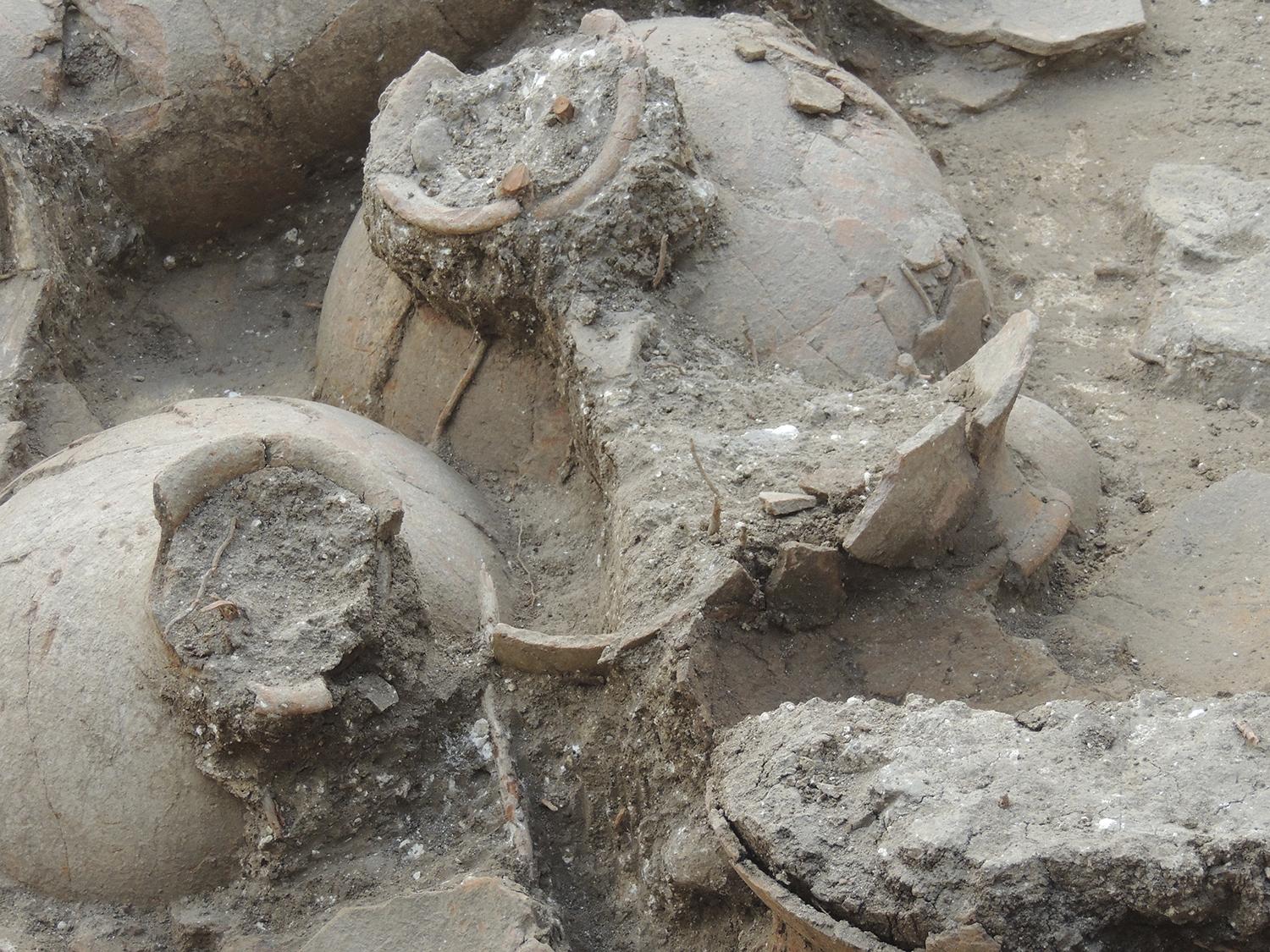 These 3,700-year-old jars were discovered in an ancient palatial wine cellar unearthed by researchers at Tel Kabri in July 2013. The team worked in day and night shifts to excavate a total of 40 intact vessels during its six-week dig. 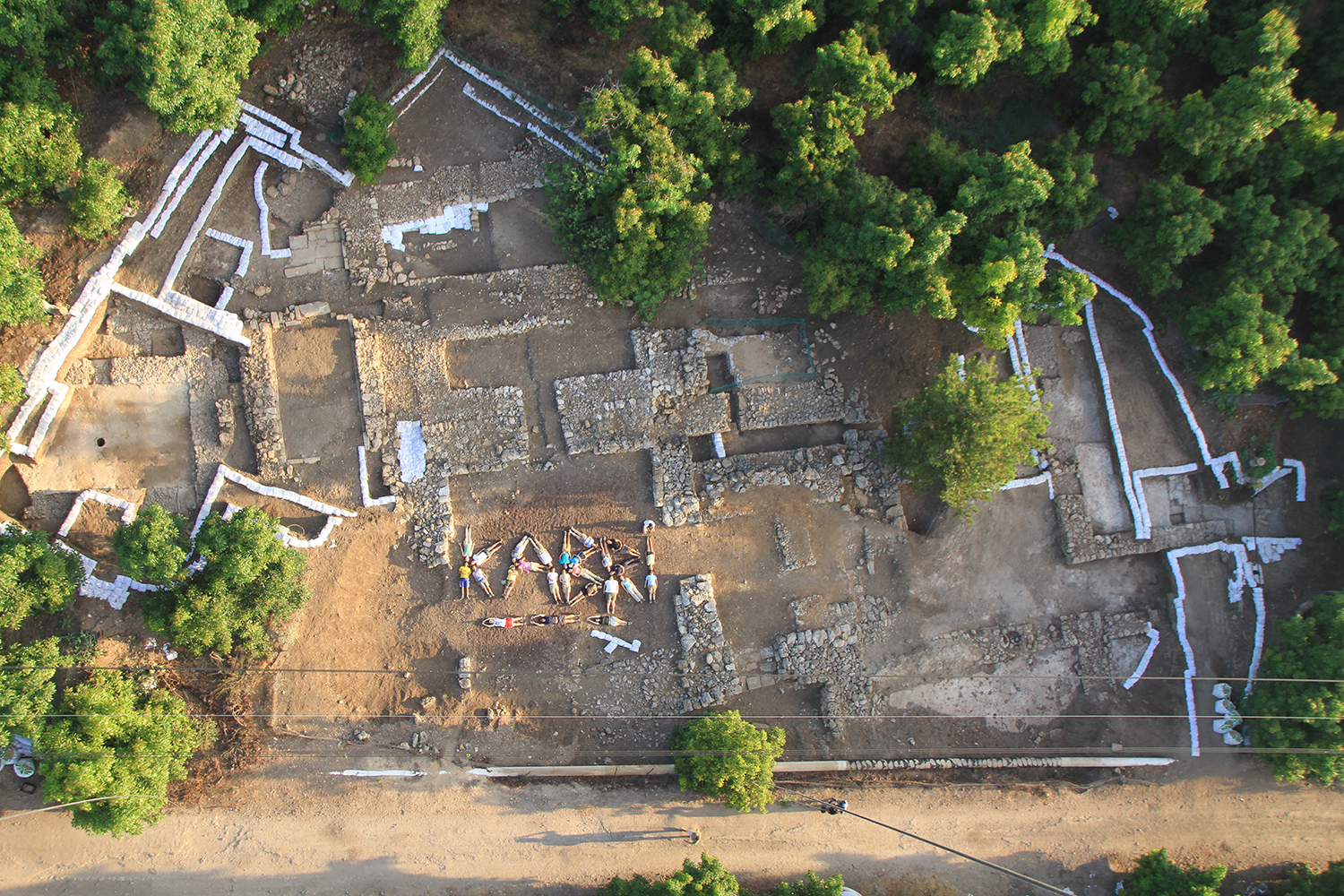 An aerial view of Tel Kabri, a 75-acre site in northern Israel that houses the ruins of a Canaanite city dating back to approximately 1700 B.C. Researchers discovered a large wine cellar there while studying the areas in and around the palace to obtain clues as to what drove the economy of the area. 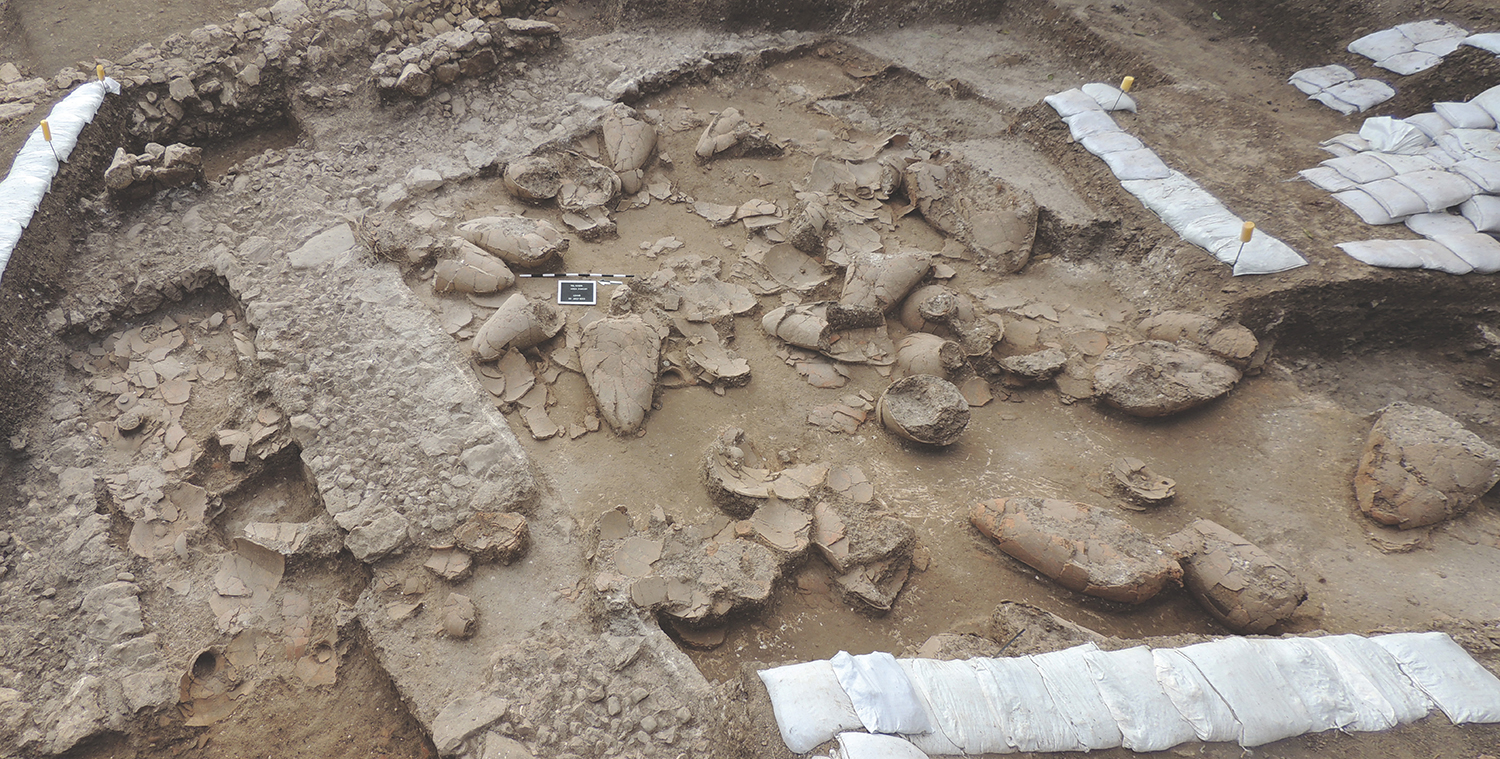 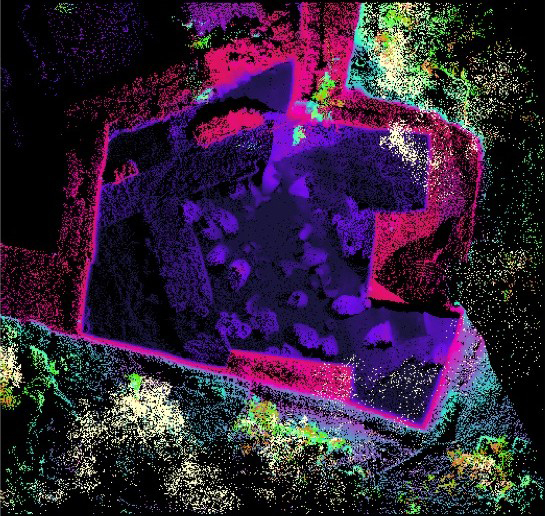 This image of the Tel Kabri wine cellar was created using LiDAR, a technique that uses a pulsed laser to measure distances and generate an accurate 3D map of a location. LiDAR helped the archaeologists map the storage room.

It was the second day of a six-week expedition this past summer, when the international team of 60 students, faculty and volunteers uncovered a three-foot-long, ceramic jar, later nicknamed “Bessie.”

“We dug and dug, and all of a sudden, Bessie’s friends start appearing—five, 10, ultimately 40 jars packed in a 15-by-25-foot storage room,” said Dr. Cline, who led the team with his co-director Assaf Yasur-Landau, of the University of Haifa.

But by the time the group realized how many jars were inside the western area of the Canaanite palace, the excavation period was halfway over. Digging them completely out of the earth—where they had been buried for three millennia—became a race against time, especially since the small room could not accommodate all of the team members excavating at once.

“Once they were exposed, we had to get all 40 of them up. If we had left them, they wouldn’t have even survived the winter,” Dr. Cline said.

So they decided to do something unorthodox. Half of the group would dig during typical hours—from 5 a.m. to 1 p.m.—while the other half would dig from 2 p.m. until 7 p.m., enduring the excruciating July heat.

With two days to spare, the very last jar was pulled from the dirt. And with the added manpower, the team was not only able to excavate the jars quickly and in an orderly fashion, but also to take samples for organic residue analysis and petrography.

Using residue analysis back in the United States, Andrew Koh of Brandeis University found traces of tartaric and syringic acids in the samples, which means he was able to confirm what Dr. Cline and his team had suspected: The ancient jars once contained wine. He also discovered other additives in the samples, suggesting the presence of both local and possible imported ingredients popular in ancient wine-making, like honey, mint, resin and juniper berries.

The team also used LiDAR—a remote sensing technology—to map out the entire room with the jars in place. The team now has thousands of data points, so they can reconstruct the room and even measure the capacity of the jars without ever pouring liquid in them.

The 40 jars have a capacity of around 2,000 liters, meaning the cellar could have held the equivalent of nearly 3,000 bottles of red and white wines.

“It is a wine cellar that, to our knowledge, is largely unmatched in its age and size,” Dr. Cline said.

But what Dr. Cline found most intriguing is the wine cellar’s connection to ancient texts.

Mari was an ancient Sumerian and Amorite city, located on the Euphrates River. It was discovered in the 1930s, along with a large group of tablets, which give information about the kingdom and its inhabitants. The tablets detail the king’s wine cellar, and they reference the very additives that were found in the Tel Kabri wine jars.

“We have a physical manifestation of what you can read about in the Mari tablets,” said Dr. Cline. “Does that mean this wine was imported from the Euphrates? Possibly, but not necessarily. But it is still cool that something we’ve known about only from texts for decades, we now have scientific proof of its existence.”

Still, many questions about the wine cellar, and the palace itself, remain unanswered.

Putting Tel Kabri on the Map

While the Tel Kabri building is a “palace” by sheer size, Dr. Cline is hesitant to definitively say it was ruled by a king or queen—since no such evidence has ever been found.

“Somebody had to have the manpower and the money to build it. And usually, only a ruler could do that,” he said. “Personally, I think it’s royal. But there’s no proof for it yet.”

The site was discovered in the 1960s when work for an irrigation pipe cut through the area. Tel Aviv professor Aharon Kempinski and his partner,Wolf-Dietrich Niemeier, began digging at Tel Kabri in 1986.

What put Tel Kabri “on the map” was when the archeologists discovered a floor and wall frescoes painted in an Aegean manner within the palace. It’s as if people living in Crete had come over to Israel 4,000 years ago to paint, suggested Dr. Cline.

“They brought over interior decorators,” he said. “Why Canaanites would have been interested in Minoan art is a good question. We don’t know.”

Dr. Kempinski died unexpectedly in 1994, and his project came to a sudden halt. The site remained untouched until 2003, when Dr. Yasur-Landau of the University of Haifa did remote sensing and discovered that the palace was much bigger than archeologists had originally thought.

Preliminary excavations began in 2005. A few years later, the professors received money to do a multi-season expedition, and Dr. Cline has been bringing a team of excavators—which includes GW students, alumni and faculty—to dig at Tel Kabri every other summer since 2009.

During that first dig, Dr. Cline and his team uncovered painted fragments that indicated a connection to Bronze Age Aegean culture. And in 2011, the team found “beautiful carved stones” on the outside edge of the palace, which had never been found still standing in place in such a Middle Bronze Age building in Israel before. “Again, Cretan influence,” Dr. Cline said.

Three sites—in Egypt, Syria and Turkey—are the only others that have Aegean-style paintings. Artistic influences in Canaan usually came from the north, the area of present-day Iraq, not from the west.

“In archeology we refer frequently to a koiné—a Greek word meaning commonality. We’re wondering if there was some kind of artistic koiné, where people in the eastern Mediterranean were looking to the Aegean for influence, for whatever reason. We’re trying to figure out why,” Dr. Cline said.

The ingredients discovered in the wine jug samples provide further evidence of foreign influence, and further testing could determine more about the wine additives—giving more clues about the Canaan civilization.

For GW senior Jessica Nakano, digging up so many pieces of ancient history was “mind blowing.”

“It made me realize how much I love archaeology,” she said. “To find something this monumental on my very first dig—it really inspired me to keep going.”

What other secrets are hidden in the palace ruins? The excavation team will have to wait until 2015 to find out.

Just days before they finished digging, the 2013 excavation team discovered an entrance (or an exit) leading to another storage room, just to the south of the first chamber.

They did not have time to excavate, but they could see a lot more pottery in that room. The team also spotted another entrance leading to the west. Dr. Cline speculates that it leads to another storage room as well. “The question is, what is this other storage room? We don’t know if the jars have wine. They might hold olive oil. What if it’s something else?”

It might be a long wait, but in 2015, Dr. Cline will return to Tel Kabri with another team. And he is looking forward to expanding his wine collection.

“We’ll find the rest of them when we go back.”