Five of the Most Innovative Ideas from the 2016 Siemens Competition

High school students with a passion for math, science and technology presented their ideas at GW as part of the annual competition.
December 8, 2016 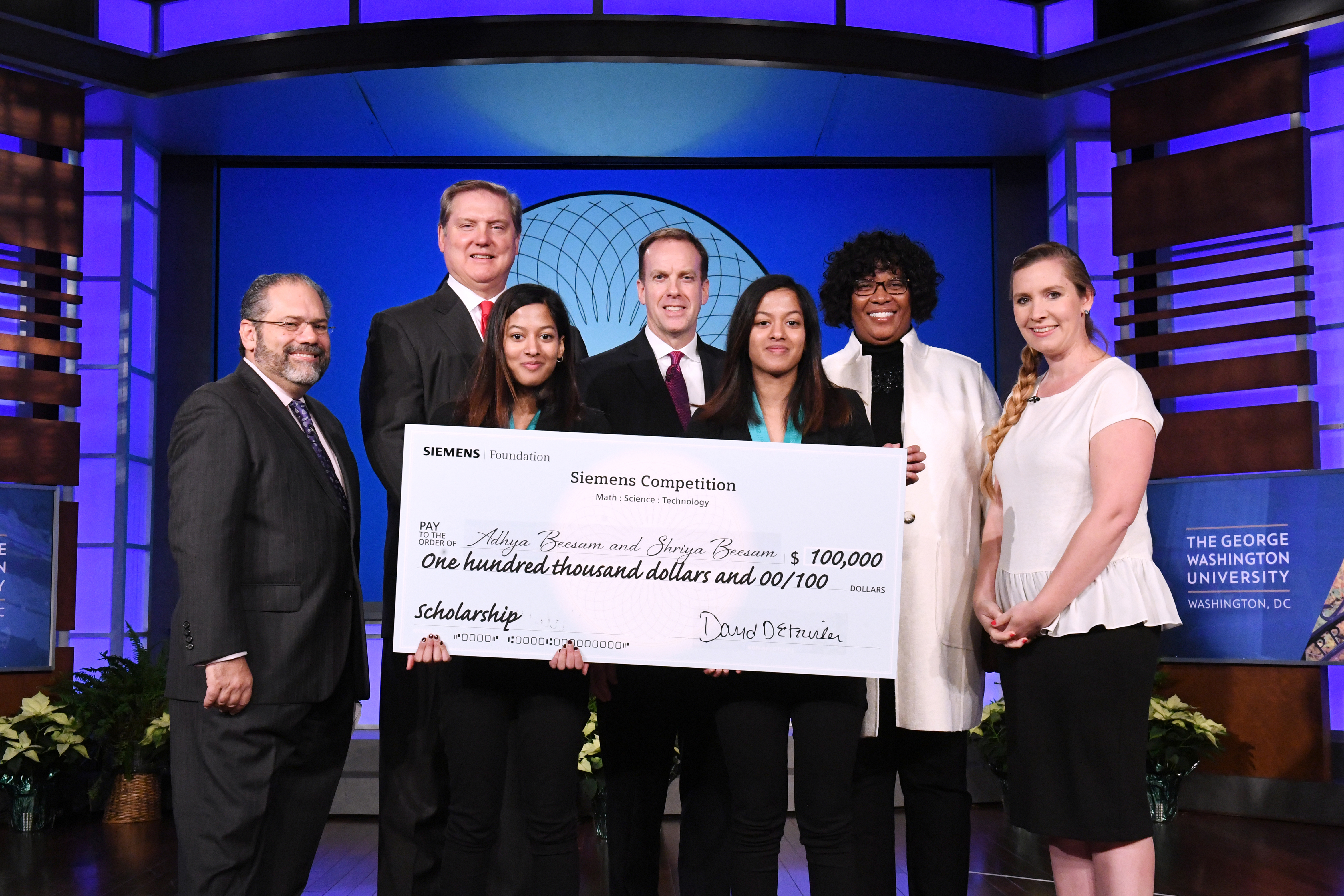 Sisters Adhya Beesam and Shriya Beesam from Plano, Texas, were awarded $100,000 in the 2016 Siemens Competition for their model on diagnosing schizophrenia based on patient MRI data and psychiatric assessments. (Photo: Siemens Foundation)

The next generation of mathematicians, scientists and innovators came to George Washington University this week as part of the 17th annual Siemens Competition as high school students from across the United States descended on Foggy Bottom to vie for $500,000 in college scholarships.

This year participants submitted more than 1,600 projects. Nineteen students from regional competitions were chosen for the final round at GW, which began Monday with six individuals and six teams of two to three students pitching their projects in Jack Morton Auditorium.

Finalists arrived on Friday before the competition and were provided with tours of the new Science and Engineering Hall. Engineering Professor Shahrokh Ahmadi led a "Research to Practice" panel discussion and hosted an open house for students. Siemens also held a SEAS open house for District of Columbia Public Schools students and local charter school students where they met the finalists to learn more about the projects and how they could apply in the future.

GW Today gathered a few ideas from some of the brightest future scientists, engineers and mathematicians in the country:

Diagnosing Schizophrenia
Juniors Adhya Beesam and Shriya Beesam, sisters at Plano East Senior High School in Plano, Texas, have developed a model to diagnose schizophrenia based on patient MRI data and psychiatric assessments. Oftentimes patients are diagnosed with schizophrenia after years of misdiagnosis, losing valuable treatment time. If patients can be diagnosed earlier, they will have faster access to better medical care and more success with long-term management, Ms. Shriya Beesam said. The Beesams were awarded the top $100,000 prize in the team competition.

Improving Biodegradable Batteries
Oregon Episcopal School senior Vineet Edupuganti developed a high-performing biodegradable battery that can dissolve after it’s been used. This technology can be used to power ingestible medical devices and environmental sensors. In testing, the Portland, Ore., student’s battery would dissolve roughly four days after it was discharged, and evidence shows its power can be scaled. Mr. Edupuganti was awarded the top $100,000 prize in the individual competition

Diagnosing Breast Cancer
Manan Shah, a senior from the Harker School in San Jose, Calif., has developed a computational model that uses tissue images of breast tumors to quickly and effectively assess the severity of tumor growth. This model could help doctors make faster diagnoses and better understand the growth of breast cancer on a molecular level. Mr. Shah’s method is a significant improvement over current tumor grading systems that are inefficient, expensive and labor intensive. Mr. Shah was awarded $50,000.

Unraveling Alzheimer’s
More than five million Americans suffer from Alzheimer’s Disease, and in less than 40 years that number is expected to increase by 40 percent. Little is known about how a person develops Alzheimer’s Disease, but Alexander Kirov, a senior at Greenbrier High School in Evans, Ga., believes he has pinpointed a molecular switch where the disease's progression can be interrupted to prevent neuronal damage. Mr. Kirov was awarded $40,000.

Sensing Toxic Metals
People living in rural villages have seen an uptick in mercury poisoning due to vapors from small-scale gold mining. Contact with mercury can lead to serious health complications including damage to the immune system, lungs, kidneys, skin and eyes. Prateek Kalakuntla has developed a low-cost sensor to detect small amounts of mercury in air, water and soil. The senior at Texas Academy of Math and Science in Denton, Texas, believes the low cost, easy-to-use sensor could help millions of people at risk of being poisoned by the toxic metal. Mr. Kalakuntla was awarded $30,000. 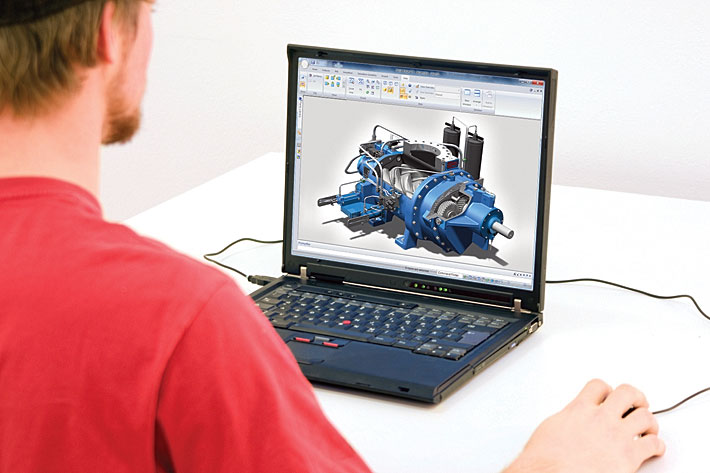 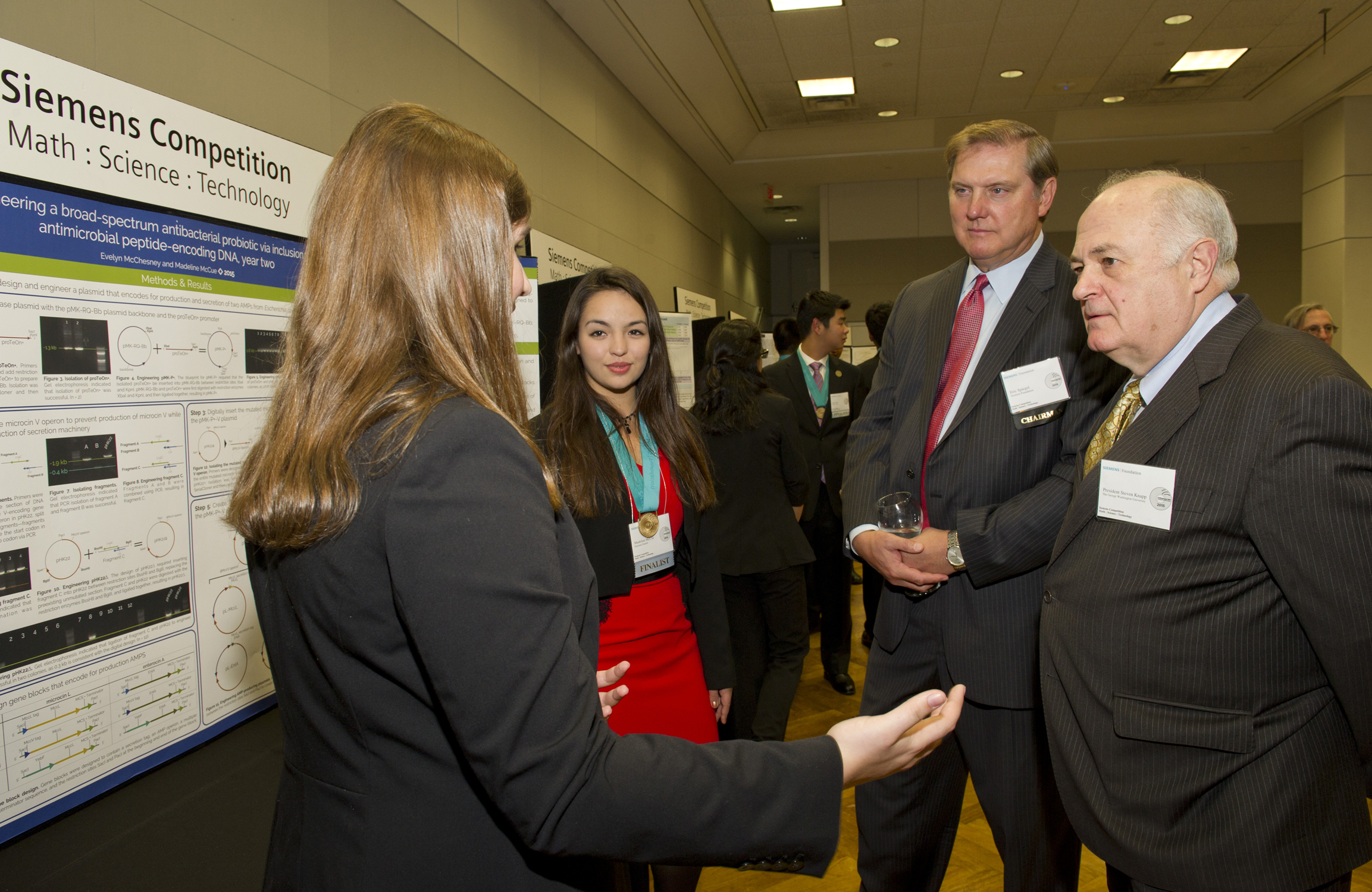 Six of the Coolest Ideas at the 2015 Siemens Competition Finals