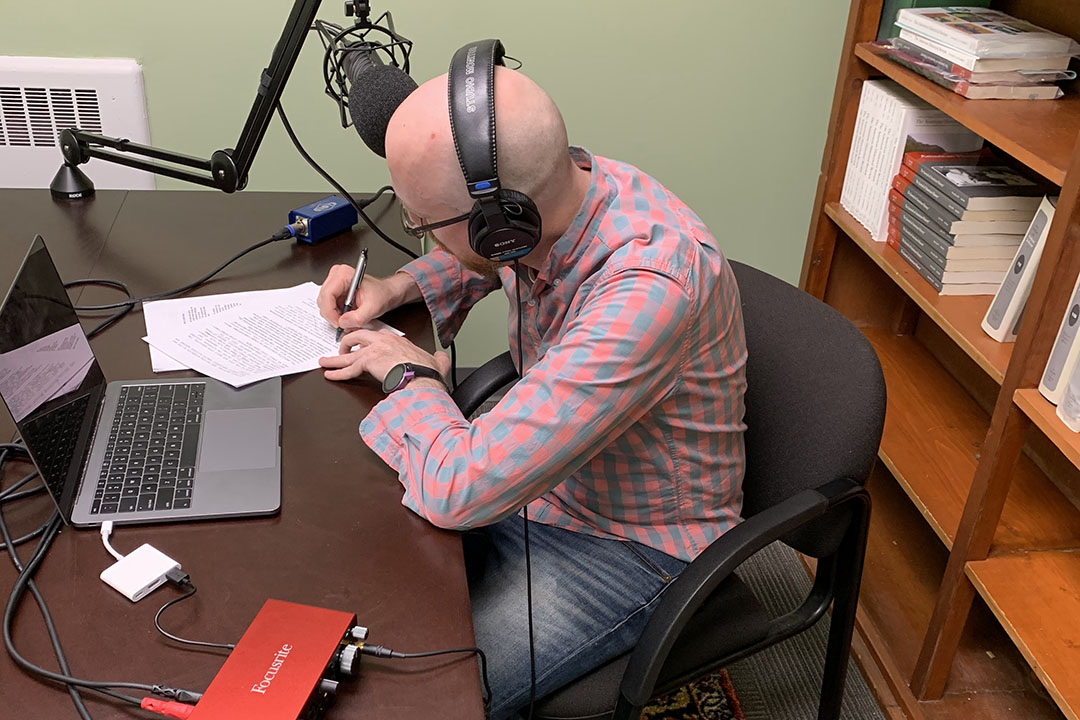 Historian Christopher Brick, B.A. ’02, records the Intervals podcast from his studio at the Eleanor Roosevelt Papers Project at the Mount Vernon campus.

For historians like Christopher Brick, B.A. ’02, director of the Columbian College of Arts and Sciences History Department’s Eleanor Roosevelt Papers Project, the past few years have been filled with frustration. Dr. Brick can barely turn on his TV—much less browse the internet—without hearing political figures, pop culture influencers and seemingly expert voices distort the historical record.

Just within the past few weeks, CNN pundit Rick Santorum dismissed Native American culture by proclaiming “there was nothing here” prior to the European conquest of the Americas. Recently, U.S. Rep. Marjorie Taylor Greene (R-Ga.) drew spurious comparisons between mask-wearing mandates and the horrors of the Holocaust. The History Channel has broadcast reports on crop circles and the Illuminati. And even pop-culture hits like The Da Vinci Code and Netflix’s The Crown have been criticized for inventing wildly inaccurate depictions of real people and events.

“The public often doesn’t understand that these things are fiction—they are not history,” Dr. Brick said.

And while an American tendency to believe in Area 51 alien myths may seem harmless, Dr. Brick warns that the consequences of our “historical illiteracy” can be dangerous to democracy. In a recent USA Today op-ed, he blames “America’s ongoing crisis” in humanities skills for producing the kind of conspiracy theories that fomented the Jan. 6 insurrection at the U.S. Capitol.

“These false narratives have been allowed to gain a foothold in the culture in part because we have not invested in historical literacy as a component of citizenship,” he said. “We just haven’t done a good job creating that skillset among Americans as a whole.”

But Dr. Brick and historians like him have a blueprint for raising our history IQ—one that emphasizes humanities funding, community projects and establishing more inclusive historical storytelling spaces. Dr. Brick is the host of the Organization of American Historians (OAH) podcast Intervals, a National Endowment for the Humanities (NEH)-supported public history initiative. Each episode features historians exploring the legacy of public health in America through the lens of issues like race and discrimination.

“We try to get professional, high-quality public history content into the hands of as many people as possible,” Dr. Brick said.

Meanwhile, he and his colleagues at the Eleanor Roosevelt Papers Project have used their  collection of the iconic first lady’s speeches and writings to highlight her role as a champion of human rights and racial justice. And Dr. Brick continues to advocate for measures like greater federal support of the humanities, investments in teacher training and opportunities for students to engage in researching community histories.

“Historical literacy is a public good worth funding—lavishly and generationally,” he said.

Not just the facts

To Dr. Brick, historical literacy goes beyond memorizing names and dates. “With the internet, everybody has almost universal access to the most obscure historical facts. You don’t need historians to teach you that,” he said.

Instead, he stressed, it is more important to develop critical thinking skills for discerning credible narratives from false ones. In his op-ed, Dr. Brick emphasized “the capacity to weigh evidence and evaluate arguments; to consider multiple viewpoints and sift them for accuracy; to credibly interpret current events in light of past ones; and to discern the chain of linkages that connect patterns over time.”

But those skills, he maintained, have been blunted by factors like hyper-partisan politics and online cultures that erode confidence in truthful information. Most disruptive, he said, has been a decades-long defunding of historical humanities. In 2020, NEH’s Congressional appropriation was $258 million less in inflation-adjusted dollars than in the late 1970s. Funding for the National Archives has frozen since 2014, despite a consortium of archival groups warning that shrinking budgets were the biggest threat to “an adequate documentary record of our democracy.” And in 2011, the Obama administration shelved the Teaching American History program that trained U.S. social studies teachers in historical literacy.

“For the cost of a rounding error in the federal budget, Congress could easily pair every school district in the United States with a team of specialists” for promoting historical literacy activities, Dr. Brick said.

Meanwhile, the Eleanor Roosevelt Papers Project is preparing to publish the third in a planned five-volume edition of documents from Roosevelt’s later political life, including her service as chair of the U.N. Human Rights Commission.

In 2013, the project was awarded a special designation by UNESCO as part of its historical heritage register. Currently, the collection includes 100,000 documents, 500 audio and visual recordings and 5,000 photographs, including all of her 8,000 My Day newspaper columns and rarities like her radio address to the nation just hours after the Pearl Harbor bombing. All of the material is publicly available—for historians, students or anyone who wants to sharpen their historical literacy skills, Dr. Brick said. “These records don’t just sit on a shelf. They are part of real public history work,” he said. “Historical literacy has always been in the DNA of this project.”