Eyes on the Prize: Student Stars in Soccer and Psychology

Whether in the lab or in the net, psychology major and soccer goalkeeper Justin Grady uses his study of visual cognition to see what others may miss.
August 8, 2022 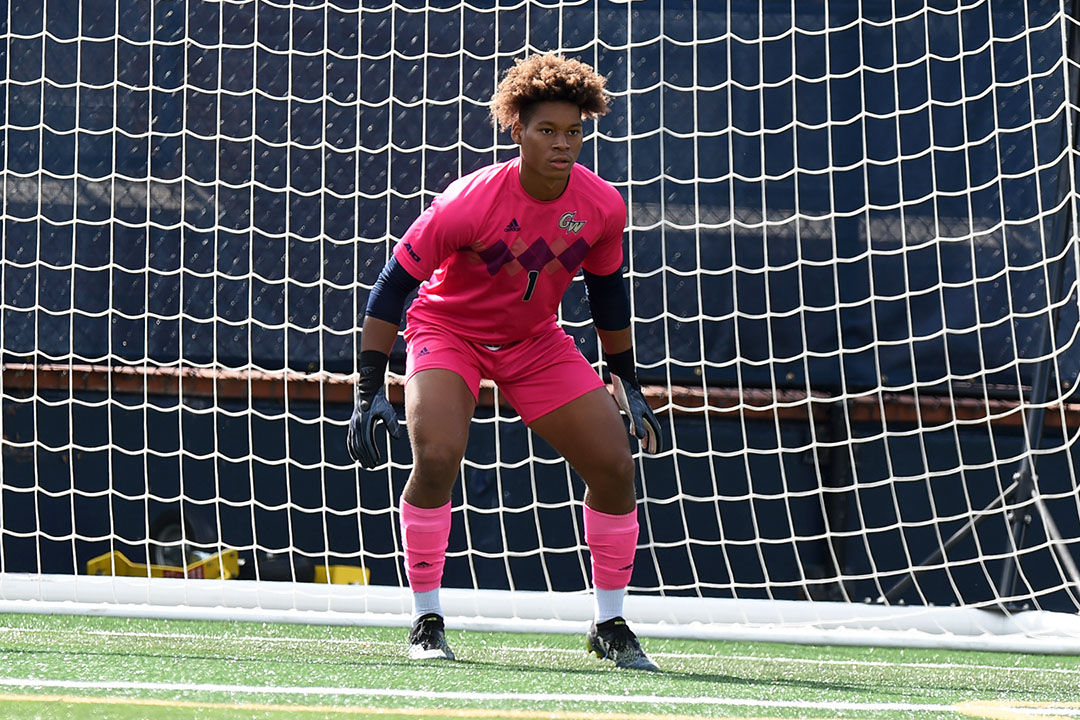 As the starting goalkeeper on the GW men’s soccer team, rising senior Justin Grady never takes his eyes off the field. He’s continually scanning the action, alert for shots from attacking opponents while positioning his teammates and directing strategy through hand signals.

And as a research assistant in Professor of Cognitive Neuroscience Stephen Mitroff’s Visual Cognition lab at the Columbian College of Arts and Sciences (CCAS), Grady, a psychology major, is testing how those same skills inform learning, attention and perception. His studies may have wide-ranging implications for professionals in fields like aviation security, medical imaging, the military and even sports.

“Being part of [Mitroff’s lab] has been a great opportunity to study something with tangible consequences,” Grady said. Mitroff “has been conducting work in the visual search field for a long time, and I’m happy I can make a contribution.”

Indeed, Grady’s line of research—specifically, whether more conscientious people are less susceptible to the effects of fatigue—has opened eyes in the lab and in the scientific community. He received a CCAS Luther Rice Undergraduate Research Fellowship and was recognized at the GW Research Showcase. He’s one of only two students nationwide selected for the Federation of Associations of Behavioral and Brain Sciences’ Undergraduate Research Excellence Award, which acknowledges undergraduates conducting “research of superior quality and with broader societal impact.”

And his first lead-authored paper, Conscientiousness Protects Visual Search Performance from the Impact of Fatigue, which he recently presented at the annual meeting of the Vision Sciences Society in St. Pete Beach, Fla., was published last month in the peer reviewed journal Cognitive Research: Principles and Implications.

“We are very excited about what Justin has accomplished. He is already conducting research at a very high level as an undergraduate,” Mitroff said. “We can’t wait to see what lies ahead for him.”

Mitroff’s lab employs data from the Airport Scanner mobile game, which simulates the search for prohibited items at an airport security checkpoint. Studying the cognitive performance of millions of users, Mitroff’s findings have been used to understand high pressure jobs such as pilots who must recognize which of several hundred switches to pull at the right moment and emergency room nurses who monitor floors full of patients. He has collaborated with organizations from the U.S. Army and the Department of Homeland Security to Nike, working with strobe-light eyewear that the sports apparel company designed to strengthen athletes’ vision.

Carving out a research niche within the lab, Grady’s work links conscientiousness—how detail-oriented people perform a task—to fatigue and visual search. Grady’s project, funded through a grant from the U.S. Army Research Lab, tracked the performance of hundreds of test subjects in the airport scanner game and compared it to the participants’ self-reported levels of energy and conscientiousness. His research concluded that more conscientious people are not as susceptible to the negative impacts of fatigue on search accuracy. 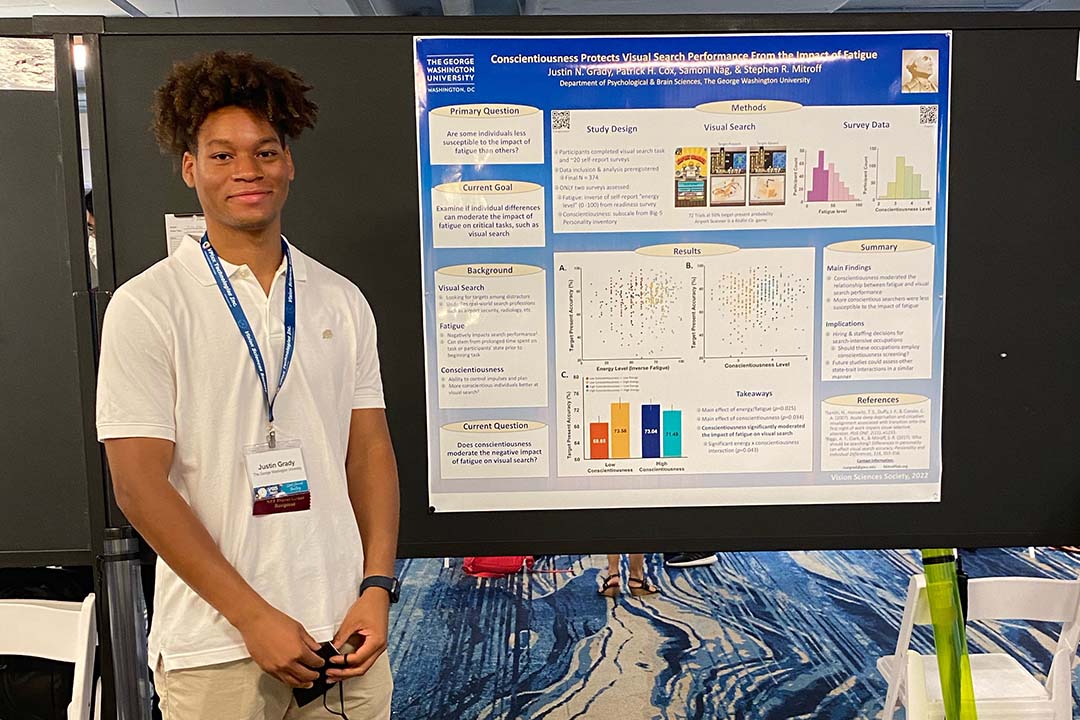 Grady joined the visual cognition lab in spring 2021 after taking Mitroff’s Cognitive Science in the District course, a popular first-year student seminar that includes field trips to the Transportation Security Administration headquarters at Reagan National Airport. Grady was struck by the relationship between cognitive psychology and real-world professions—including soccer. His paper—co-authored by Mitroff, CCAS postdoctoral researcher Patrick H. Cox and psychology Ph.D. candidate Samoni Nag—even cites a previous visual search study involving goalkeepers tracking opposing players. “As a goalkeeper, we focus in training on seeing all of the field at once,” he said. “The game is coming towards you, and you are relaying information to everybody on the field. You have to have your head on a swivel at all times.”

This summer, Grady is playing with the Philadelphia Ukrainian Nationals of the National Premier Soccer League and preparing to build on his psychology project in his senior year. Unlike other studies, Grady’s work found no evidence of a speed-accuracy tradeoff. He plans to further explore whether more conscientious participants maintain accuracy even when fatigued without sacrificing response time.

After graduation, Grady intends to pursue a Ph.D. in cognitive neuroscience and continue similar research—even once he hangs up his soccer cleats. “When I was younger I would have picked soccer over any other career—no brainer,” he laughed. “Now the prospect of spending time in the lab doing research sounds pretty good to me.” 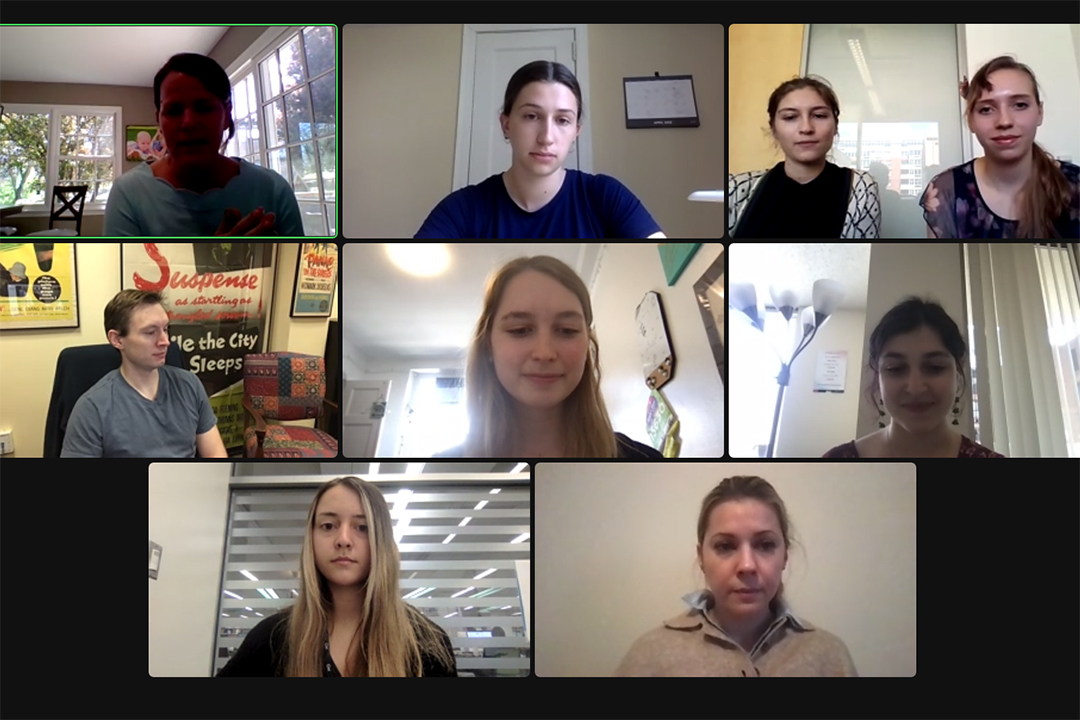 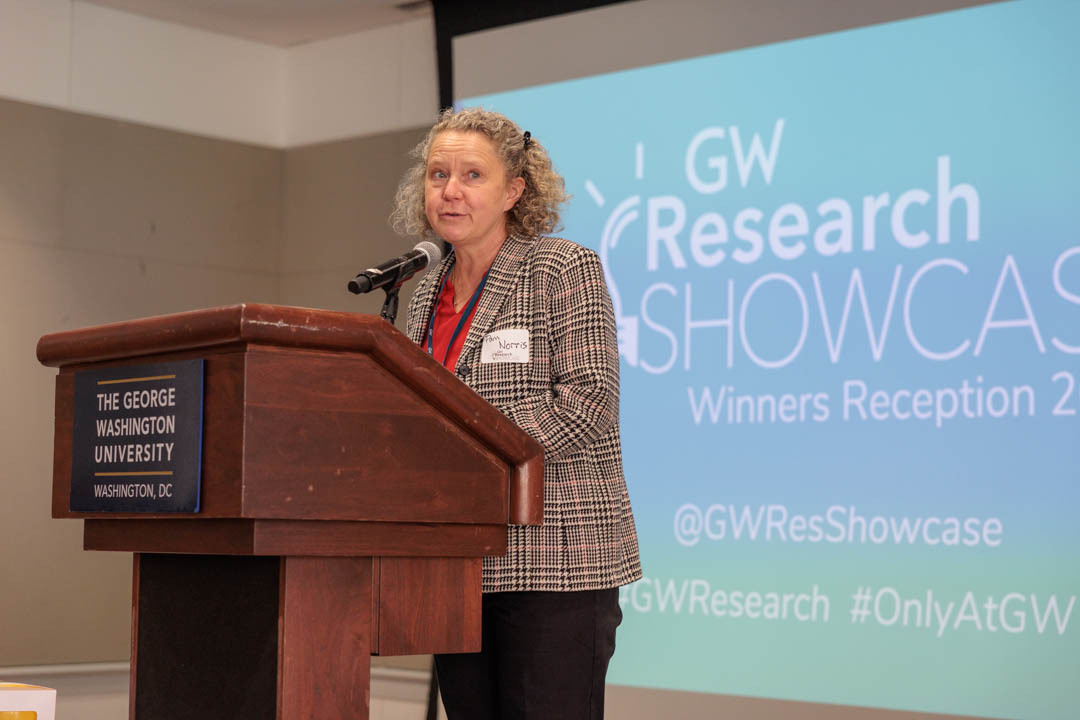