Hal Abelson speaks on the changing mission of libraries and the review he led of MIT's role in the case against Aaron Swartz.
November 18, 2013 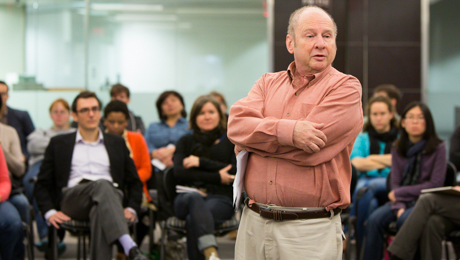 MIT Professor Hal Abelson discusses involvement in the case against Aaron Swartz at the Gelman Library.

Hal Abelson, a leader in free information and the Class of 1922 Professor of Computer Science and Engineering at the Massachusetts Institute of Technology (MIT), discussed the role of university libraries in the digital age at the George Washington University’s Estelle and Melvin Gelman Library on Friday.

"Dr. Abelson is at ground zero of every major initiative of open access,” said GW Libraries Director of Scholarly Technology Daniel Chudnov, welcoming the audience of staff, faculty and students.

Dr. Abelson is known for his work as the founder of Creative Commons, a nonprofit that facilitates shared content through standard copyright licenses. He has been lauded for his groundbreaking research in computation and education.

He began the discussion with an acknowledgement of the changing mission of university libraries and the services they offer.

In the last 10 years the shift toward the digital age has redefined the role of university libraries as gateways for access to information, rather than holding cells of information, he said.

Access to information is largely connected to the availability of digital resources, he added before asking for a moment of silence to honor a pioneer in digital library research, Anne Wolpert, the former director of libraries at MIT who died last month.

“In the digital world, [university libraries] are a central and critical part of the university mission,” he added.

Most recently, Dr. Abelson led a team that performed an internal evaluation of policies at MIT per a charge from MIT President L. Rafael Reif.

The 182-page report was commissioned following the controversial case against Aaron Swartz, a “hacktivist” who later committed suicide after being charged with violating the Computer Fraud and Abuse Act.

Using the open network at MIT, which has no firewalls or network filter restrictions, Mr. Swartz, who was not a student, illegally downloaded 5 million scholarly articles from the popular digital library JSTOR, which was roughly 80 percent of JSTOR’s archive.

“Our charge was not to be any kind of judge, but to provide an objective and thorough account of what happened and to suggest how MIT might learn from this tragedy,” Dr. Abelson said.

“Libraries are the link between the informational world and the university,” he said.

“This presentation will provoke deeper discussion about our university ethics and our policies around technology,” Ms. Henry said.