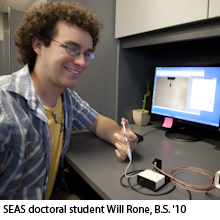 Proposed new science and engineering complex to be considered Friday by the Board of Trustees.

With the Board of Trustees set to consider on Friday the proposal for a new science and engineering complex, the Faculty Senate engaged in a lively debate on Oct. 8, resulting in a resolution requesting frequent reports as the project moves forward.

Among those advocating for the project during the Faculty Senate meeting was Charles Garris, an engineering professor. Dr. Garris spoke about the limited space available to faculty conducting research and the benefits the science and engineering complex would bring to GW.

The eight-story building would nearly double the amount of space currently available at GW for science and engineering. The complex would include approximately 400,000 square feet above grade and yield 290,000 square feet of assignable space for teaching and research laboratories for faculty and students in GW’s Columbian College of Arts and Sciences and the School of Engineering and Applied Science.

For current GW students, the most exciting prospect is having more space devoted to research.

“We’re doing cutting-edge research in a 50-year-old building,” says Will Rone, a SEAS doctoral student studying mechanical engineering. “If we can do what we’re doing now with these facilities, I can only imagine what we’re going to do with brand new state-of-the-art facilities designed by some of the best architects in the country.”

During the summer before his senior year, Mr. Rone, B.S. ’10, got the opportunity to work on a research project with Pinhas Ben-Tzvi, director of GW’s Robotics and Mechatronics Lab and an engineering professor.

Mr. Rone, of Gulf Breeze, Fla., studied microfluidics – the precise control and manipulation of fluids – through the use of droplet generation, which is used to conduct many types of medical research. He also had a paper on microfluidics published in February in the journal, Microsystem Technologies.

“The chance to have a summer job that was directly related to my major was an amazing opportunity,” says Mr. Rone, who was able to be funded that summer through a research grant. “Not every undergraduate student has that opportunity, but I think more should.”

Mr. Rone hopes that with the prospect of getting more research space, undergraduate students will have the option of receiving credit for conducting research.

In addition to faculty input, students like Mr. Rone have been a key part of planning for the proposed new science and engineering complex.

“Tompkins Hall isn’t a perfect building. We see Duques Hall and the Elliott School of International Affairs, and we have dreams of having breakout rooms of our own one day,” says Mr. Rone. “We’ve really grown out of the space we have.”

Because of space restrictions, most engineering classes are held in Staughton Hall. Offices are found in the Academic Center and 2020 K Street, and a few research labs are at the Virginia Science and Technology Campus.

A typical floor in the proposed new complex would include research and teaching areas as well as breakout spaces. The School of Medicine and Health Sciences and research collaborators throughout the university would also be involved in research in the building.

Ashely Kowalski, a GW senior studying aerospace engineering, thinks if the proposed complex became a reality, GW would become better known in the fields of science and engineering.

“We’d start to be known as a top research university, which I think every university strives for,” says Ms. Kowalski, president of the student Engineers Council. “If we have a bigger and better building, we’re going to have a lot more people wanting to invest into it. Alumni looking back at Tompkins, they see nothing has really changed. The equipment is really the same, and no one really wants to give money to that. But if they see new labs and new equipment, we’ll get alumni and companies wanting to invest in GW.”

Return to the GW Today homepage.