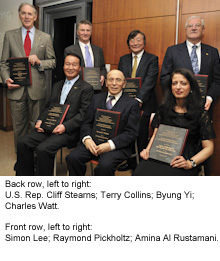 A sitting congressman, an executive at Boeing and a beloved professor emeritus were among seven people inducted Tuesday night into the GW Engineering Hall of Fame.

The honor, bestowed by the School of Engineering and Applied Science, began in 2006 and now has been given to 28 alumni, faculty, staff and friends of SEAS.

The honorees to-date “are individuals who bring distinction to GW with their achievements and their contributions to their professions, the university and society at-large,” SEAS Dean David Dolling said at the awards ceremony.

“By honoring the achievements of these seven individuals,” he said, “we help build the school history that future classes of students inherit and will be challenged by and will actually be used as a calibration, as a measure of their own success.”

U.S. Rep. Cliff Stearns (R-Fla.), who earned a bachelor’s in electrical engineering from GW in 1963, said his father received both a bachelor’s and a master’s from the university, and he felt “a huge responsibility to go to GW, which I was very happy to do.”

The curriculum, he said, was “a little too hard for me,” but it is where the Florida Republican caught a glimpse of the future when he won election to the student government.

“Thank you very much,” he said, “for this very special honor.”

It was an especially satisfying night for Raymond Pickholtz, a professor emeritus of electrical engineering, who joined the faculty in 1972 and was being inducted into the hall of fame alongside two former students: Amina Al Rustamani, B.S. ’93, M.S. ’96, D.Sc. ’01, who is the chief executive officer of TECOM Business Parks, part of Dubai-based TECOM Investments; and Byung Yi, D.Sc. ’99, senior executive vice president at LG Electronics and president of the LG Mobile Research Center.

Dr. Pickholtz said he was “proud of the students who have achieved so much,” particularly those with whom he was sharing the spotlight Tuesday night.

“In fact, I always thought that the greatest achievement is when your own students exceed your own accomplishments,” he said. “I’m very proud of them.”

In introducing Dr. Pickholtz, Dean Dolling said the professor had become highly regarded for his research—he holds six U.S. patents and has authored or co-authored hundreds of scholarly papers—as well as for his mentorship.

Dean Dolling quoted Ya-Qin Zhang, D.Sc. ’90, who is a corporate vice president at Microsoft and chairman of Microsoft Asia-Pacific Research and Development Group, as saying: “To me, Ray symbolizes wisdom, confidence and excellence. He was the reason why I studied at GW. He is the inspiration for my career. He is a teacher, coach, a mentor, a friend and a father figure. He is my hero.”

The other inductees were:

—Terry Collins, D.Sc. ’76, co-founder of the defense contracting firm Argon Engineering Associates Inc. In a merger, the company later became Argon ST, and this year was purchased by Boeing, with Dr. Collins continuing to manage the business.

—Simon Lee, M.S. ’05, who is the founder, president and chief executive officer of STG Inc., one of the largest federal contractors in the region. Education at GW was something of a family affair for him: When Mr. Lee received his master’s, he graduated alongside three of his children. And earlier this year, Mr. Lee and his wife, Anna, gave a $1 million gift to SEAS to fund a student exchange program with his other alma mater, Korea University in Seoul, South Korea. On Tuesday night, Dean Dolling said plans are being finalized for the first group of 10 GW students to participate in the travel program this spring.

—Charles Watt, M.S. ’73, D.Sc. ’86, who is the founder and chairman of Scientific Research Corporation. He also is a faculty member at Clemson University and serves as a board member or consultant for several advanced technology organizations.