Emmanuel Macron: ‘You Will Be the One to Decide’

The president of the Republic of France encouraged GW students to look to the future and challenge the traditional rules of how things get done in politics.
April 26, 2018 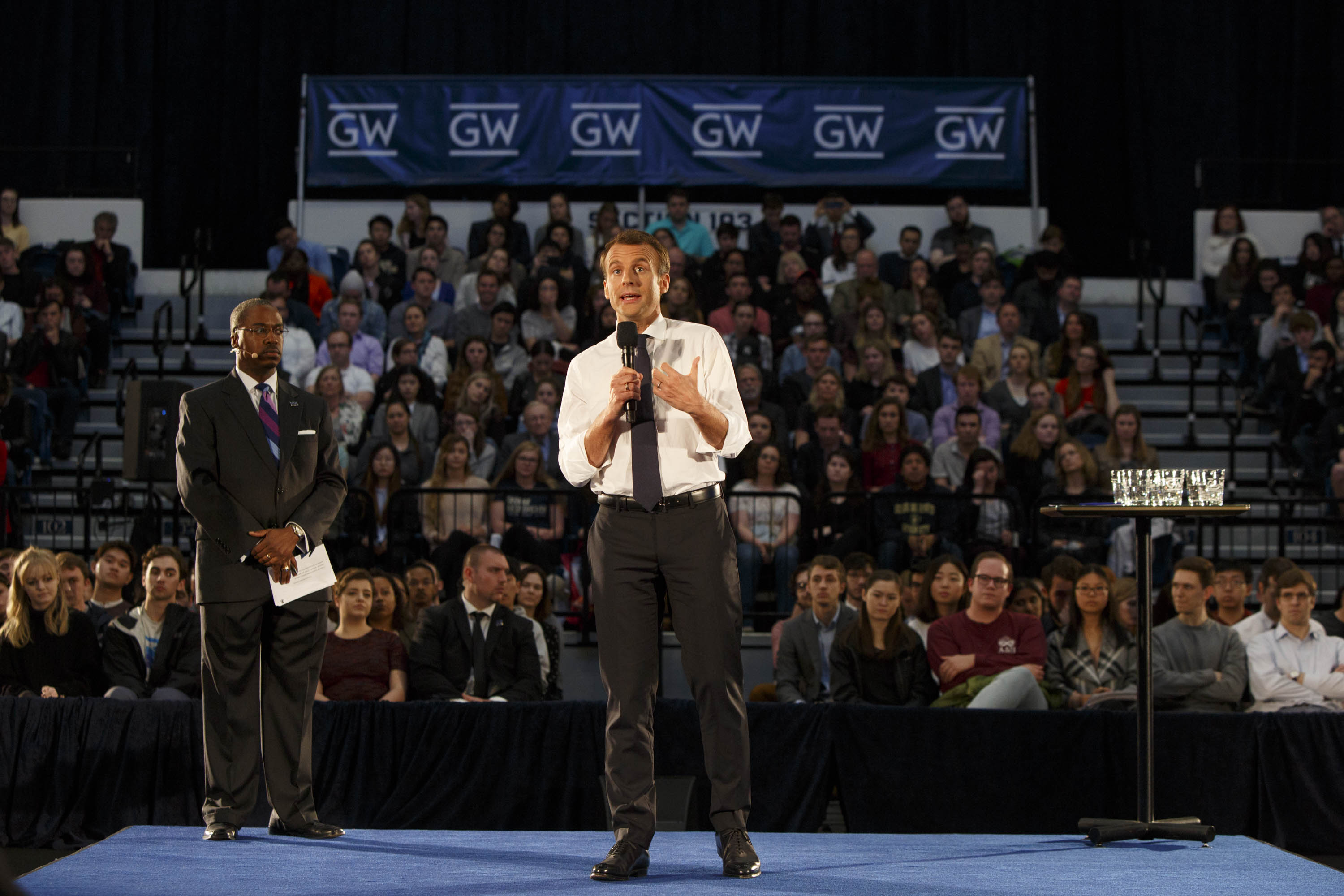 President of the Republic of France Emmanuel Macron participated in a town hall event at GW on Wednesday. The Q & A session was moderated by Reuben E. Brigety II (left), dean of the Elliott School of International Affairs. (Logan Werlinger/ GW Today)

President of the Republic of France Emmanuel Macron encouraged George Washington University students frustrated with the American political system to challenge the status quo and form their own rules. Just like his successful presidential run, he said, everything is impossible until it isn’t.

“Your generation is the one to decide for itself,” he said. “You are here to listen to your teachers, but tomorrow, and even now, you are also here to take your own responsibilities.”

Mr. Macron spoke to more than 1,000 GW students on Wednesday as part of a town hall event at the Charles E. Smith Center. He took questions from the audience on a range of issues from his country’s involvement in Syria, anti-Semitism, mass migration, the European Union and President Donald Trump’s budding trade war with China.

Mr. Macron stopped to talk with scores of students who filled in around him as he made his way across the Foggy Bottom Campus, answering individual questions, shaking hands and signing autographs before and after the town hall.

“We will try to do our best to provide some answers, but at the end of the day you will be the one to decide,” Mr. Macron said.

Mr. Macron was elected in May 2017, defeating right-wing candidate Marine Le Pen to become the youngest president in French history. He came to Washington, D.C., for the first state visit hosted by Mr. Trump. Mr. Macron spoke at GW following the Tuesday evening state dinner at the White House and a Wednesday address to a joint session of Congress. After the town hall, Mr. Macron held an on-the-record press conference with dozens of journalists in the Marvin Center.

The Q & A session was moderated by Reuben E. Brigety II, dean of the Elliott School of International Affairs. GW President Thomas LeBlanc introduced Mr. Macron, saying that institutions such as GW play a critical role in hosting debate and thoughtful discourse on events of the day. More than 25 French students attend GW, and many of them were present for the town hall.

“This is truly an ‘Only at GW’ moment,” Dr. LeBlanc said.

When asked about France’s involvement in Syria, Mr. Macron said he wants to focus on defeating ISIS, then promoting peace and a more inclusive state that welcomes minority voices and allows all people to vote. Earlier this month, France, the United States and Britain launched airstrikes to punish Syrian President Bashar al-Assad for a suspected chemical attack against his own people.

Mr. Macron said he wants to preserve international rule of law in Syria and does not want to get drawn into a war.

“We should never forget that the one to decide for their own future are the Syrians,” he said.

Some students protested France and the United States’ involvement in Syria and held anti-war signs with sayings like “No U.S. war on Syria” outside the Smith Center as Mr. Macron entered and left the building.

Mr. Macron also acknowledged anti-Semitism in France, and said it’s important for people to “name it and recognize it.” The country needs to improve education, provide greater security for the Jewish community and make it clear that the French identity is made up of an array of religious beliefs, he said.

“We have to protect our Jewish people and to reaffirm every day that they are part of the French republic,” he said.

Mr. Macron said he pushed back against the idea of a trade war between the United States and China during his meetings with Mr. Trump. Mr. Trump enacted tariffs on Chinese steel and aluminum imports earlier this year, and President Xi Jinping responded in kind. China’s industrial overcapacity is an issue, Mr. Macron said, but it can’t be solved through an escalating trade war.

Mr. Macron ate lunch at nearby Tonic with civil rights leader Rep. John Lewis (D-Ga.) before the town hall. On his way out of the restaurant, he shook hands and posed for selfies with students who gathered on the sidewalk as news of Mr. Macron’s Foggy Bottom lunch spread.

Freshman Paul Vernick, who is majoring in international business, was one student who waited outside Tonic to catch a glimpse of the world leader. Mr. Vernick wrote a question out on a notepad asking Mr. Macron about Antoine Griezmann, his favorite French soccer player, and got him to sign it.

Following the town hall, Mr. Macron went to the Marvin Center where he met with French and U.S. media for a press conference. The university held a week of France-themed events this week to commemorate Mr. Macron’s visit the Foggy Bottom. 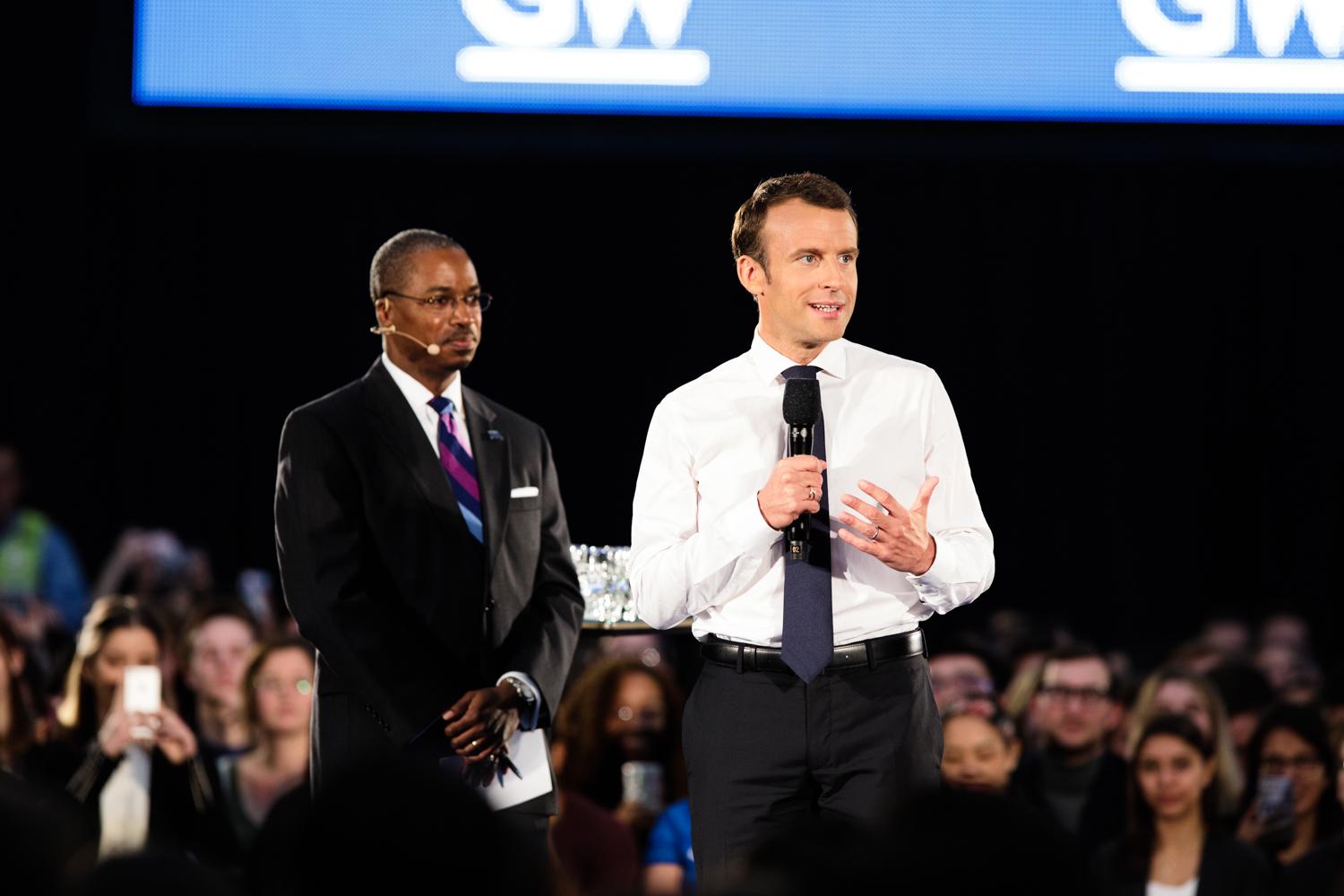 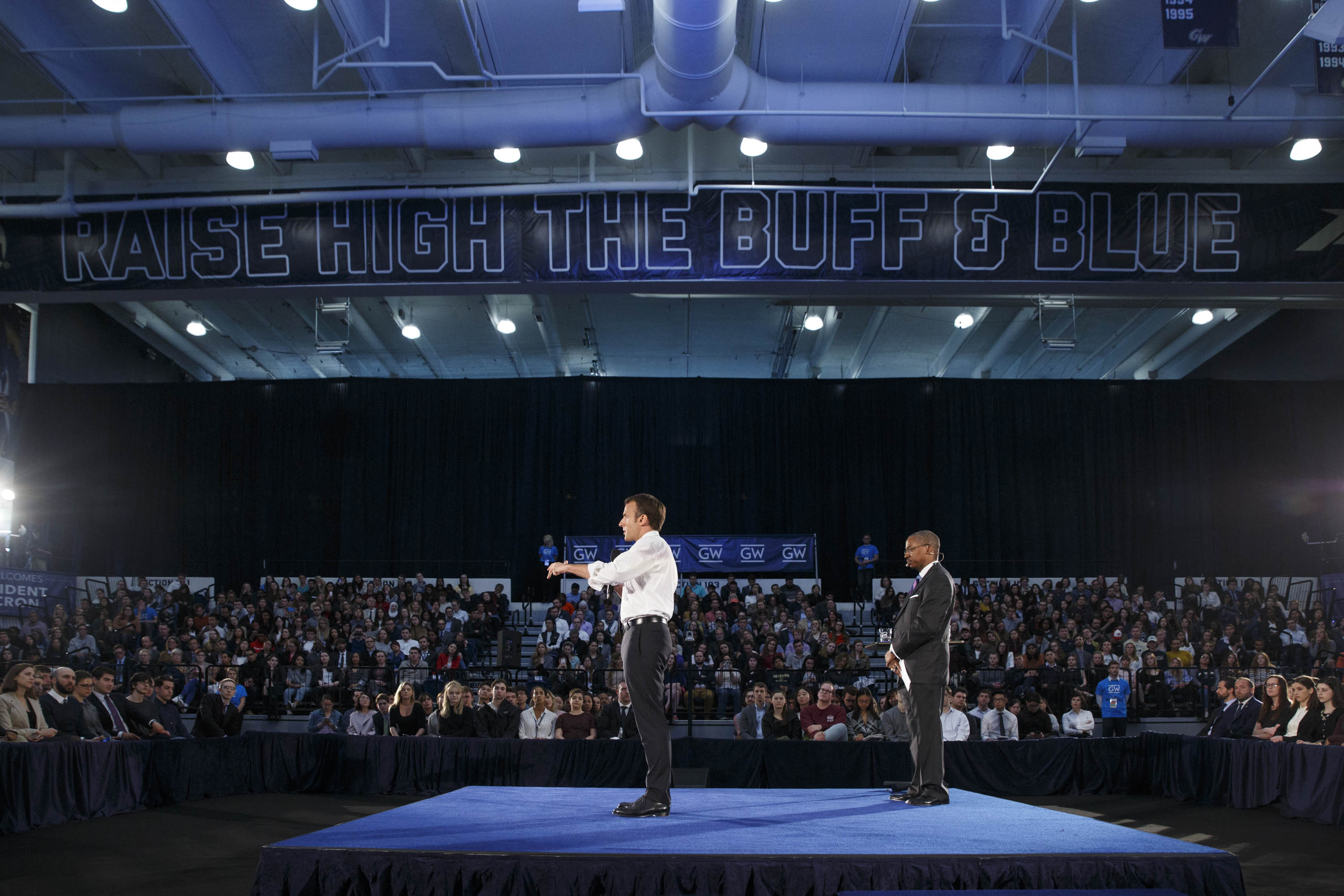 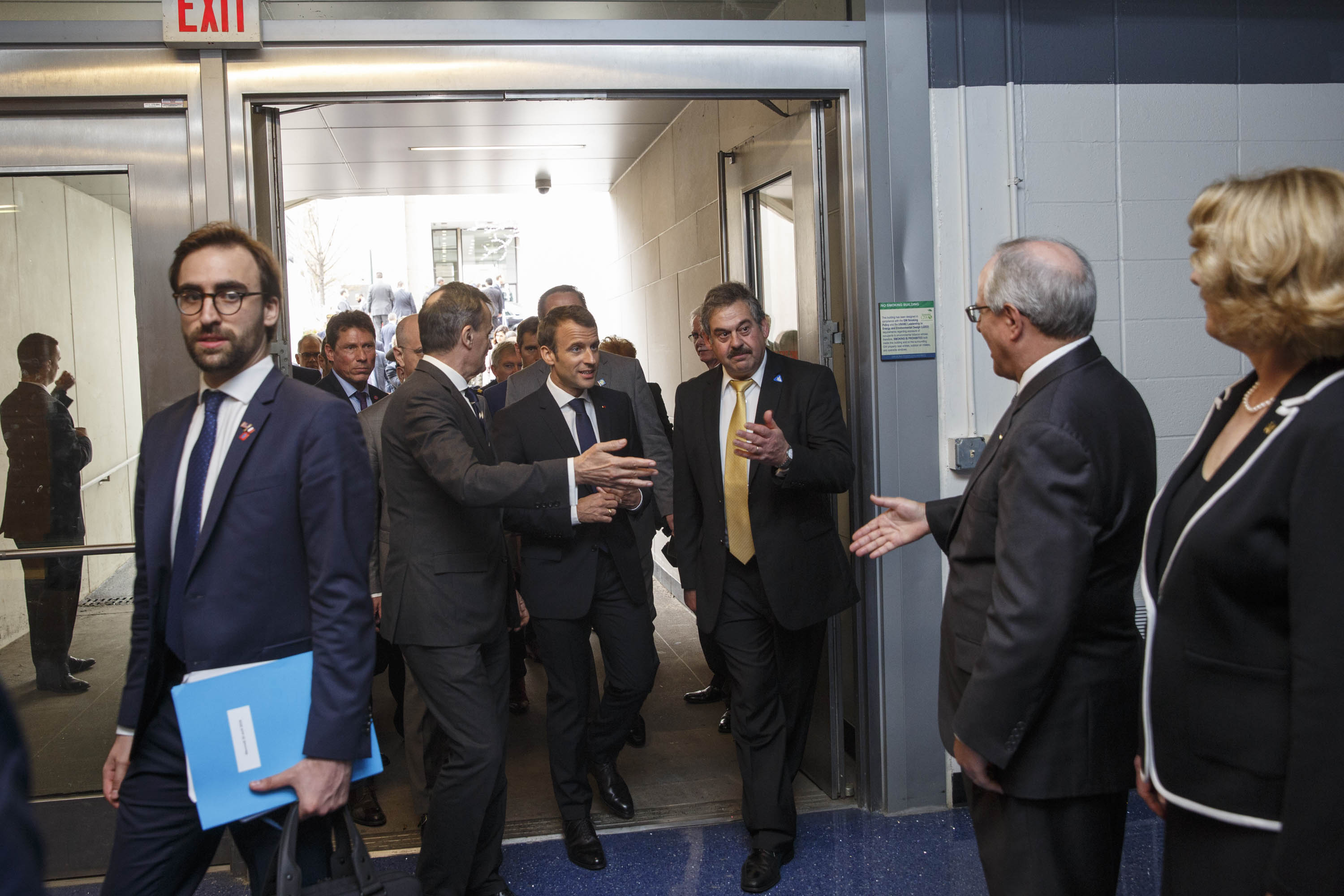 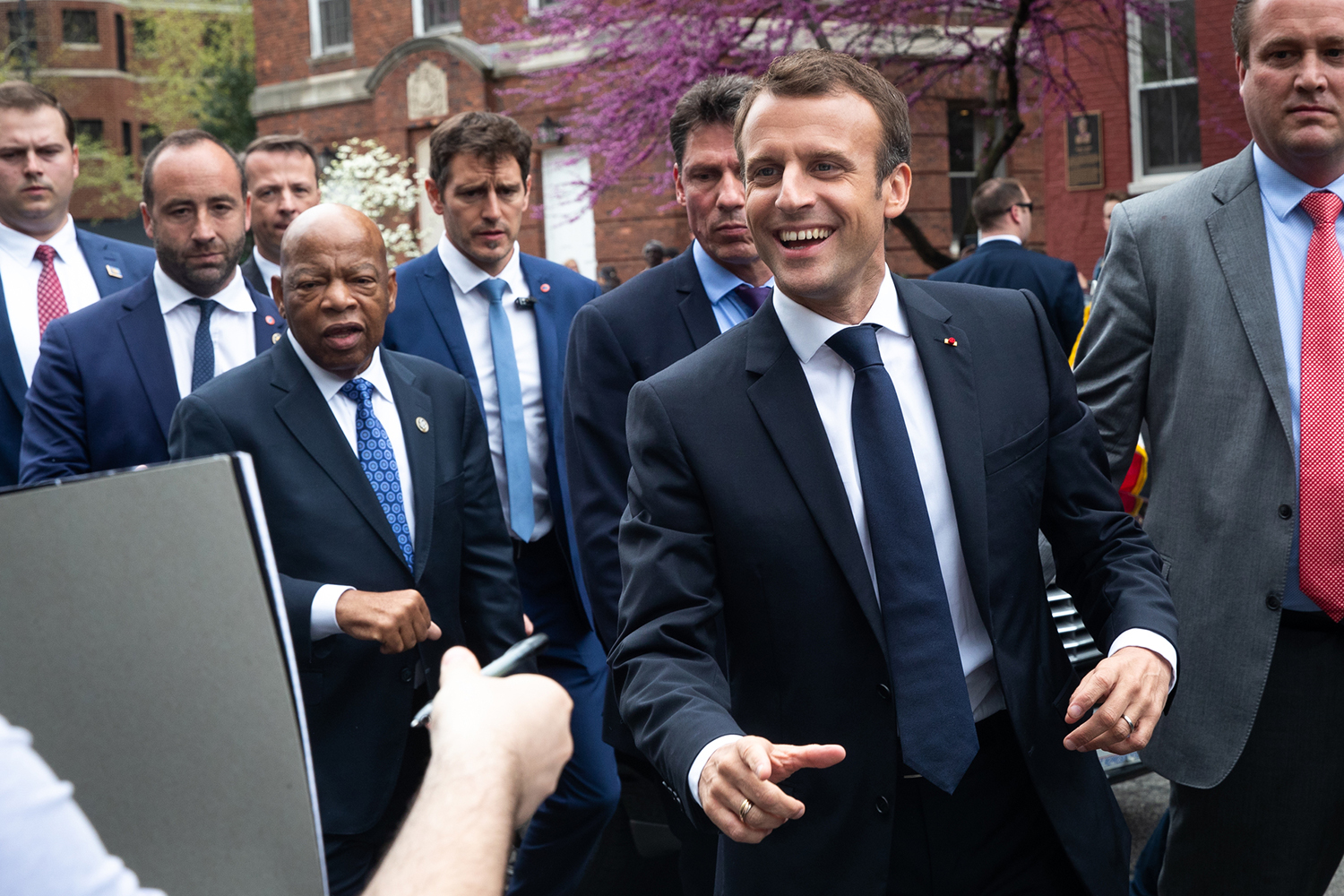 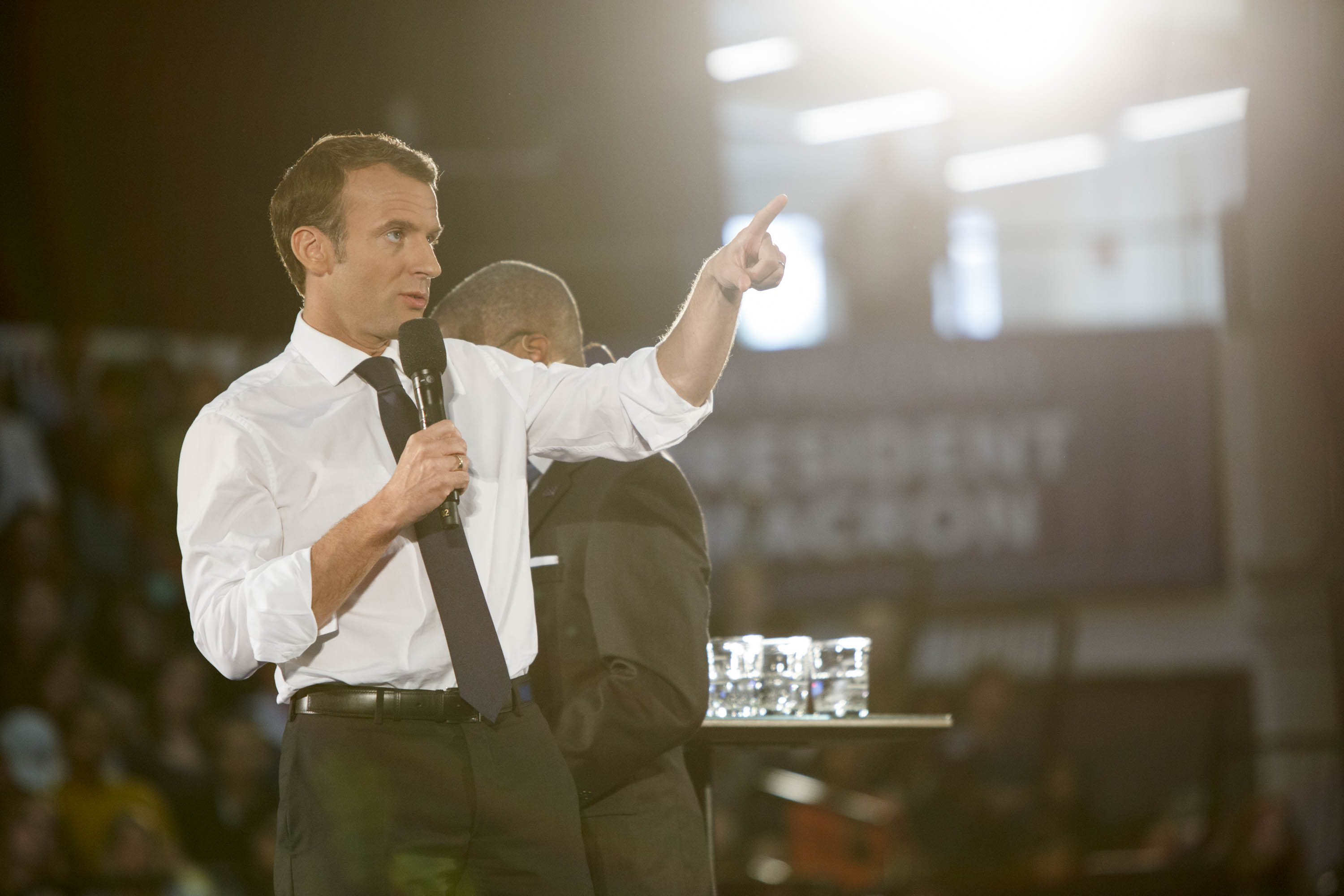 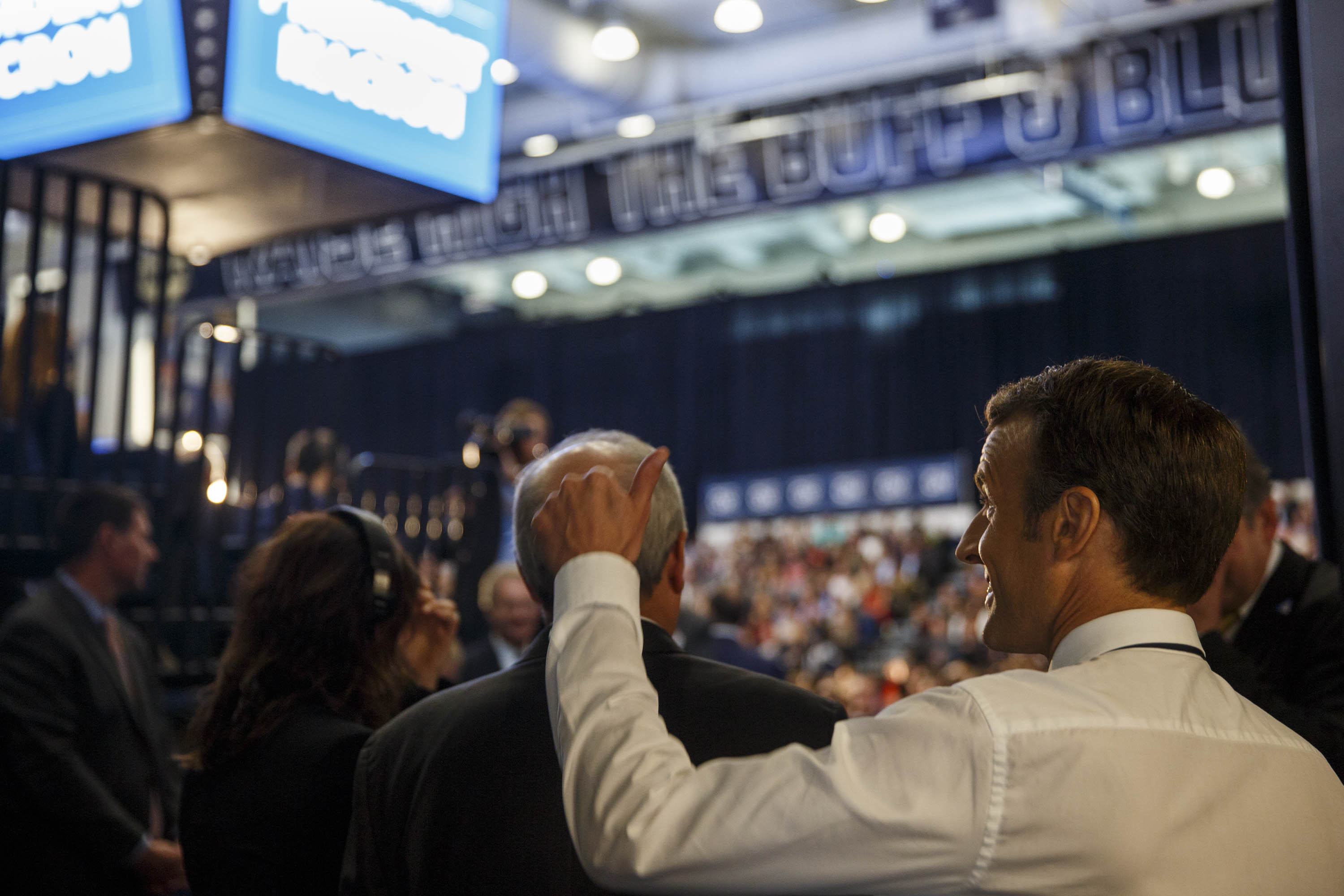 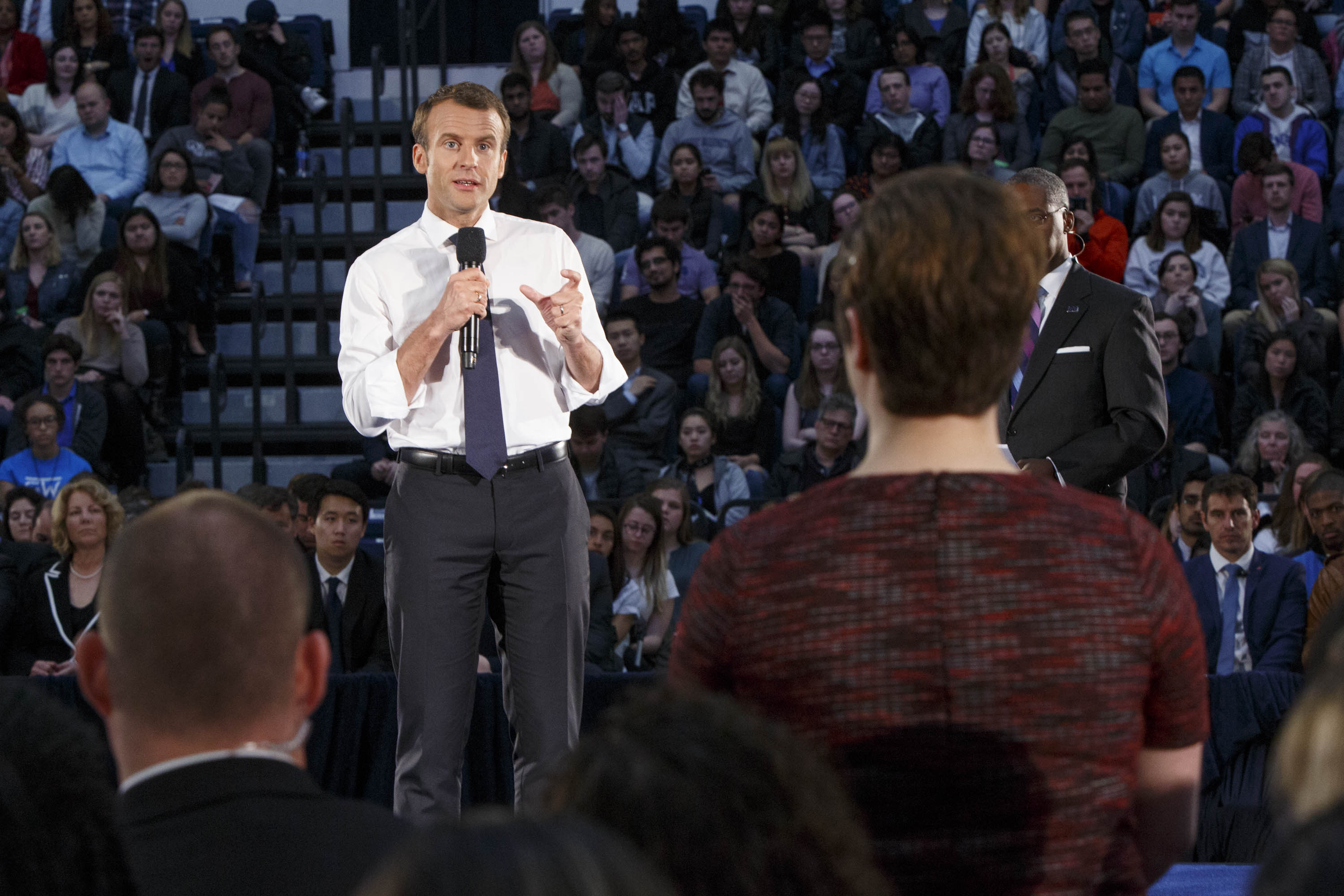 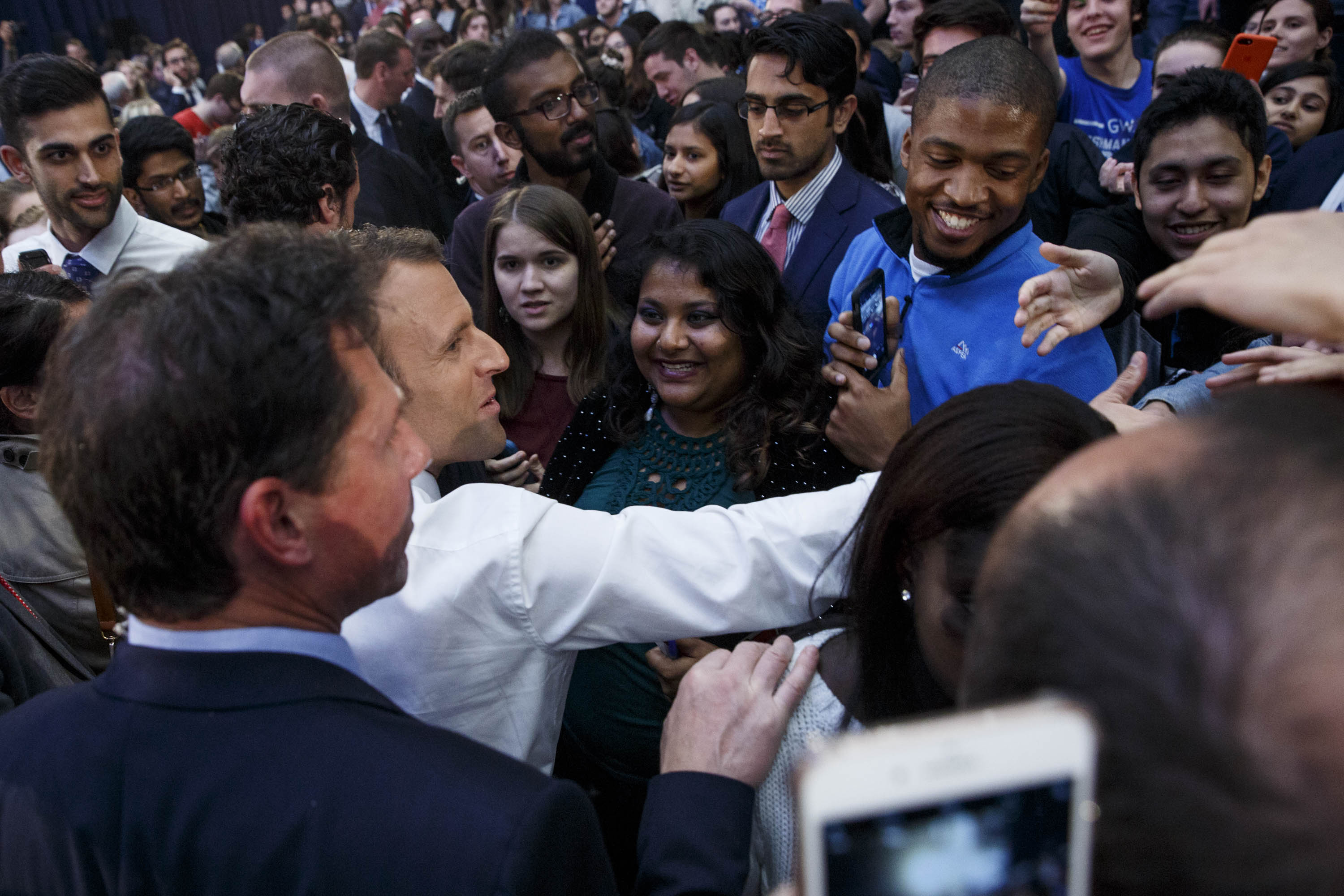 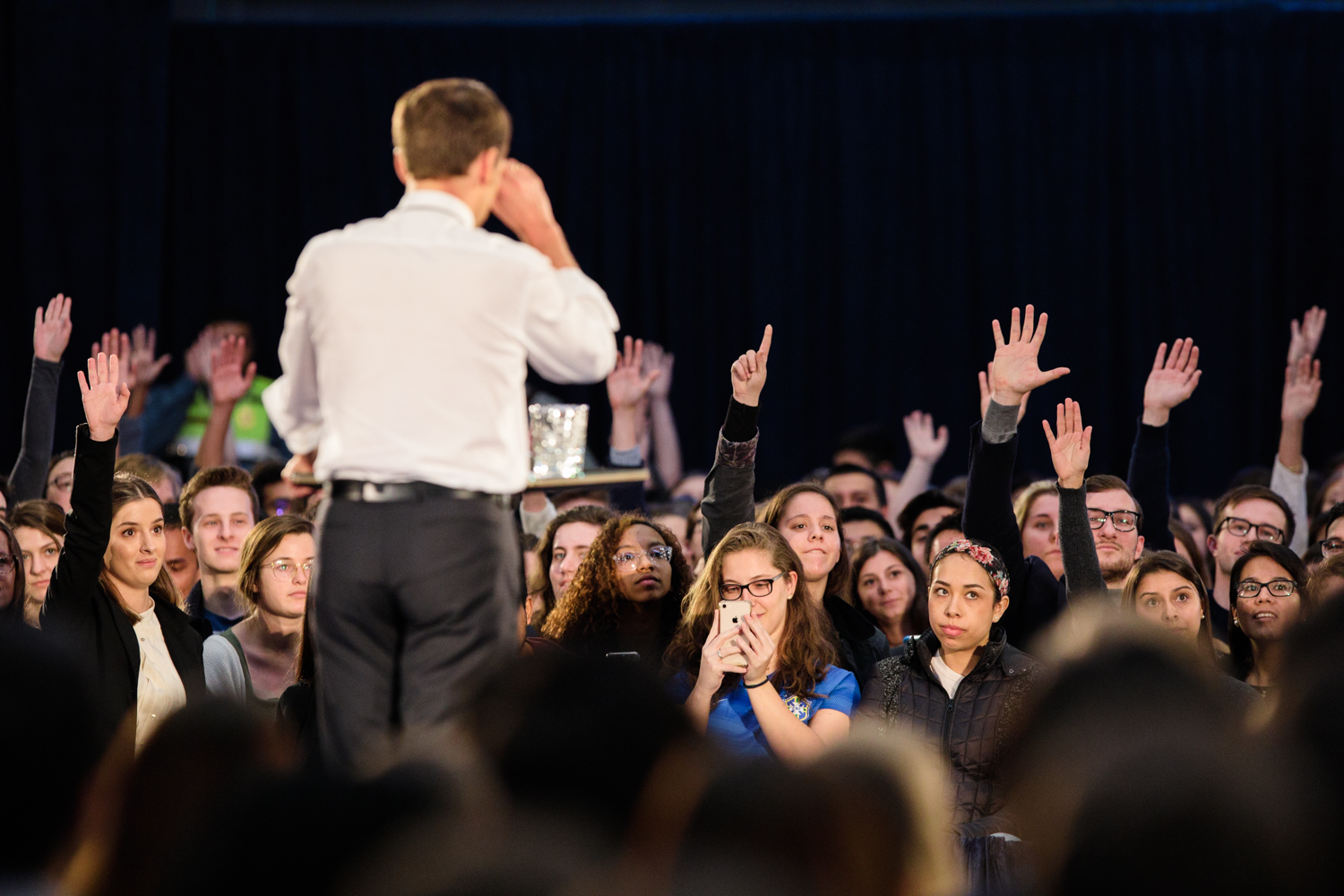 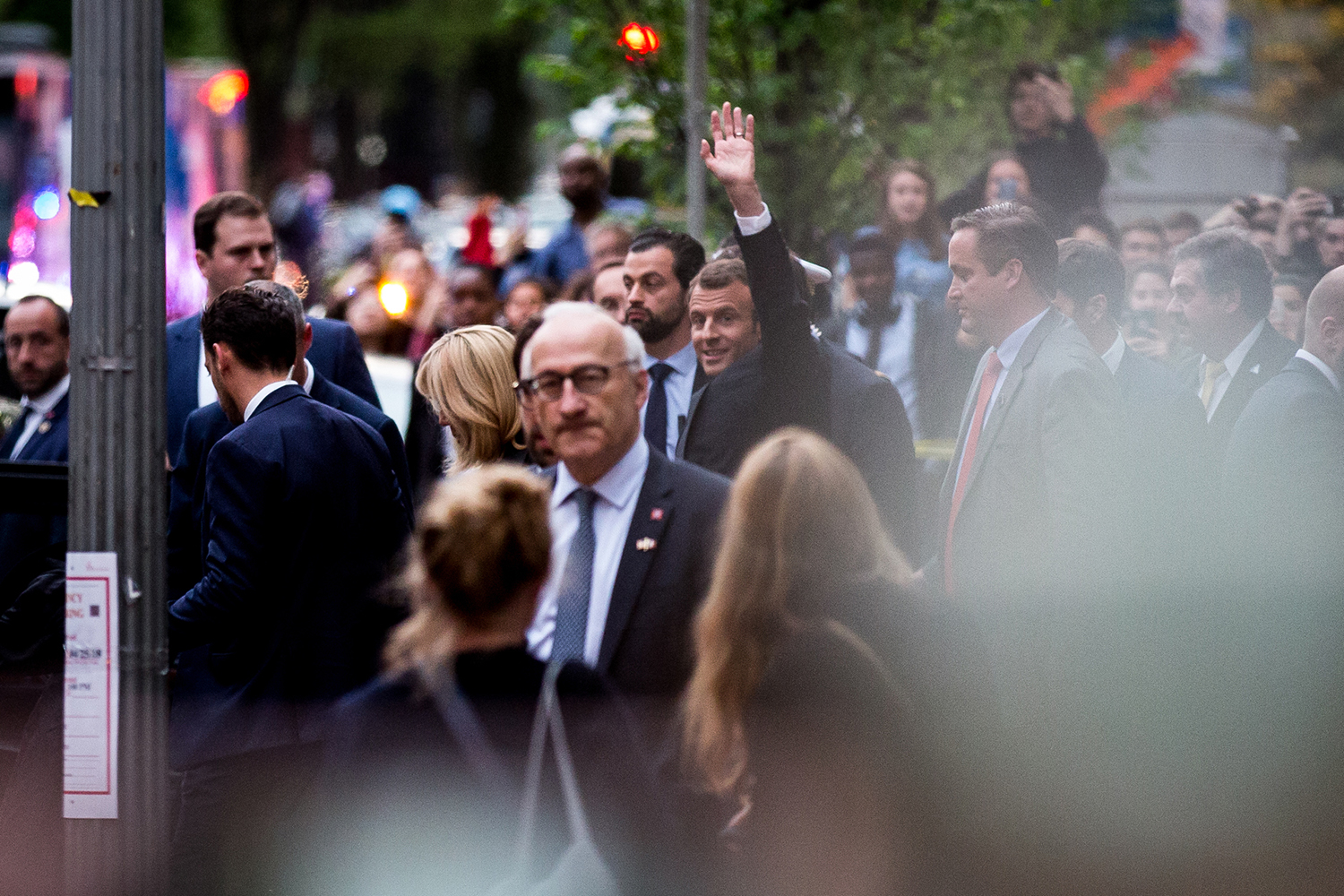 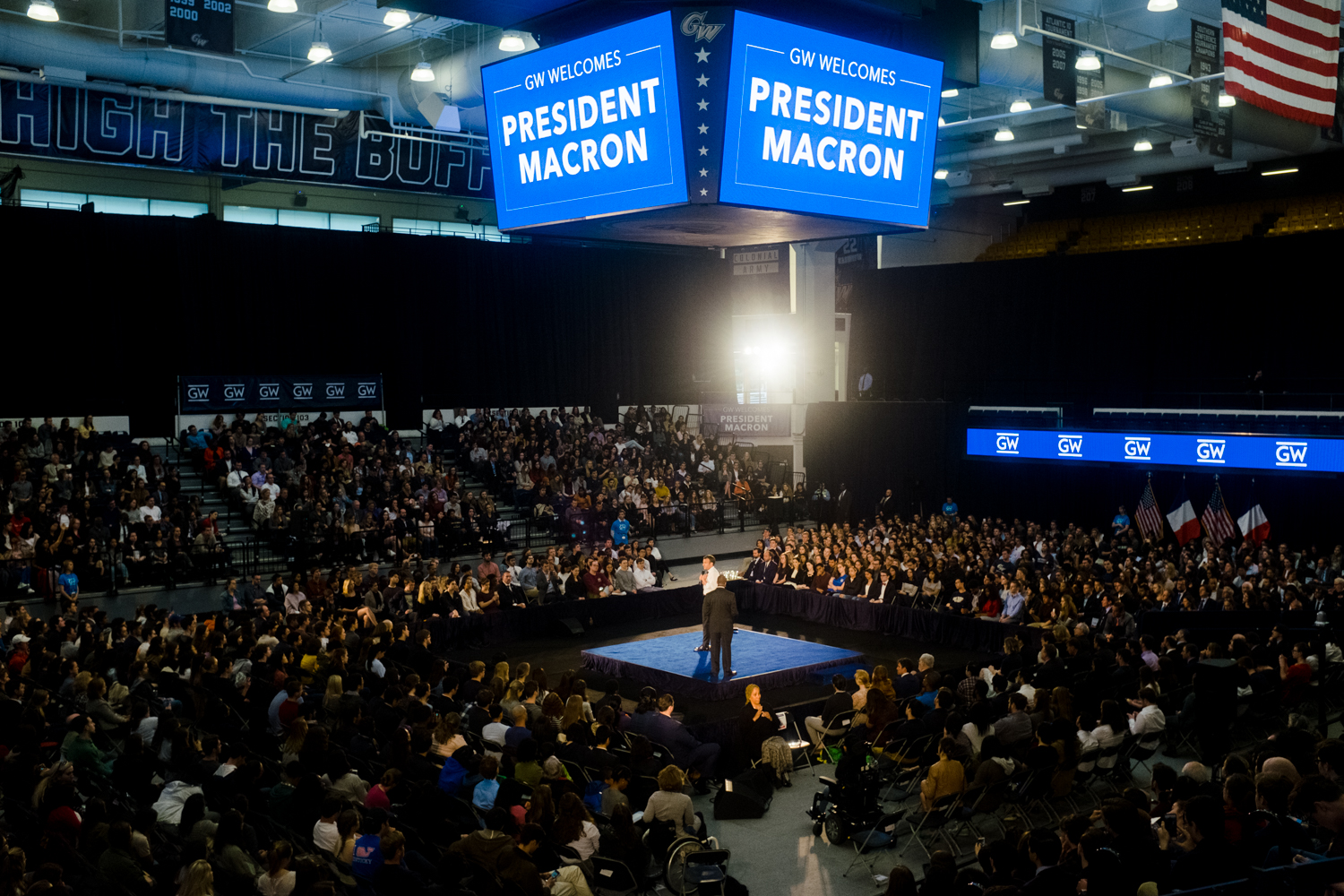 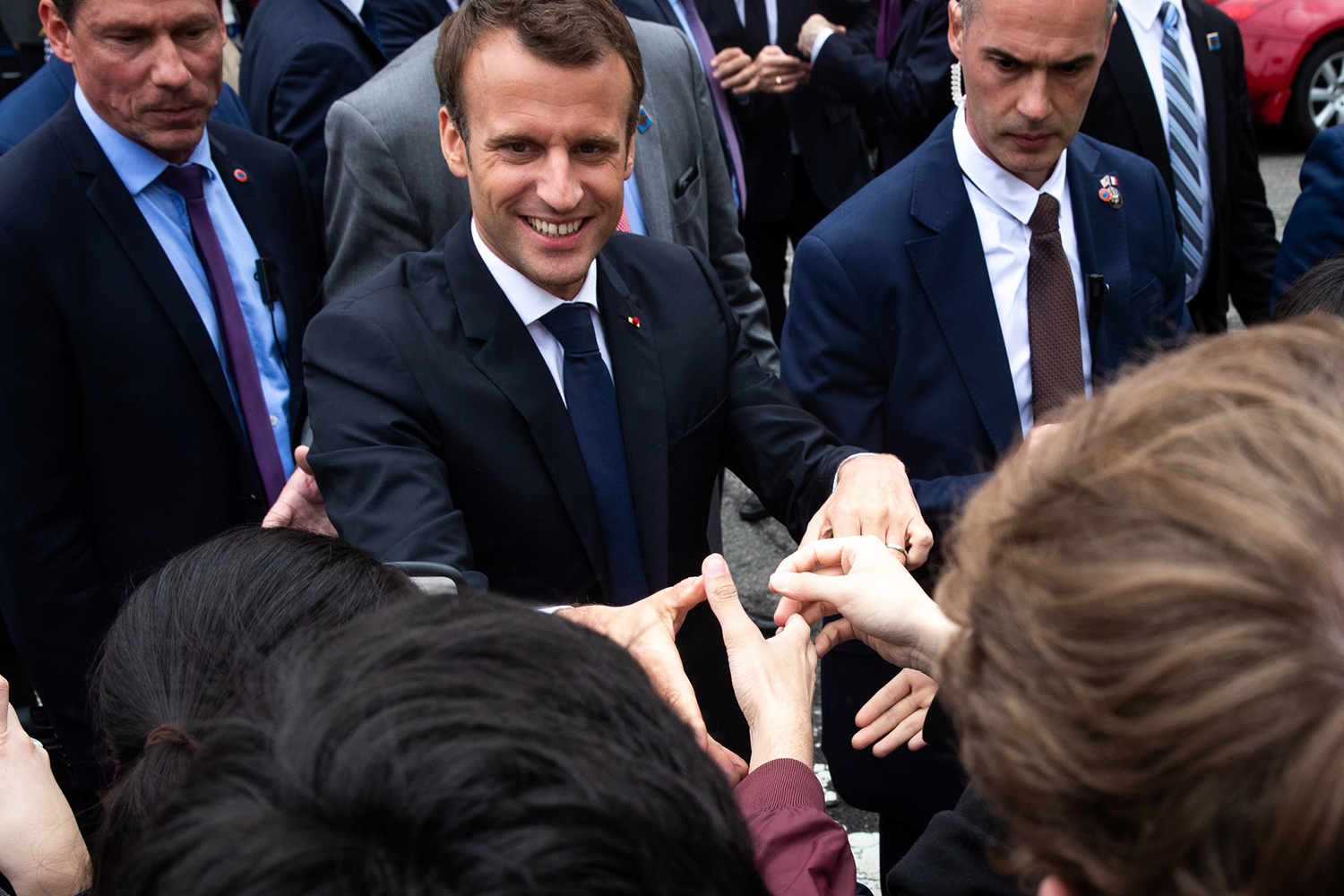 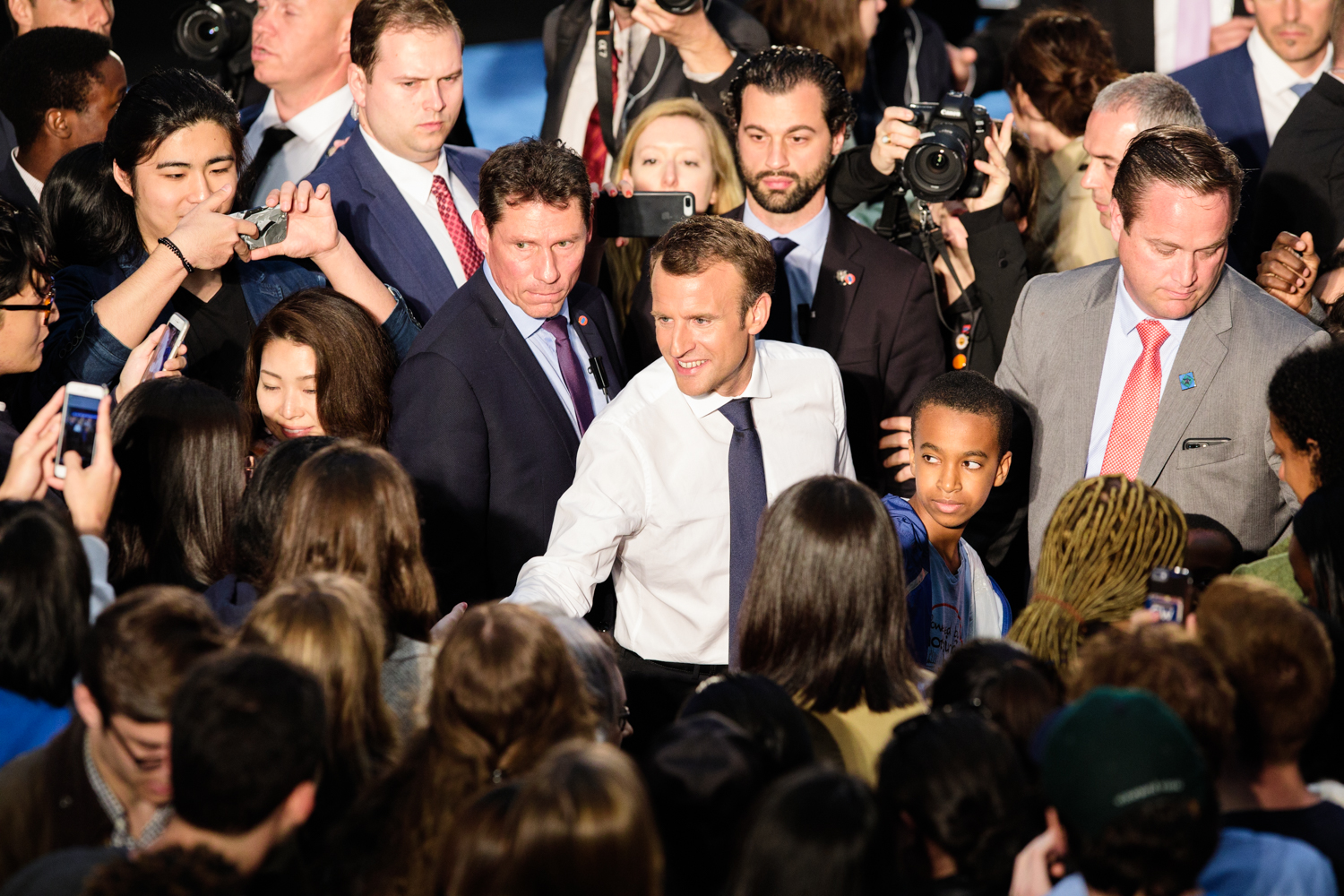 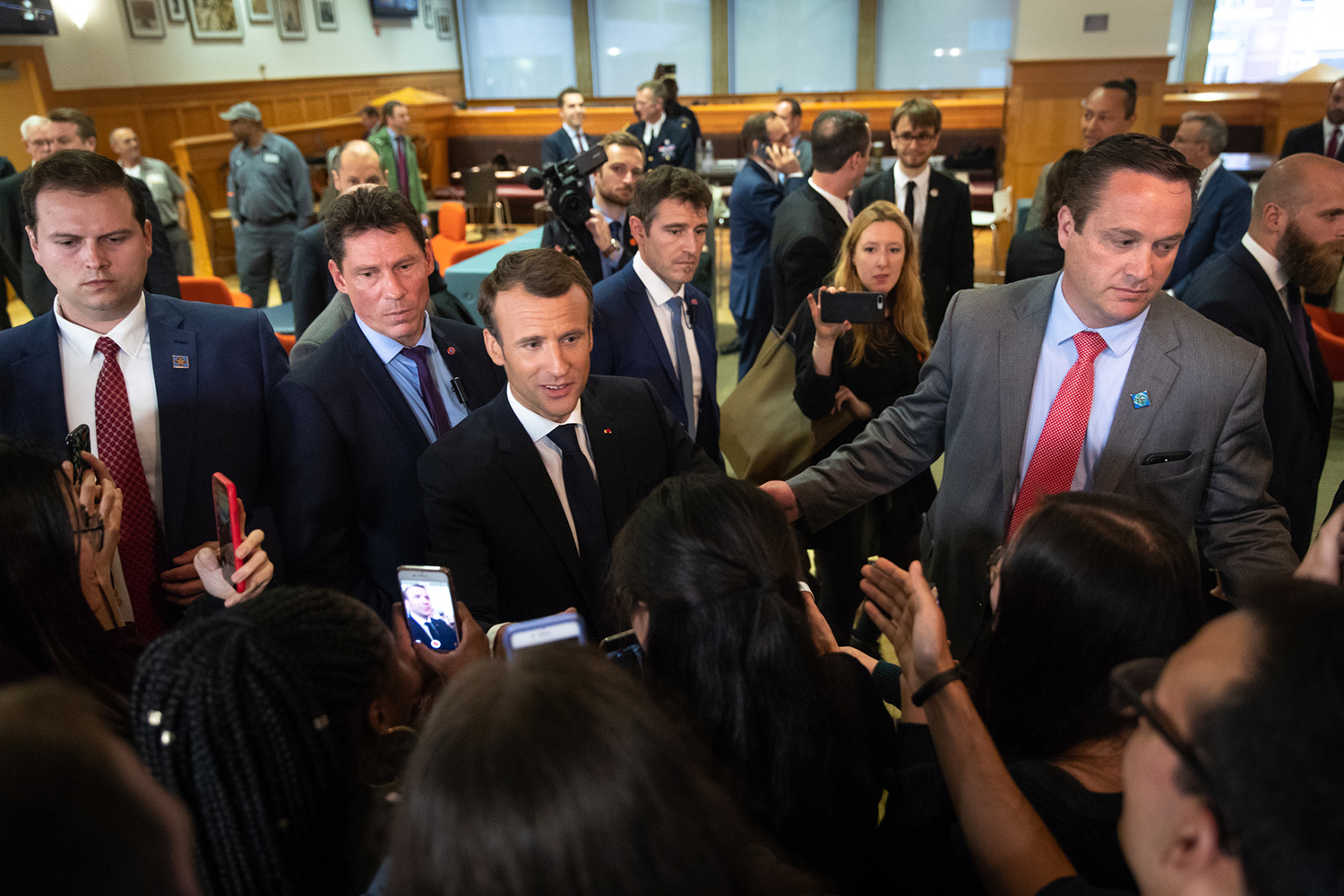 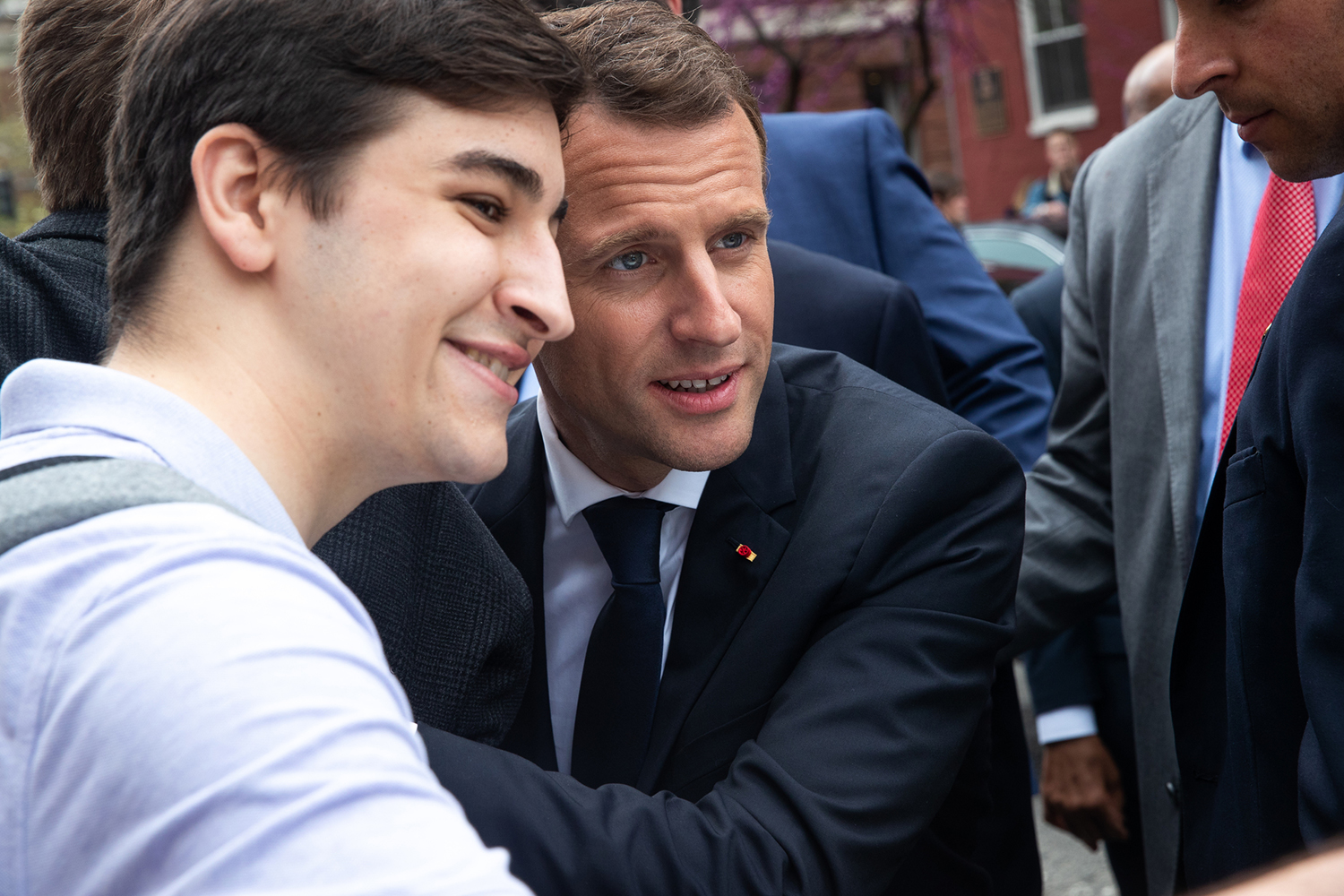 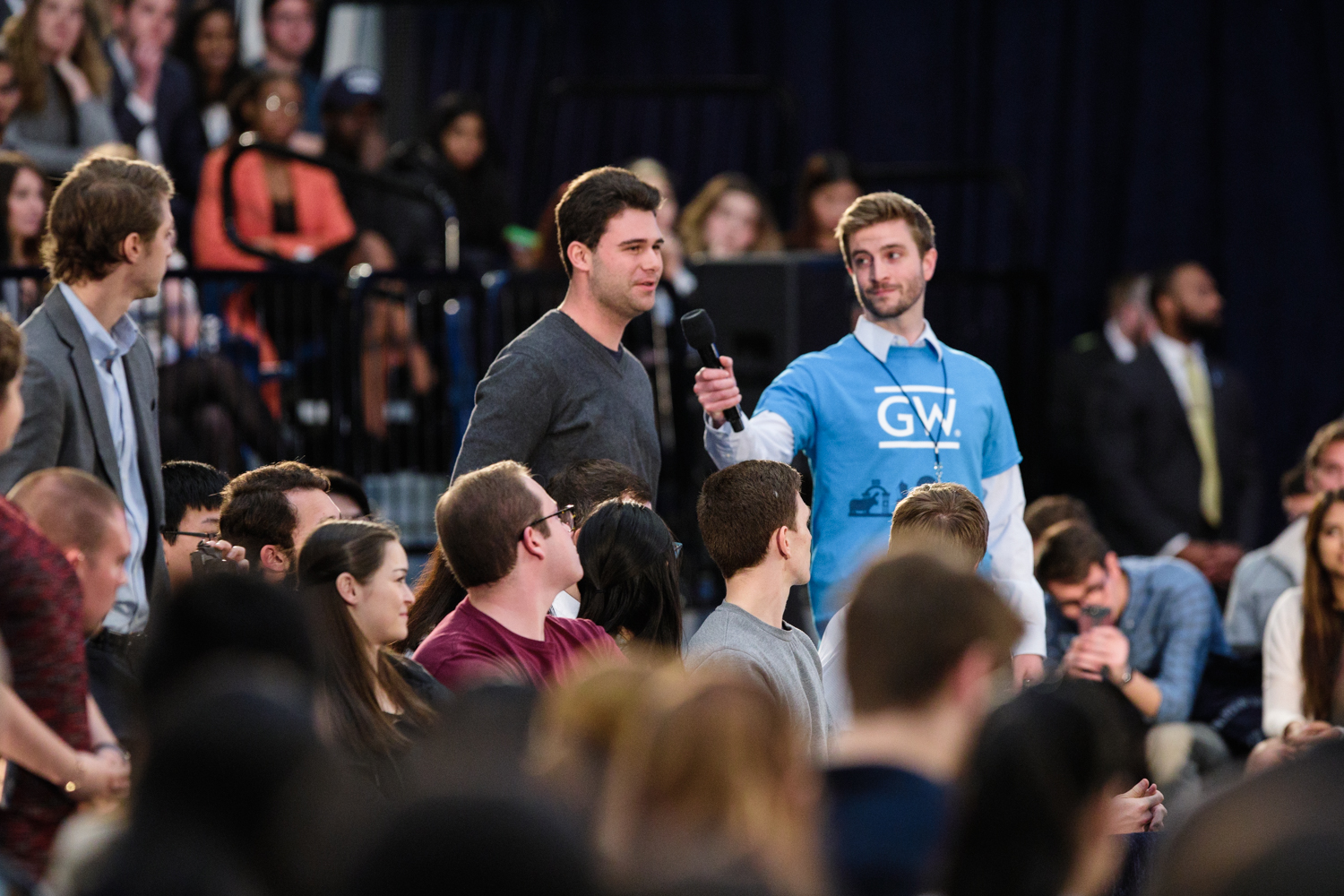 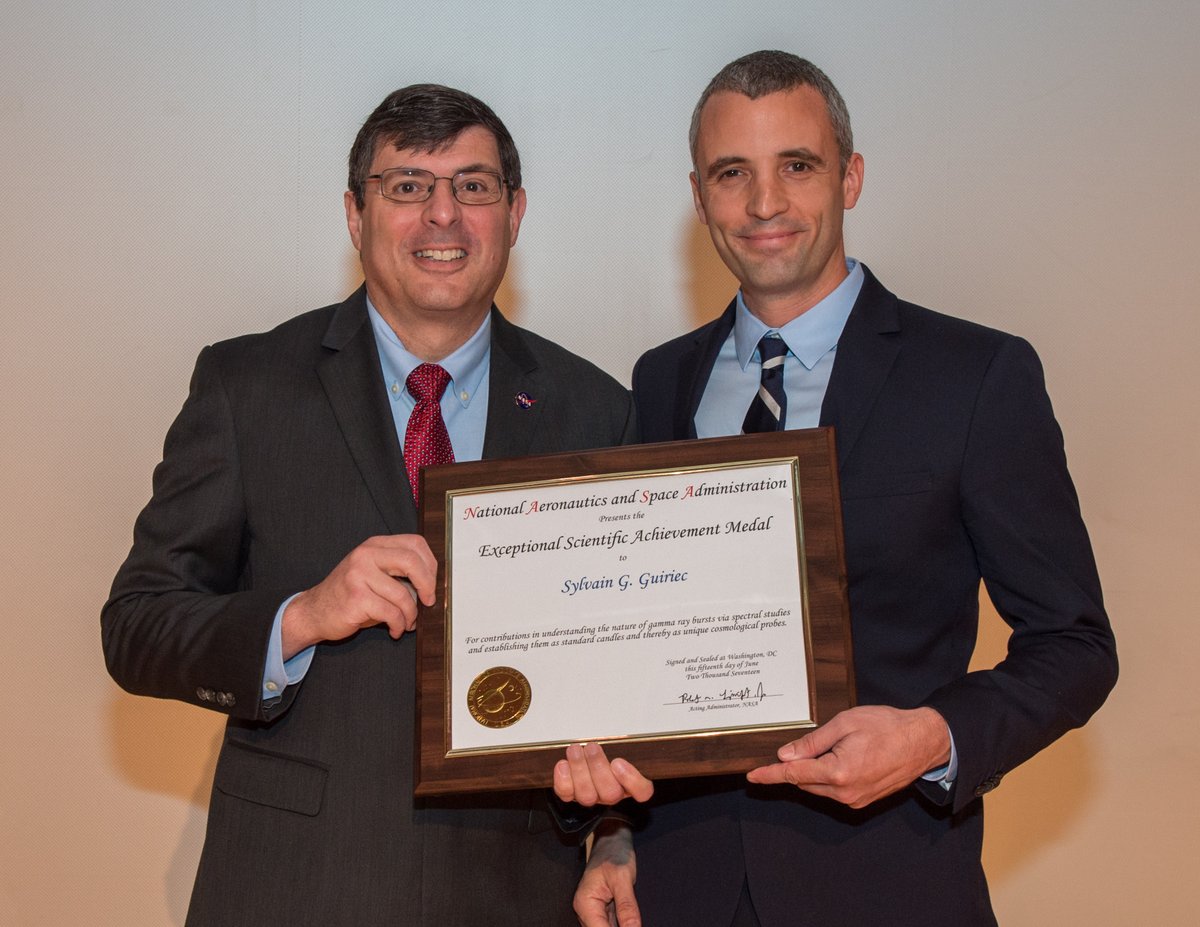