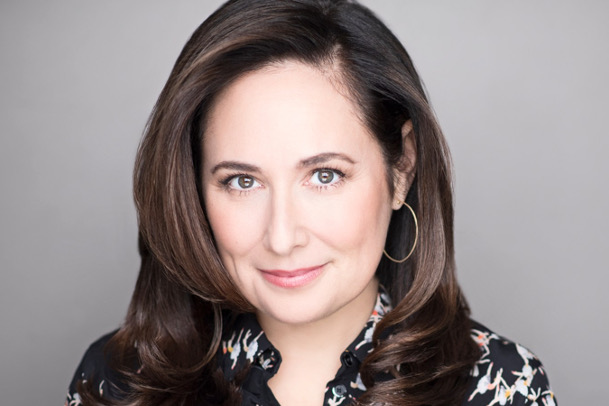 Jenna Segal, B. A. ‘98, was raised with the idea that “the only thing that can never be taken from you is your education.”

With that in mind, just three weeks after Russian troops invaded Ukraine, the Tony-award winning producer and her husband, Paul, sat down with George Washington University’s Elliott School of International Affairs Dean Alyssa Ayres and professor Marlene Laruelle to find a way to offer immediate assistance to scholars under fire in Ukraine.

These scholars, many of whom have fled their homes, have important stories to tell, according to Segal. “The Dark Ages were the downfall of educated societies,” she said. “The best we can do [now] is to support educated societies. An educated refugee is invaluable to this goal.”

The Segals’ gift to establish the innovative Fund for Scholars Affected by the War in Ukraine enables the Elliott School to “extend a helping hand to scholars at risk in a time of war,” said Ayres. “Through the institute that professor Laruelle directs, our school already has in place a network enabling us to quickly put this plan into action.”

The Segals’ gift creates two different avenues for supporting scholars based in Ukraine – or who were forced by the invasion to flee the country. Each semester for five years, the Elliott School will welcome three visiting fellows to campus, with compensation commensurate with their experience. In addition, 10 Ukraine-based scholars each year will receive annual stipends to allow them to continue their work – either in parts of Ukraine at a distance from the violence or in neighboring countries.

Run by GW’s Institute for European, Russian and Eurasian Studies (IERES), and headquartered at the Elliott School, the new program is a first for the school. “When we heard about the Segals’ interest, we realized this would be an extraordinary way to help scholars based in Ukraine and enable them to eventually rebuild the country,” said Laruelle, IERES director and a noted expert on the region.

GW President Mark S. Wrighton said that the Segals’ generous support “will improve the lives of scholars in Ukraine while contributing to the diversity and quality of the scholarship and research taking place on our campuses.”

“The establishment of this fund at the George Washington University will undoubtedly further the Elliott School of International Affairs’ important global reach and impact,” Wrighton said.

Jenna Segal learned activism early, attending women’s rights marches with her mother. Advocating for equal rights is part of who she is, along with an exceptional resolve to do her part to make the world a better place. “You can sit there and complain,” she said, “or you can figure out how you can effect change.”

Her career took shape at GW when she caught the media bug after attending an event featuring alumna Dana Bash, then a CNN newscaster. Introducing herself to Bash, Segal told her that she would love to work at CNN. The newswoman took Segal at her word, offering an internship, for which Segal received academic credit. “I worked 50 hours a week for no pay, and it was worth every minute,” she said.

Building on what she learned from the world of political talk shows, Jenna Segal transitioned to the entertainment industry a few years later, working across the VIACOM networks, delving into animation, documentaries, sports, variety shows and more.

In 2009, Jenna Segal established her own production company, Segal NYC, focused on women in Broadway and Off Broadway, as well as in film, television and sports. Her shows have won or been nominated for more than a dozen Tony Awards, with her Broadway production of “Hadestown” winning best musical in 2019.

Asked which of her many professional accomplishments brings her the most pride, Jenna Segal names two: reworking the 1950s movie, “Gigi,” into a Broadway play relevant to our times, and The Heidi Thomas Writers Initiative at the Signature Theatre in Arlington, Virginia.

For “Gigi,” she hired the esteemed British playwright and screenwriter Heidi Thomas to “bring it back to the women’s perspective, to show how complicated it is to be a woman.” Her work with Thomas led to the Signature Theater initiative, which ensures the production of at least one show by a female playwright each year.

With the Fund for Scholars Affected by the War in Ukraine, Jenna Segal has again taken action in line with her ideals and her passion for history and storytelling. “We need to get these [scholars’] stories down,” she said.

Donna Arbide, GW’s vice president of development and alumni relations, said that the Segals’ gift “is a shining example of the power of philanthropy to improve people’s lives.”

“We all read the news of this horrifying situation and wish we could help, and the Segals took the initiative to show us how individuals can change the world one life at a time,” Arbide said. “Their incredible generosity enables the Elliott School to meet a truly urgent need to keep learning alive at a critical time in world history.”

Contributions to the Fund for Scholars Affected by the War in Ukraine will enhance the Elliott School’s ability to bring visiting fellows to campus from Ukraine and provide financial support to  scholars displaced by the war.