Elena Kagan: ‘Every Case is Consequential’ 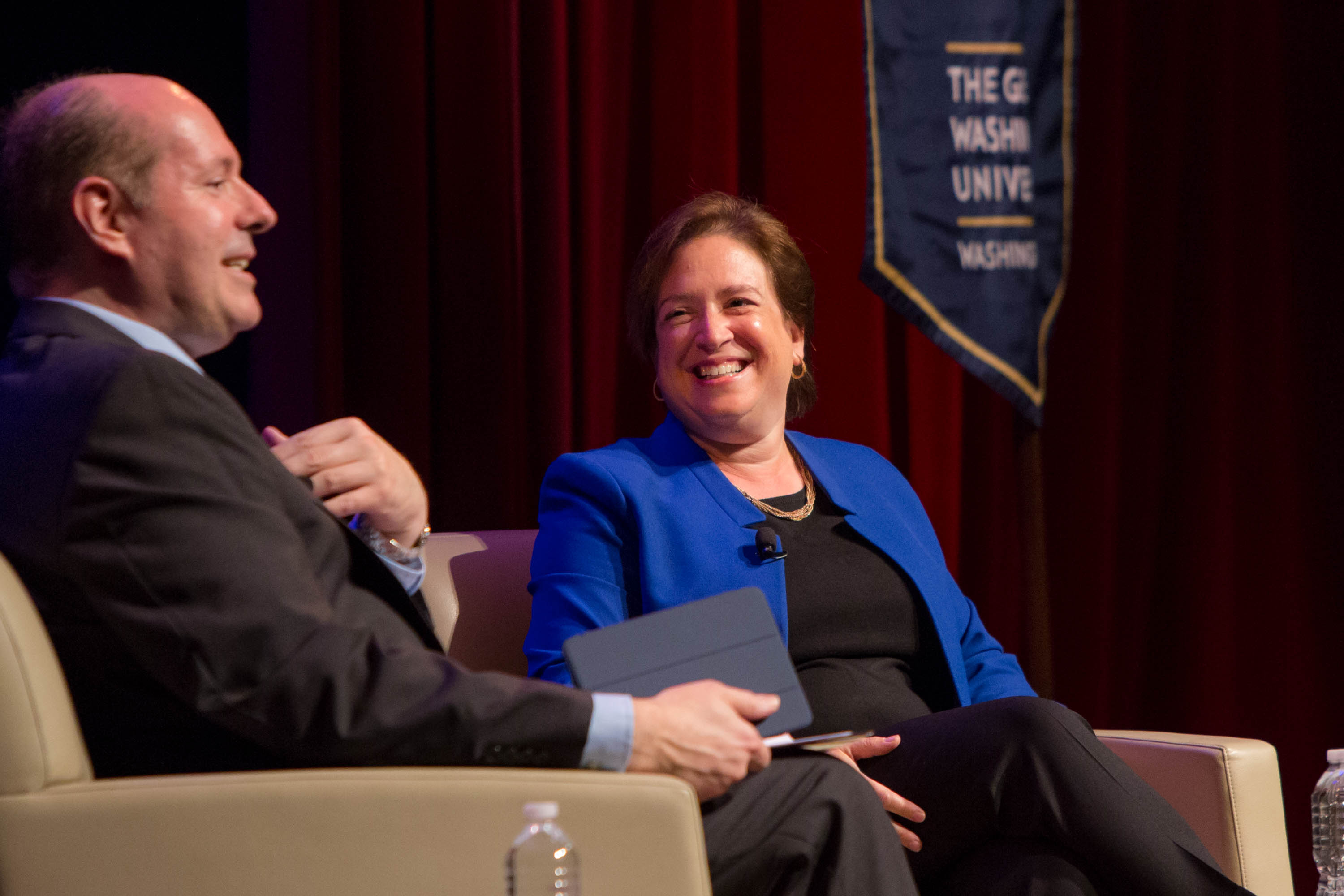 Supreme Court Justice Elena Kagan doesn’t consider herself to have been destined for the nation’s highest bench.

In fact, she told a packed audience at Lisner Auditorium Tuesday, “I went to law school for all the wrong reasons.”

“All of my career has been like that—a lot of serendipity, a lot of chance,” she said.

“We met when he came to a party at my house,” Justice Kagan said.

“Our parties were not like your parties,” Mr. Clark added hastily to the audience.

It was a “heady experience,” Justice Kagan said.

After her clerkship, Justice Kagan worked for a few years as an associate at D.C. law firm Williams & Connolly, then taught at the University of Chicago Law School. She served as an adviser to President Bill Clinton from 1995 to 1999, first as associate White House counsel and then as deputy assistant to the president for domestic policy and deputy director of the Domestic Policy Council.

Subsequently, she became a visiting professor and, eventually, the first female dean at Harvard Law School.

In 2009, President Obama selected her as the first female solicitor general—the lawyer who argues for the federal government before the country’s highest courts. At the time, Justice Kagan had never before argued a case in an appellate court.

Her first argument was on the government’s behalf in Citizens United v. Federal Election Commission, a landmark campaign finance case before the Supreme Court.

“I have a pretty reasonable opinion of myself—I’m not suffering in the self-esteem department,” she said, remembering the moments before she took the podium. “But my heart was pounding.”

In the end, Justice Kagan had barely finished the first sentence of her argument before the late Justice Antonin Scalia leaned over the bench, booming, “No, no, no, no, no!”

“That kind of got me into it,” she said, laughing.

Justices Kagan and Scalia were close friends until his death in February, going on frequent hunting trips together. Their ideological disagreements, she said, were part of that friendship.

“He was such an extraordinary writer and a powerful thinker,” she said, citing his persuasive advocacy of textualism as a lasting legacy.

“You are the future of the legal profession, so to the extent we can communicate with you, we’re shaping the next generation of legal thought,” she told the audience—a majority of whom were first-year students from GW Law.

Justice Kagan also provided insight into the Supreme Court decision-making process. After each case is argued the justices hold a post-argument conference and, in order of seniority, each casts a non-binding preliminary vote.

Questions from the bench during argument can be “an opportunity to start the conversation I’m going to end at the post conference,” Justice Kagan said. “Sometimes the lawyer is the conduit by which you talk to your colleagues.”

At the end of the conversation, a student asked which case during her time on the bench was, in her opinion, the most consequential.

“Every case is consequential to someone,” Justice Kagan said. “You owe it to that someone to approach everything with a high degree of seriousness.

“Sometimes my clerks, I think, are amused and surprised by this,” she continued. “We’ll spend as much time on some abstruse question of civil procedure that no newspaper is going to report on as we will talking about the case that’s going to land on the front page of the New York Times. And I think that’s the way it should be.”