Editors Take Students Behind the Scenes of ‘Spotlight’

Journalists whose work inspired the Academy Award-winning film speak to a GW audience at a special screening event.
April 18, 2016 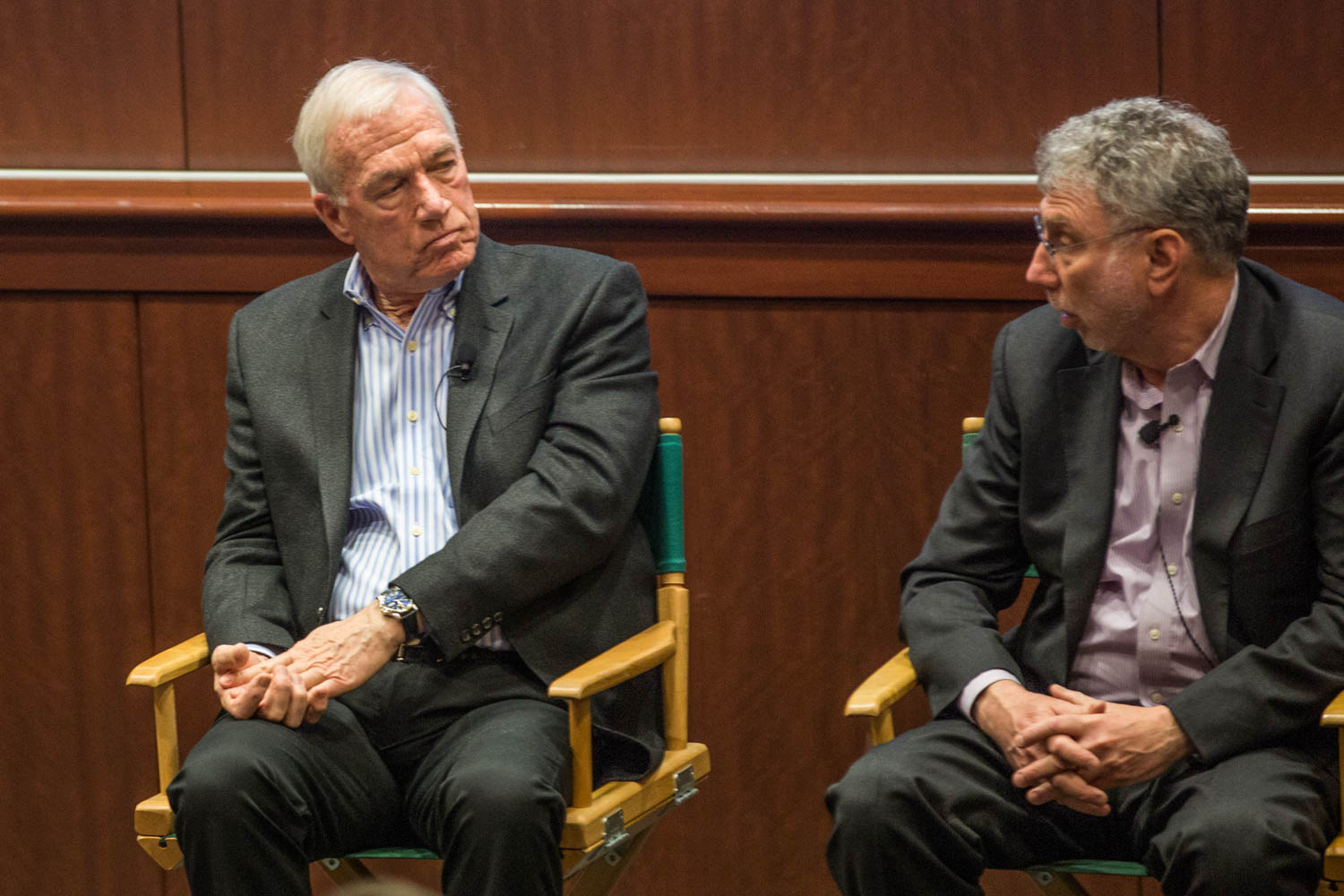 Walter Robinson (left) and Martin Baron discuss their work as part of a team of investigative journalists that inspired the movie "Spotlight." (Zach Marin/GW Today)

To Martin Baron, exposing widespread sexual abuse by Catholic priests and the extraordinary lengths the Boston Archdiocese went to cover it up does not make him a hero.

The former editor of the Boston Globe told an audience of GW students he is “allergic” to the notion of heroics. “The word ‘hero’ gets thrown around a lot.”

“We were doing our jobs,” he said. “Truly, this is the work journalists are supposed to do, particularly against powerful institutions. The more powerful the institution, the greater the obligation to pursue wrongdoing when we discover it.”

Mr. Baron, now executive editor of The Washington Post, spoke to School of Media and Public Affairs students Thursday night, along with his former Globe colleague Walter Robinson, after a special screening of “Spotlight” in the Marvin Center Amphitheatre.

The Oscar-winning film was based on the work of the two (played in the film by Liev Schreibner and Michael Keaton, respectively) and their small team of investigative journalists who produced a groundbreaking series of stories in 2002 on the Catholic Church’s systematic concealment of child sexual abuse in Boston.

The film is a testament to the power of journalism, said SMPA Director Frank Sesno in an introduction before the standing-room-only crowd. The event was part of SMPA’s Silver Anniversary celebration series.

“This was one of the toughest and most important stories to report,” Mr. Sesno said. “This is why we do what we do. We do this not just because we want to do great journalism, although we do, but because it is an essential part of being a democracy.”

In a question-and-answer session with the editors, moderator Cheryl W. Thompson, associate professor of media and public affairs and investigative reporter at The Washington Post, asked whether they were surprised Hollywood got it right.

While nervous when first approached by two aspiring filmmakers who had limited experience, Mr. Baron said by the time the movie came out they were confident.

“We spent a lot of time with the writers. By the time we saw the movie, we knew they were serious people and had done a serious inquiry into how the work was done,”  he said.

There were a few bumps along the way, however, Mr. Robinson added.

At one point a review by a Hollywood “script consultant” found the movie “a little boring” and recommended introducing a love interest or sex scene, he said. That made Sacha Pfeiffer (played by Rachel McAdams), the only prominent woman in the film, very nervous, Mr. Robinson joked.

The editors talked about how Mr. Baron—a newcomer to Boston who was not Catholic—was able to see a column on a priest sexually abusing children as a subject worthy of further investigation.

“I was coming into it as someone who was deemed to be an outsider,” said Mr. Baron. “I had no loyalties, no worries about friendships that might be severed.

Mr. Robinson, a lifelong Bostonian, said he was one of a generation of editors who were too deferential to the church. “Every editor had come up through the system,” he said. “We were acculturated not only to the way things were at the Globe but to the community.”

Calling Mr. Baron a “gutsy guy,” Mr. Robinson said that it was the right assignment at the right time. “We quickly discovered that we were at the tip of a pretty damn large iceberg.”

When it came to what was the hardest part of chasing the story, there was no question.

“Talking to so many survivors,” Mr. Robinson said. “Every interview was emotionally wrenching.

“To this day, I’m still in a bit of shock when I try to grasp how extensive this was,” continued Mr. Robinson, who was raised Catholic. “How many thousands of children were abused by literally thousands of priests just in the United States, that it had gone largely undetected because the church’s principal goal was to keep it secret.”

In the weeks after the initial 2002 Boston Globe expose, Mr. Robinson said, more than 300 victims called the newspaper wanting to tell their stories. The one he remembers most was an 87-year-old man who had been abused in 1926. “He had lived his whole life, and I was the first person he’d ever told,” he said. “The number of lives ruined needlessly is mind boggling.”

In response to a student’s question about repercussions to their personal lives, the editors said there weren’t any.

“We were prepared to have people picketing the newspaper, and it didn’t happen,” Mr. Robinson said. The fact that the story was so well sourced and documented—not just the word of a few anonymous sources—was paramount, he added. The Globe followed with no less than 600 stories on the scandal.

“What you saw subsequent to the Globe’s reporting was other news organizations starting to do what the Globe did,” said Mr. Baron. “You saw a collapse in the deference on the part of the press, on the part of prosecutors, legislatures. That played out around the world.”

The Globe’s story—and the movie it inspired—has illustrated the capacity of investigative journalism to effect change, Mr. Baron said.

“I watch this film and think I’m proud to be a journalist,” Ms. Thompson said.