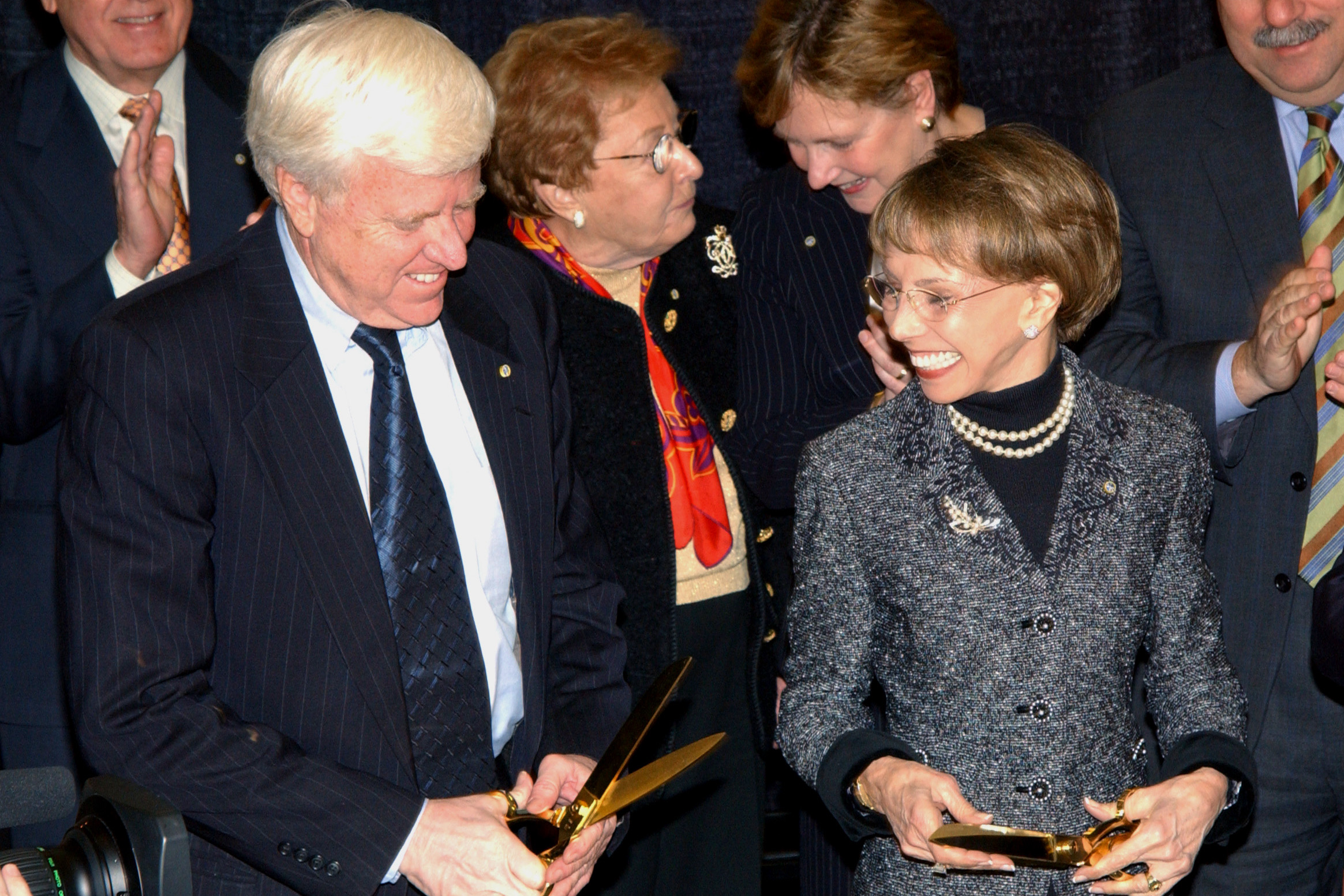 Ric Duquès and Dawn Brill Duquès at a ribbon cutting on the Foggy Bottom campus in 2006. (GW Today)

Soulmates who found each other at Foggy Bottom, Henry “Ric” Duquès, B.B.A. ‘65, M.B.A. ‘69, and Dr. Dawn Brill Duquès, B.A. ‘69, began their lifelong love for each other—and the university—on campus. Married mere days after graduation 57 years ago, today they are among the George Washington University’s most influential alumni families.

While making their mark in financial services, the field of education, the hospitality industry, our university and more, they have given generously of time and treasure to strengthen their alma mater. Ric Duquès is a GW Trustee Emeritus, a Monumental Alumni, and two of their children (David, B.B.A. ‘97, and Tiffany, B.B.A. ‘02) are alumni, with the third generation already considering the Buff and Blue tradition.

Their most recent gift of $2.5 million will invest in game-changing technological upgrades and physical enhancements at the GW School of Business (GWSB) building bearing their name, Ric and Dawn Duquès Hall. The family’s previous $5 million gift, announced to a standing ovation at Tiffany’s 2002 commencement, funded the initial construction that allowed GWSB to relocate from its former home in the Hall of Government.

Now, their generosity will expand and provide state-of-the art updates to the instructional design studio, transform the reach of two global classrooms and upgrade the entrance foyer into a welcoming mini lobby for networking or simply relaxing between classes. The enhancements are slated for completion in fall 2023.

“The modernization will ensure the facility mirrors our stellar academic offerings and catalyzes inspiration and innovation,” said GWSB Dean Anuj Mehrotra. “The Duquès family’s latest gift, will dramatically elevate the teaching and learning experience with capital infrastructure quality that is commensurate with GWSB’s global brand.”

Opening in January 2006, Duquès Hall’s 167,000 square-foot-complex was “the pride of the university,” a state-of-the-art addition to Funger Hall that once was highlighted on campus tours for prospective students, said the dean. Over the years, GWSB students have witnessed markets rise and fall, industries transform and business and educational technology evolve within its walls. At the same time, the school emerged as a leader in global business education, offering customized degree paths, experiential and lifelong learning. The pandemic accelerated the pace of program and pedagogy changes.

These upgrades to Duquès Hall will reflect this evolution, according to the dean. The reconfiguration of GWSB’s flagship global classrooms will add the flexibility for students to collaborate in small groups, thanks to reversible seating that can face forward to the podium or easily turn to face students in the row behind.

Technology improvements will allow students—or guest speakers—to participate seamlessly in courses from any location in the world. Cutting-edge new equipment, an expanded footprint and soundproofing for the Instructional Innovation Studio will provide mission-critical capabilities that will take current digital content creation for hybrid and online education to new heights.

“The Duquès name is synonymous with excellence,” President Mark S. Wrighton said. “We are grateful for the family’s continued commitment to invest in the George Washington University and for their recognition that our excellence is greatly enhanced by the contributions and engagement of our alumni."

Ric Duquès credits much of his professional success to his strong foundation in accounting, ”the nuts and bolts language of business,” he acquired at GW. His studies were possible only through the critical scholarship support that opened the door to higher education for a first-generation college student from modest means.

“I had no way to pay for a college education at GW in 1961,” he said. “The university invested in me. It seems very appropriate to Dawn and me that we share some of our success with GW.”

He first attended GW on a basketball scholarship as an undergraduate, then gained needed tuition support for his MBA through a teaching assistantship.

Ric Duquès went on to become a pioneer and titan in the data processing services industry, guiding the helm of some of the world’s best-known financial services companies, including Automatic Data Processing Inc. and American Express. Culminating his career as CEO and chair of First Data Corporation (FDC), he oversaw KKR’s $29 billion FDC takeover, one of the largest leveraged buyouts of a tech company, global investment company.

The couple’s desire to give back preceded their career and financial success, with Ric Duquès making his first gift of $20 to GW soon after graduation. As the couple’s capacity and engagement grew over the years, they balanced their pay-it-forward outlook with the mindfulness of sound accounting and financial analysis. When considering the initial $5 million naming gift for Duquès Hall, the couple tasked their son Scott with calculating the present-day value of Ric’s 1960s scholarship and fellowship; they then took a family vote that approved a generous “rounding up” of the GWSB naming gift in appreciation and recognition of their alma mater’s positive impact on his career.

A proven educator and entrepreneur, Dawn Duquès’ “heart lies in education,” and she has successfully worked to empower youth and support communities in various settings, including starting afterschool programs and turning around a public school’s continuing education school program. She has also served as a member of GW’s School of Education and Human Development (GSEHD) National Council and as a trustee on the board of Teacher’s College of Columbia University.

A firm supporter of the transformative power of education, Dawn Duquès has “always tried to figure out the best way I can help that empowers people in the long run. And I really believe that you do that primarily through education,” she said.

A self-described “corporate wife” who raised four children, including triplets, Dawn Duquès is herself a life-long learner, who has earned five degrees, including a Doctor of Education from Nova Southeastern University, a master’s degree from Teachers College, Columbia University, an associate’s degree from Mitchell College and a second associate’s degree in culinary arts from the Art Institute of Fort Lauderdale—an accomplishment all the more impressive given her childhood learning disability that delayed reading until late elementary school.

She also earned a certificate in teaching English as a Second Language from Teachers College while serving as a trustee of the institution. Asked by a fellow trustee why someone with a terminal degree was interested in a certificate program, her response was “because I’m not terminal, I still like to learn.”

Donna Arbide, GW’s vice president of development and alumni relations, noted that Ric Duquès’ basketball coach once described him as the “sparkplug of the team” in a media guide. ”This spark that was ignited nearly six decades ago is still going strong and has propelled him forward, along with everyone and everything around him,” Arbide said. “It’s gratifying to see this family’s legacy continue to expand as they bring together their individual experiences into a united love and support of our university.”

At GW, we change the world one life at a time. The impact of scholarships can ripple through families, generations and entire industries. Anyone interested in opening the doors of opportunity for a talented student interested in business is encouraged to contribute to the GWSB Scholarship Fund.