Dr. Fauci Tells GW Students to ‘Stick with the Science’ 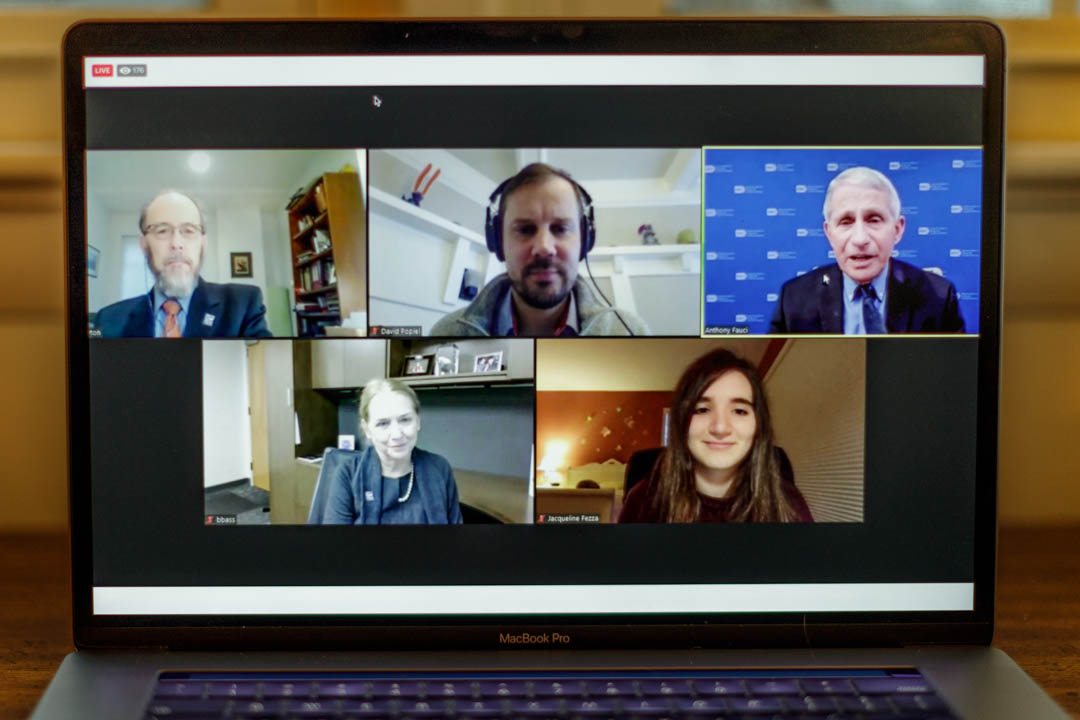 Anthony Fauci, director of the National Institute of Allergy and Infectious Diseases, said during an exchange with students at the George Washington University School of Medicine and Health Sciences that one way to combat the politicization of science is to make decisions “purely on the science.”

The annual summits serve as the cornerstone of the M.D. program’s CPH curriculum, offering applied educational experiences that enable students to develop the public health leadership and interprofessional skills be able to identify, understand, and address community health issues both within and beyond the walls of the clinic. The summits also offer students an opportunity to understand the economic and social conditions that influence differences in health status and the roles clinicians can play to help improve them.

Since its inception in 2014, the HIV Summit for first-year medical students has opened with a keynote address from Dr. Fauci, the nation’s foremost infectious disease expert.

“Just two weeks ago CNN said of Dr. Fauci, ‘He is the national symbol of sound medical advice,’” said Dr. Deyton, who for 12 years worked for Dr. Fauci during the early days of the AIDS epidemic.

“You are about to see that Dr. Fauci is also a terrific educator,” he said. “In his presentation, you’re going to see how, by following the science, a clinician can influence medicine, community health and health policy.”

In his remarks titled “Ending the HIV/AIDS Pandemic: A Personal Journey Following the Science,” Dr. Fauci recalled the evolution of his career, the events that influenced the direction he took and how that led him to become the face not only of HIV/AIDS research but also the national response to the COVID-19 pandemic.

In 1981, he recalled that he was leading a small but successful lab trying to develop cures for inflammatory diseases of blood vessels, known as vasculitis. At the same time, early cases of an as yet unknown syndrome affecting the gay community were reported in Morbidity and Mortality Weekly Report, an epidemiological digest published by the Centers for Disease Control and Prevention.

That article ultimately led Dr. Fauci to dramatically alter his career trajectory and focus on “this curious disease that I felt was going to be very important.”

Dr. Fauci wrote a paper explaining why he saw this new syndrome as important and submitted it to the New England Journal of Medicine (NEJM). It was rejected. Ultimately it was published by the Annals of Internal Medicine, but not before a NEJM reviewer told Dr. Fauci his paper had been rejected because “they thought I was being hyperbolic about this syndrome.”

The editors thought the tone of his submission was alarmist. In the paper, he wrote that “because we do not know the cause of this syndrome, any assumption that it is going to remain restricted to a particular segment of our society is truly an assumption without scientific basis.”

“Unfortunately, I was very prophetic, and I wish I were not,” Dr. Fauci  said.

Soon, the medical community realized the disease was not confined to the gay community and instead could be transmitted sexually as well as through blood and perinatally and was responsible for millions of infections and deaths.

Flash forward almost 40 years, and the world is again facing an illness with  high morbidity and mortality. On Jan. 23, 2020, Dr. Fauci published another prophetic journal article, “Corona Virus, More than Just the Common Cold,” in the Journal of the American Medical Association.

“The United States, unfortunately, has been the worst-hit country in the world, with 16 million cases, as a few days ago we hit the terrible landmark of more than 300,000 deaths,” he said.

Today, Dr. Fauci continued, the country is in the midst of a third wave of COVID-19 infection, with an exponential increase of cases over each of the two previous waves. “That’s the reason why, almost every day, we set a new record,” he said.

Addressing vaccine development, Dr. Fauci described Operation Warp Speed, the federal government’s program supporting the development of six different vaccine candidates, two of which — mRNA-based vaccines from Pfizer-BioNTech and Moderna — have now been approved by the U.S. Food and Drug Administration for emergency use authorization), making it the fastest program of vaccine development in history.

From the identification of the virus’ genetic profile on Jan. 10, the Pfizer and Moderna vaccines have moved through Phase I, II and III clinical trials and emergency use approval in just 11 months.

“People see things getting done quickly, and they think that science is really quick,” Dr. Fauci said. “It isn’t.

“The mRNA platform, and the ability to develop a spiked protein in the right conformation to produce a vaccine that is 94-95% effective, was the result of years — and when I say years, I mean more than a decade — of concentrated, good fundamental basic research,” Dr. Fauci said.