Legacy of Richard and Janet Southby will carry forward in the school’s new building.
April 8, 2014 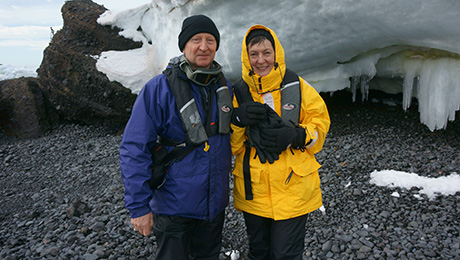 Richard and Janet Southby have been committed to public health throughout their careers.

Richard and Janet Southby have made a gift of $500,000 to the Milken Institute School of Public Health at the George Washington University.

The Southbys maintain close ties to Washington, D.C., and GW and have committed themselves to public health through their careers, education and community involvement. The Southbys’ gift will be recognized with the naming of the Southby Conference Room, located in the dean’s suite, on the seventh floor of the new Milken Institute School of Public Health building.

Richard Southby is one of the founders and dean emeritus of the Milken Institute SPH. His journey in public health began in his native Australia, where he had originally planned to go into hospital administration.  His career path, however, changed course when he attended Cornell University for his master’s degree.  He saw his future in the emerging field of health policy and developed a passion for putting more emphasis on public health on his return to Australia.

After serving as a full-time commissioner on the Australian Hospitals and Health Services Commission, he joined the GW faculty in 1979. He held numerous faculty and administrative positions, including executive dean and distinguished professor of global health in the Office of the Provost and Vice President for Health Affairs at the GW Medical Center and chair of the Department of Health Services Management and Policy.

Janet Southby served in the U.S. Army Nurse Corps for 31 years as a colonel and chief of the Department of Nursing at the Walter Reed Army Medical Center. At GW, she is a member of the School of Nursing Dean’s Advisory Council.

Richard Southby said one of his earliest projects as dean in 2001 was to create a conference room in the dean’s suite in Ross Hall, because he felt it was important for the school’s leadership to have an appropriate environment to hold meetings.

“It is very exciting that the Southby Conference Room is part of the new building for the Milken School of Public Health, where for the first time in our history as a school, the majority of faculty, staff and students are housed together,” said Richard Southby. “This will ensure the highest levels of interaction and communication among all groups, as well as providing opportunities for involving the broader D.C. community.