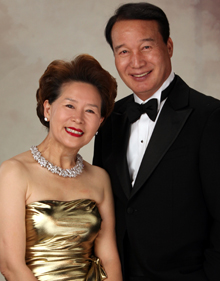 A new $1 million endowment will give SEAS students a chance to study in Korea.

The School of Engineering and Applied Science has received a $1 million gift to fund a student exchange program with Korea University in Seoul, South Korea.

The gift, which was given by Simon S. Lee and Anna H. Lee, will support the partnership that will officially begin in January.

“It is no longer enough just to be technically savvy,” says Mr. Lee, M.S. ’05. “Today’s students must embrace the notion of globalized partnerships and learn from other cultures in order to grow into tomorrow’s world leaders.”

“Their gift strengthens the university’s long-standing relationship with the Republic of Korea and offers our students what for many will be a life-transforming opportunity,” says Dr. Knapp.

Mr. Lee, a graduate of both GW and Korea University, wanted to create the endowment to build a bridge between the two schools.

“By working together and learning from each other, we can begin to lay the foundation for a cross-cultural partnership that can flourish for generations and strengthen over time,” says Mr. Lee.

Mr. Lee learned the value of an education at an early age.

His father, a South Korean farmer, died when he was 1; his mother died when he was 14. His older brother sold his rice farm to pay for Mr. Lee’s college education at Korea University, where he received a bachelor’s degree in industrial engineering.

“For me, education is one of the most important priorities in life,” says Mr. Lee. “When I give to GW I believe I am investing in the future of our society.”

Mr. Lee immigrated to the United States in 1979 with his wife, Anna, and began working for MCI Telecommunications as an engineer and bookkeeper. Seven years later, he founded and became the president and chief executive officer of STG, Inc., a government-contracting firm. Today, STG has nearly 1500 full-time employees and $300 million in revenues. STG provides more than 50 clients with support in information technology, applied engineering and professional services.

“When the four of us graduated together at the same commencement ceremony, it was one of the most satisfying and humbling days of my life,” he says. “The education my family and I received at GW is invaluable. I was moved by all GW has done for us, and my donation is a way that I can give back to the university.”

“Our students can no longer be simply technical experts. In a world where technological challenges demand interdisciplinary approaches, and solutions hinge on a complex balance of technology, economics, policy and politics, our graduates must be able to understand and embrace complexity. They must be able to lead teams that may be spread across the globe, cutting across cultures, time zones and many disciplines,” he says.

“Studying abroad helps lay the foundation for the development of this expertise.”

Dr. Dolling has already established a partnership with University College in Dublin, Ireland, and he plans to develop more partnerships with universities in Europe, Asia and South America.

Mr. Lee’s gift will especially aid students, who without financial aide would not be able to study abroad.

“I want other people to be able to share the educational experience that I was afforded,” says Mr. Lee.

“I believe he wants to share what he experienced and learned from two cultures with students of both universities through this endowment,” he says.

SEAS will begin recruiting students for the exchange program this fall. Any student in good academic standing is eligible to apply.

Return to the GW Today homepage.