Cornel West to Students: ‘We Want to Hear your Voice.’

In a wide-ranging conversation with CCAS professors Xolela Mangcu and Vanessa Wills, the celebrated public intellectual discussed governments, philosophers and the blues.
October 15, 2021 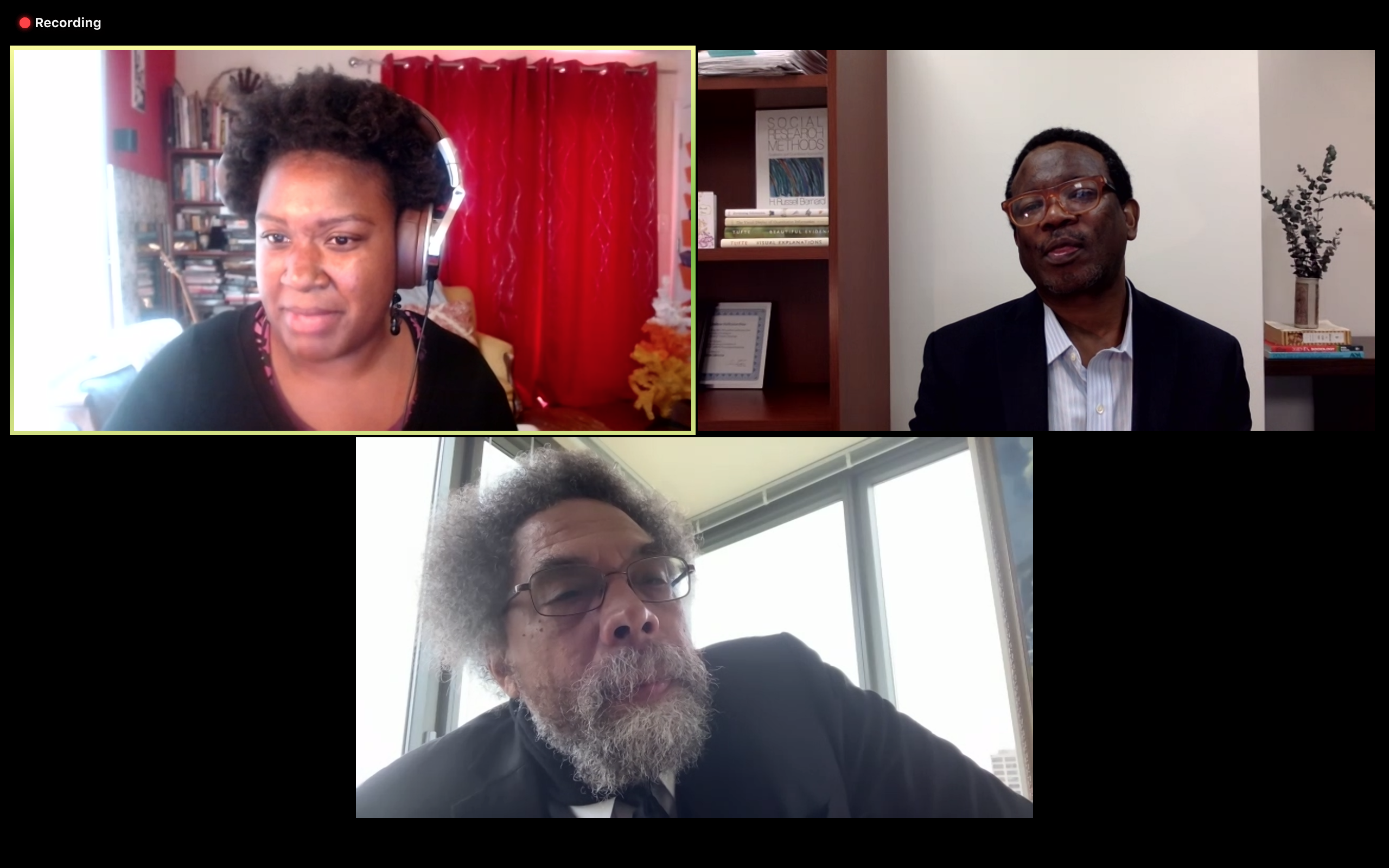 Renowned philosopher and author Cornel West encouraged students to carve out their own intellectual paths while following in the footsteps of great thinkers during a remote event on Wednesday with the Columbian College of Arts and Sciences (CCAS).

The wide-ranging conversation with Professor of Sociology Xolela Mangcu and Assistant Professor of Philosophy Vanessa Wills touched on topics from the legacy of Nelson Mandela to the limits of liberalism to the connections between music and philosophy.

The dialogue was held in memory of Charles W. Mills, a towering figure in African philosophy who died in September. All three speakers noted their debt to Dr. Mills, who helped frame contemporary debates about institutional racism. Each also discussed their own influences and the changing nature of their work.

Much of the conversation focused on helping young people reconcile philosophical thought with academic and professional careers. Dr. West advised them “to be true to themselves and to be forces for good, tied to a love and compassion with people who are suffering.”

“That’s what greatness is. It has very little to do with worldly success,” he said.

The event was sponsored by the Columbian College of Arts and Sciences and the Departments of Philosophy, Africana Studies, Anthropology, Political Science, English, Humanities Center, American Studies, Religion, Sociology and History.

A professor at Union Theological Seminary who previously taught at Harvard University and Princeton University, Dr. West is the author of 20 books including seminal texts such as “Race Matters” and “Democracy Matters.” He is widely-known for his frequent appearances on “Real Time with Bill Maher,” CNN, C-Span and Democracy Now.

During the event, he likened the complexities of building a philosophical credo from various schools of thought to composing music. “Very jazz-like,” he said. “You’re pulling here, you’re pulling there, you’re trying to make sense. Often times it’s inconsistent and incoherent, but you’re still trying to work it out given these dissonant elements.”

In an exchange with Dr. Mangcu, Dr. West noted how even a revered figure like former South African President Mandela continued to evolve his beliefs over his lifetime. “Mandela’s one of the greatest figures of late modernity, no doubt about that. But he’s still a human being like anybody else,” said Dr. West, who delivered a historic 2005 address in South Africa on the meaning Nelson Mandela.

Dr. Mangcu, the interim director of the CCAS Africana Studies Program, is currently completing a biography of Mr. Mandela, the first ever by an African scholar. As an academic and a journalist in post-apartheid South Africa, Dr. Mangcu frequently met with Mr. Mandela and watched as he refined his philosophy and politics. “He was once a nationalist. He was once a communist. He was once a liberal,” Dr. Mangcu said. “He responded to the situation as it presented itself to him.”

Dr. Wills, whose areas of expertise include political philosophy and the philosophy of race, also noted that her experience as a philosopher has been guided by the real-world applications of her scholarship.

The discussion also touched on whether liberalism—with its commitment to individualism and democracy—is equipped to meet contemporary challenges. Dr. West defended liberalism for protecting human rights and liberties, but noted its “blind spots,” including systems that devolve into “predatory capitalism, patriarchy and homophobia.”

Dr. West called on students to resist the temptation to dedicate themselves to financial success—“Looking at life as a gold rush”—and instead consider how their actions improve the lives of others. He challenged them to ask, “What kind of human being am I going to be in the world—so that my voice will be lifted, so that it helps somebody else out and provides some joy.”

Asked to reflect on his life as a philosopher, Dr. West conceded the demands of a speaking schedule that sometimes kept him away from home for more than 200 days a year. He jokingly called himself  “lazy compared to” guitarist B.B. King, who, he said, performed more than 300 nights a year.

Turning again to a musical analogy, Dr. West repeated his description of himself as a “blues man in the life of the mind.” He noted that, like great performers, his vocation involves finding uplifting messages even within life’s tragedies.

“A blues man, a blues woman, is somebody who begins with catastrophe and tries to come up with ways to form style and smile,” he said,  “to form an intellectual armor—moral and spiritual armament—in order to be a freedom fighter, to be a love warrior, to be a wound healer and a joy spreader.”