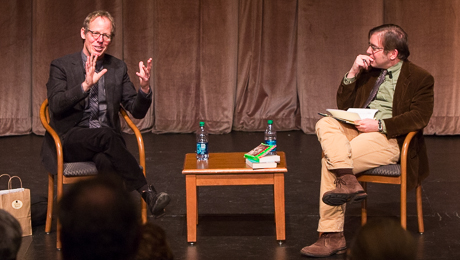 Drawing on his experience as a reporter, Civil War author and researcher, Mr. Horwitz spoke of a variety of elements that shaped (and continue to shape) Civil War ritual and remembrance. The discussion, sponsored by Altria and held at Dorothy Betts Theatre, was facilitated by GW Professor of History and International Affairs Andrew Zimmerman and is part of the university’s ongoing participation in the National Civil War Project, a multi-city, multi-year initiative among four universities and five performing arts organizations to commemorate the 150th anniversary of the American Civil War.

“This is a seminal moment in our nation’s history,” GW President Steven Knapp said in his opening remarks. “The Civil War continues to play a role in our consciousness and inhabit the hearts and imaginations of so many Americans, given its complexity. It still continues to haunt this nation in ways that have been illuminated in Mr. Horwitz’s writings.”

Dr. Zimmerman steered much of the conversation in the direction of writing about war, Mr. Horwitz’s two Civil War books and the role social justice played in America’s bloodiest conflict. Mr. Horwitz blended answers of human experience and military fact.

“If X and Y hadn’t happened at Atlanta and Petersburg, the war would have ended differently,” Mr. Horwitz said. “So military story matters. But there’s a difference between focusing on it and sanctifying it. Let’s be cognizant of the price that was paid.”

That price, Mr. Horwitz said, is bigger than we think, encompassing not only the lives lost during the war, but also the destruction of nearly half the country, and more than a century of poor race relations in the South.

“If you look at how it played out, with Jim Crow, and impoverishment and isolation of the South, it really took a century before the civil rights movement essentially fulfilled the promise of the Civil War and the South began to rejoin the nation,” Mr. Horwitz said. “I think it’s worth asking: was that the best we could do?”

In his answers, as in his books, Mr. Horwitz displayed his versatility, emphasizing that an understanding of the Civil War involves looking at it from many angles. The Civil War was the first U.S. conflict to be documented through photography, and Matthew Brady’s stunning images provide an uncensored look at the horrors of war. When Mr. Horwitz wrote “Confederates in the Attic,” he covered the story as a journalist, joining battlefield reenactors to understand those still gripped by the war and its aftermath.

“I think you can learn a lot through reenactment,” Mr. Horwitz said. “History, instead of being this distant object of study, is something you can experience viscerally — what it felt like to march 20 miles in the Virginia heat in a wool uniform with ill-fitting shoes and a musket over your shoulder.”

In “Midnight Rising,” Mr. Horwitz took a more traditional approach to describing the life, cause and chaos surrounding the abolitionist John Brown. The Pulitzer Prize winner poured himself into archival research, even going so far as to hang a portrait of Brown above his desk.

“He’s a rather severe-looking fellow,” Mr. Horwitz said. “He can kind of wear you out.”

“I came to think of him as an Ahab, as this obsessive man — a white male working for the destruction of slavery, who will take down everyone with him if necessary,” Mr. Horwitz said. “He forces us to think about these difficult issues: Do the ends ever justify the means? Does violence justify social justice? When, if ever, does an individual have the right to defy their government in pursuit of their own consciousness?

"If you do an honest examination of this man, he’s a terrorist and he’s a crusader and visionary. He’s a very complicated man ahead of his time."

Similar questions, Mr. Horwitz said, are raised over the cost of the war, which left 750,000 dead and an entire region of the country ruined for the better part of a century. As GW continues its multi-year participation in the National Civil War Project, Mr. Horwitz believes the topic endures because the main issues at stake — race, states’ rights, the United States as “one” union — remain relevant, despite race relations drastically improving over the last half century. Less than two years ago, controversy erupted in Selma, Ala., over the renovation of a monument honoring Ku Klux Klan Grand Wizard and Confederate Gen. Nathan Bedford Forrest. This shared history of American conflict, as the reenactors in “Confederates in the Attic” demonstrate, is somewhat unfinished, and much like “Midnight Rising” subject John Brown, remains a complex topic.