CIA Director: Possibility of a Cyber Attack ‘Worries Me at Night’ 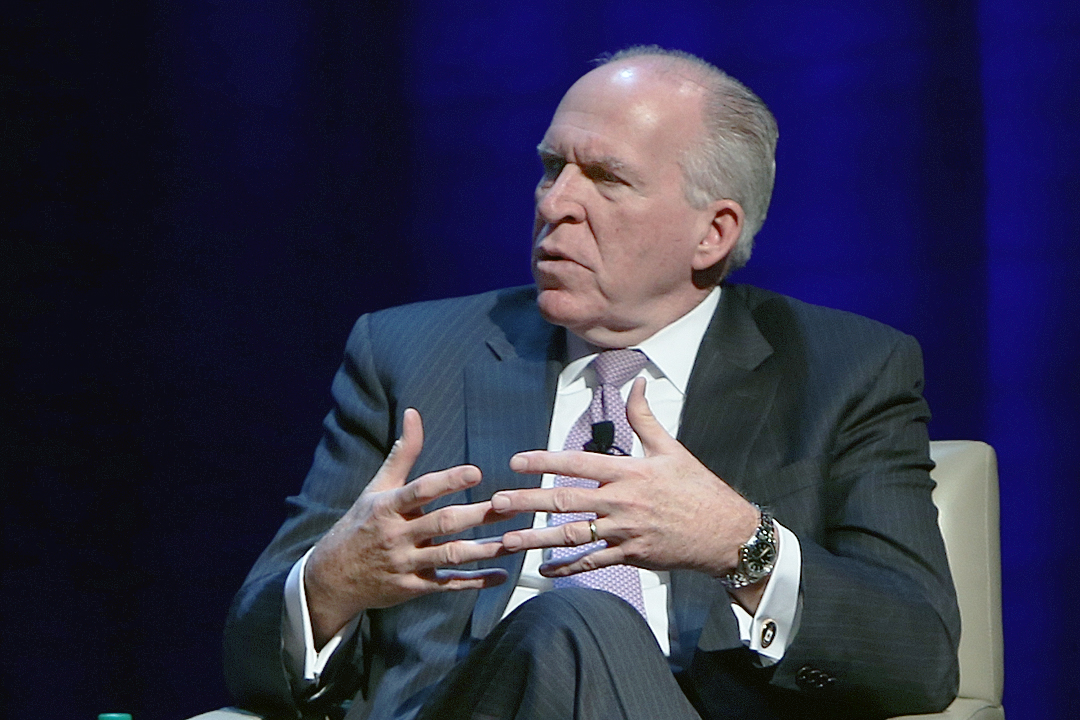 CIA Director John Brennan participates in a panel discussion at "The Ethos and Profession of Intelligence." (Rob Stewart/GW Today)

The proliferation of technology and the destabilization of established nation-states have made threats to the United States more difficult to identify and trace, Central Intelligence Agency Director John Brennan at the second annual “The Ethos and Profession of Intelligence” public conference on national security Tuesday.

“We have never confronted a wider array of challenges to our national security,” Mr. Brennan said in his opening remarks.

The conference, cohosted by the George Washington University Center for Cyber and Homeland Security and the CIA, brought experts from across the intelligence community to Lisner Auditorium to discuss the myriad issues affecting their field today.

“This agency and our intelligence community partners must have the trust and confidence of the citizens we serve in order to carry out our mission,” he said. “Earning that trust requires that we get out and explain our work, articulate our values and lay out our fundamental motives and objectives.”

Discussion ranged from upheaval in the Middle East to data-sharing practices across multiple agencies to the recent hack of Mr. Brennan’s AOL account by a culprit claiming to be a high school student.

“This is the best of times and the worst of times” to be an intelligence professional, Adm. Rogers said.

The ability to gather data from almost infinite sources has made it easier to generate insight. “It’s not by chance that we haven’t had a major 9/11 [attack] since 2001,” he said.

But “the complexity has never been tougher. The broader social context in which we work is increasingly tenuous. Mechanisms of government are largely distrusted. That’s not an easy environment to work in,” Adm. Rogers said.

When Ms. Ifill asked what kept the men on stage “up at night,” they tended to agree: the possibility of a major cyber attack.

“Because of the capabilities that exist [to perpetrate cyber crime]…sub-national actors, groups and individuals, can do tremendous harm because they want to and because they can,” Mr. Brennan said. 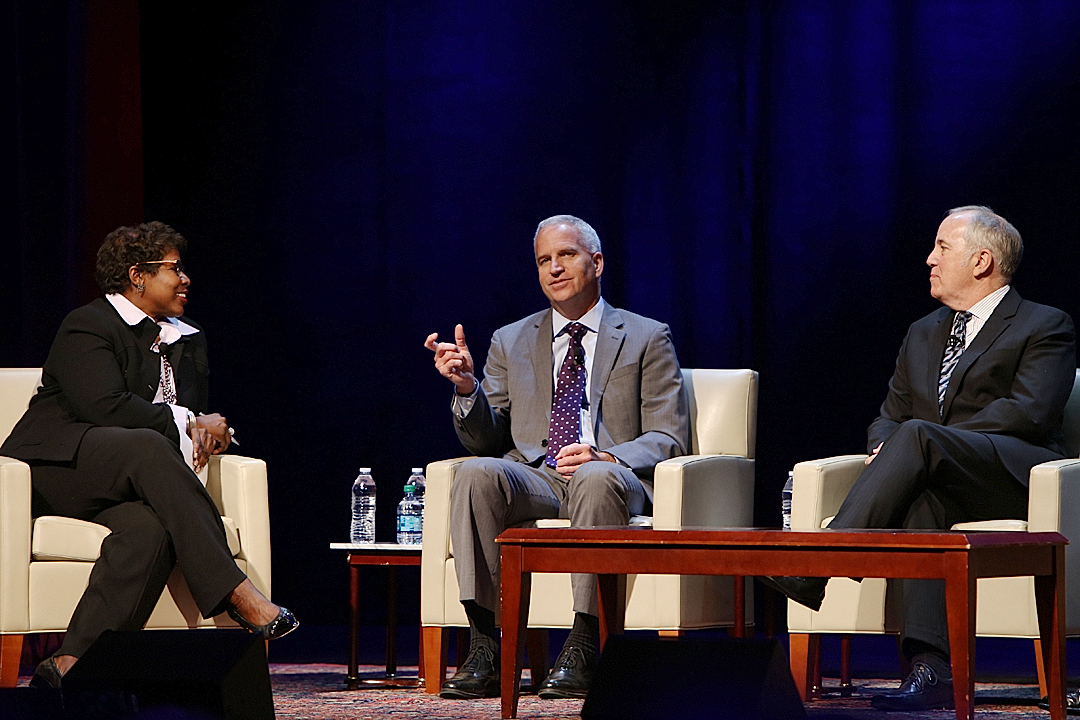 (Left to right) Gwen Ifill leads a conversation that included Robert Cardillo of the NGA and Doug Wise of the DIA. (Rob Stewart/GW Today)

Also concerning was the lack of an updated legal or policy framework around cybercrime in general.

“I see the role of government to try to promote the well-being…of its citizenry,” Mr. Brennan said. “If it doesn’t have a way to do that in the cyber environment, then the government is not fulfilling its primary responsibility to the people.”

They also agreed that traditional methods of obtaining intelligence were no longer always relevant. Mr. Cardillo said his agency has had to wean itself from the comforting immutability of borders on a map.

“That framework of nation-states, which is important in some parts of the world, is almost meaningless in other parts,” he said. “What I see playing out over a generation is realignment along ethnic, religious, societal and historical bounds. So my challenge is to provide a new frame of reference, whether it’s about human geography or ethnicity or whatever.”

Mr. Clapper laid out seven principles for intelligence work, which he said he had gathered from five decades in the business and growing up with a father who was a signals intelligence officer. The U.S. intelligence community, he said, should act in a way commensurate with an increasingly transparent environment.

“The kind of transparency we’re engaged in now felt almost genetically antithetical to me, at least for the first couple of years,” he admitted. “But it doesn’t really feel that way anymore.” 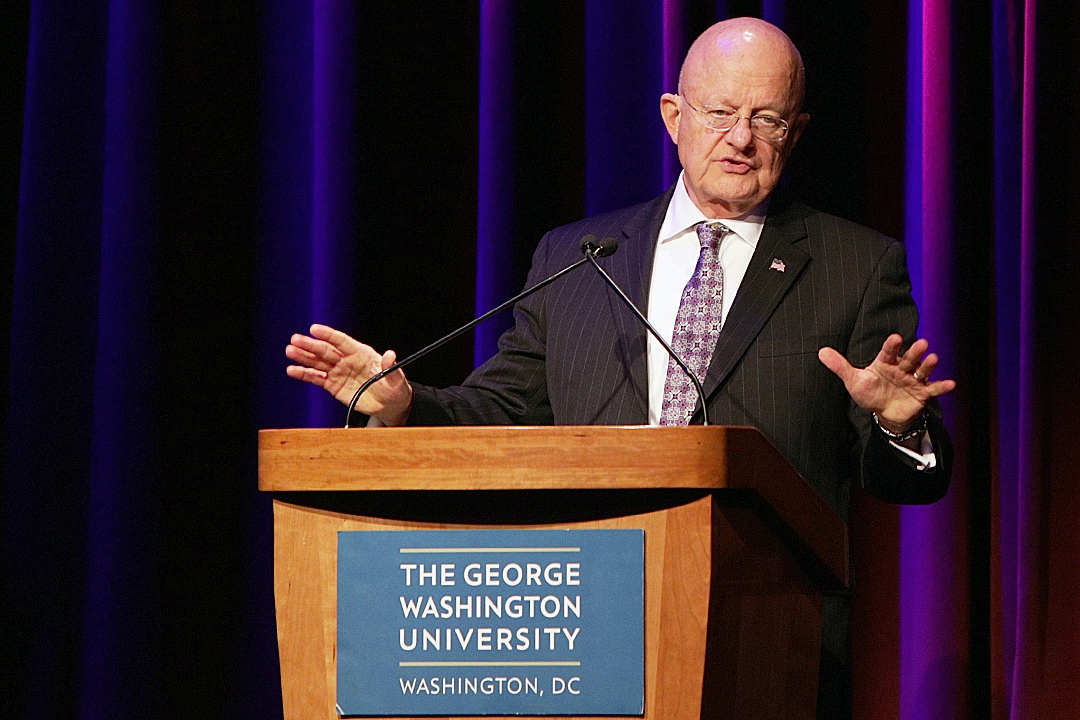 One theme resounded: the world is getting more complex. And, as Doug Wise of the DIA said in the opening panel, the very wealth of available data poses its own problems.