The Changing Face of Health Care 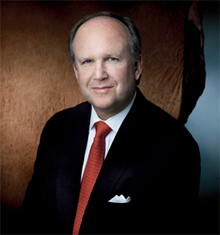 By Thom Kohout and Victoria Kreha

“The environment is ripe for innovation in how we consume, deliver and pay for medical care in the country,” Mr. Fetter said.

Mr. Fetter, the 21st Annual Gibbs Oration speaker, described the unsettled nature of the health care industry during his address at the Nov. 11 event, which was sponsored by GW’s School of Public Health and Health Services and the Department of Health Services Management and Leadership Alumni Association. The event also included two other annual lectures.

In the face of the changing industry, Mr. Fetter said students and those early in their careers will work for institutions that will be organized differently and will bear little resemblance to today’s institutions.

Mr. Fetter took the helm of Tenet Healthcare, a health care system based in Dallas that operates 50 hospitals in 11 states and 90 outpatient centers, in November 2002, following a series of potentially devastating strategic errors and medical ethics lapses by the company. In his remarks, Mr. Fetter focused on the steps Tenet took to navigate that period of uncertainty, suggesting they are an allegory for an industry weathering what is an increasingly ambiguous future.

Fundamental to Tenet’s resurgence was a renewed emphasis on quality. Mr. Fetter reengineered Tenet’s corporate culture and reestablished trust in the company by improving Tenet’s performance in federal quality measures, such as timely reporting, clinical requirements and patient-wait times.

Turning to the health care industry at large, Fetter described a landscape that is dominated by uncertainty, and he outlined three primary drivers of that ambiguity: passage of and opposition to the Affordable Care Act, proposed reductions to Medicare and Medicaid reimbursements as part of the deficit reduction negotiations and the need to restructure the health care delivery system.

In the 20 months since the Affordable Health Care Act was passed into law the nation has seen five appellate court rulings on its constitutionality and sustained effort by congressional Republicans to overturn the law. Earlier this week, the U.S. Supreme Court announced it would review the act’s health care mandate with a ruling expected to come out next summer.

Under the law, which begins in 2014, everyone would be required to obtain health insurance or pay a tax penalty. States would be required to cover all residents with incomes up to 133 percent of the poverty level under Medicaid. States can also create health benefit exchanges where individuals can purchase coverage with premiums and cost-sharing credits available to individuals and families between 133 and 400 percent of the poverty level.

“I think it’s great that our nation is finally addressing the uninsured crisis,” Mr. Fetter said.

In 2010, Tenet provided $120 million in indigent care, and the company incurred an additional $380 million in charges for non-indigent patients who were uninsured.

“That’s half a billion dollars in unreimbursed care at just our 50 hospitals. This is an incredibly inefficient way to finance the health care system,” he said.

The potential impact of budget deficit reduction negotiations on federal programs such as Medicare and Medicaid threatens to further weaken the nation’s health care system, Mr. Fetter said. Years of rate cuts have resulted in a system that fails to cover the cost of the services being provided.

“We must not ignore the consequences of taking a chainsaw to these government health programs at a time when they are the only health safety nets in many of our local communities,” he said. “I believe we are at the point where we will see weaker hospitals fail if additional rate cuts are imposed.”

Following Mr. Fetter’s remarks, Michael A. Sachs, chairman and CEO of Sg2, a health care consulting firm, gave a lecture on the future of health care. Chosen as the Ninth Annual Russ Coile Lecturer, Mr. Sachs described what the system should look like in the next few decades.

Market-based solutions that are patient focused rather than provider focused will help to ease the burden on the health care system, Mr. Sachs said. While many procedures are more expensive in hospitals than in ambulatory care facilities, the government puts regulations on where certain procedures covered by Medicare can be performed. The U.S. should move from a fee-for-service system to a system that has a range of payment options, Mr. Sachs said.

To be more patient focused, he said, providers should be measuring a good month in terms of how many patients can be discharged because they got the best care possible and are now ready to go home, not how many procedures were performed.

“We need to focus on providing the most efficient, least acute care possible,” he said.

The last lecturer in the HSML speaker series was Jason Meier, M.H.S.A. ’07, administrative director of the Department of Radiation Medicine for the North Shore-LIJ Health System.

Mr. Meier said he was able turn obstacles in his career path into opportunities because he was flexible, confident and “recognized the value in everything that happened.”

He offered several pieces of advice to the SPHHS students in the audience.

“Remember that what you do resonates more than you know. Always be consistent, and remember that as a manager everything you do will be talked about. Learn everything you can, and remember that communication is key. All the time you spend developing your fundamentals will pay off. Basic skills like learning Excel and how to read a budget may prove invaluable to you one day,” said Mr. Meier. “And finally, don’t be so focused on where you want to go that you don’t enjoy getting there.”