Career Milestones: Two Who Have Served the GW Community for Decades

Julie Perry, with 40 years, and George Jabbour, with 35 years, both most fondly remember their connections with students.
December 10, 2022 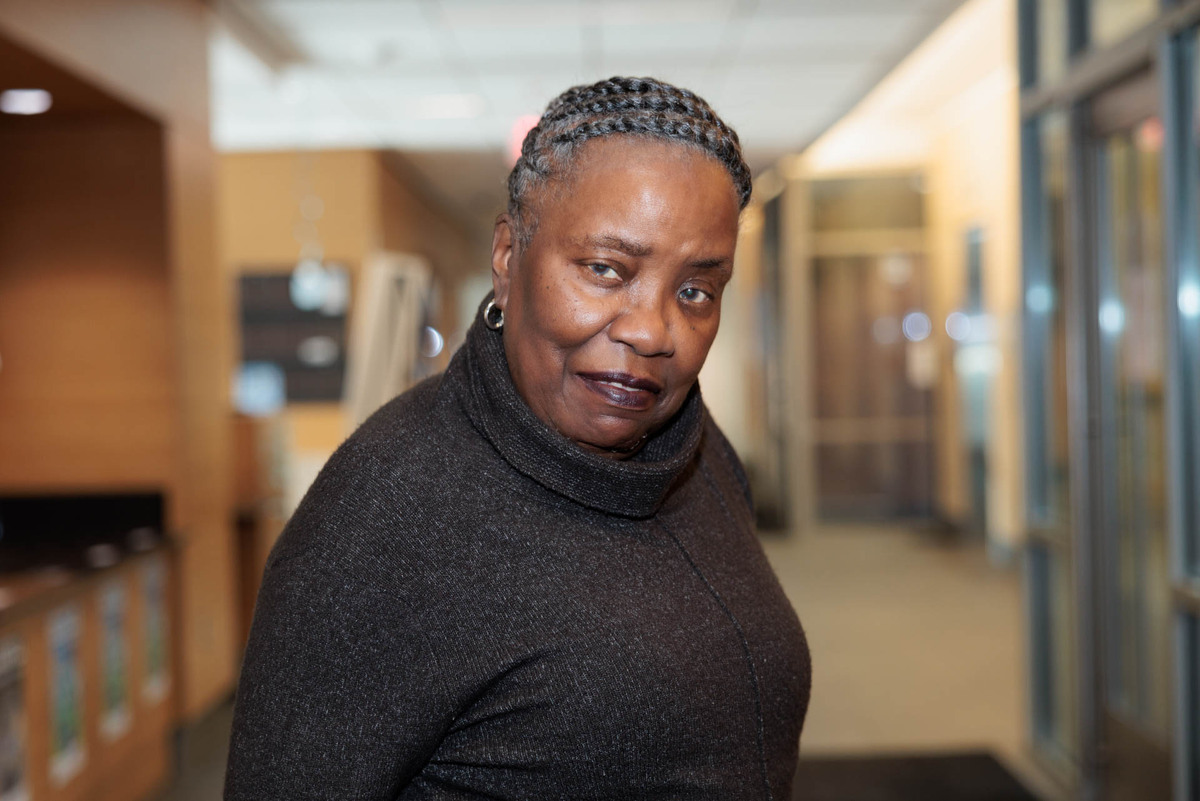 GW recognized Julie Perry for her 40 years of work at the university. (William Atkins/GW Today)

By Keith Harriston and Nick Erickson

It was late fall in 1981, with winter coming fast, and Julie Perry had just lost her job. And she worried because she had not only herself to take care of but also her then 7-year-old son, Kevin.

“I was trying to figure out what I was going to do for my son, and I didn't tell my family,” Perry remembered. “I'm kind of an independent person. I don't ask. I can need it, but I won't ask for it. And I put in for unemployment, and it was getting close to Christmas, and I just started praying. I said, ‘God, please help me. This unemployment is getting ready to run out.’”

As the holiday approached, her prayers were partially answered. A friend she had known since fifth grade but hadn’t seen since sixth grade, offered her cash for the holidays and refused her insistence that she repay him. She still struggled some over the next few months. Her unemployment support, which in those days came in a lump sum payment, was running low. But in early May, she got a call about a possible job.

“I got a call on a Tuesday,” Perry said. “I still remember the day. I was really low. I was just sitting on my porch, feeling it, wondering what was going to happen. I got that call, and the person asked me was I still looking for a job. I told them ‘yes.’ And I started working the next Monday, the day after Mother’s Day in 1982.”

The call was about a housekeeping job in Safety and Facilities at the George Washington University. “It was working a night shift,” Perry said. “I didn't care whether it was day, night, evening. I just wanted to work and take care of my son.”

And for the next 40 years—and counting—Perry hasn’t worried about work.

Over her time at GW, Perry has been assigned to Ross Hall, Thurston Hall, Dakota Hall, Guthridge Hall, South Hall and other campus buildings.

“Back in the day,” she recalled, “we were cleaning the common areas and also the students’ rooms. And some of the rooms made us want to cry. But I got the chance to know so many students. I'm the kind of person who talked to them. I saw a lot. Sometimes some of them would be crying or need help or just somebody to listen. I prayed with some. I met so many kids, all nationalities. I met some beautiful students over the years.”

Perry said many of the students she has encountered over years at GW remember her. Some who return to campus after graduating will see her and call out her name—Ms. Perry, sometimes Ms. Julie. They’ve given her gifts for the holidays or at the end of the semester: gift cards, holiday cards stuffed with cash from residents on particular residence hall floors, gift cards for spa treatments.

“Sometimes, after so many years, I don't remember them all,” Perry said. “But they remember me, and it makes my heart feel so good to know that I had touched some of these students. Looking back on it now, I just never thought when I got this job that I would be here this long.”

But that stick-to-it-ness is part of Perry’s DNA. Six years ago, she became a minister at New Bethel Baptist Church in Northwest D.C., the same church where she was baptized at 7 years old by former civil rights icon Walter E. Fauntroy, who was the church’s pastor.

Talk to Perry for any length, and it’s clear that faith is key in her life.

“You can talk to her about anything,” said Sylvia Graham, a co-worker of Perry who has worked at GW for 38 years. They’ve known each other for 36 years. “We’ve grown closer as time passes. My husband passed about a year ago, and Julie has helped me through it. She talks to me and prays with me.”

And what else should people know about Perry? “Her sense of humor,” Graham said. “She doesn’t always show that side of her to a lot of people. But she is funny. And she loves to laugh.”

Next year, 2023, will mark Perry’s 41st year working at GW. Is retirement coming any time soon?

“My family says I’m like my grandfather,” she said. “He was still working when he was 82.” She said her son and her five grandchildren—Bernard, Charlie, Tyzell, Tyla and Jaynia—often urge to think hard about retirement. “I told my family, let me decide. I tell them when y'all see me home every day, you will know that I retired.” 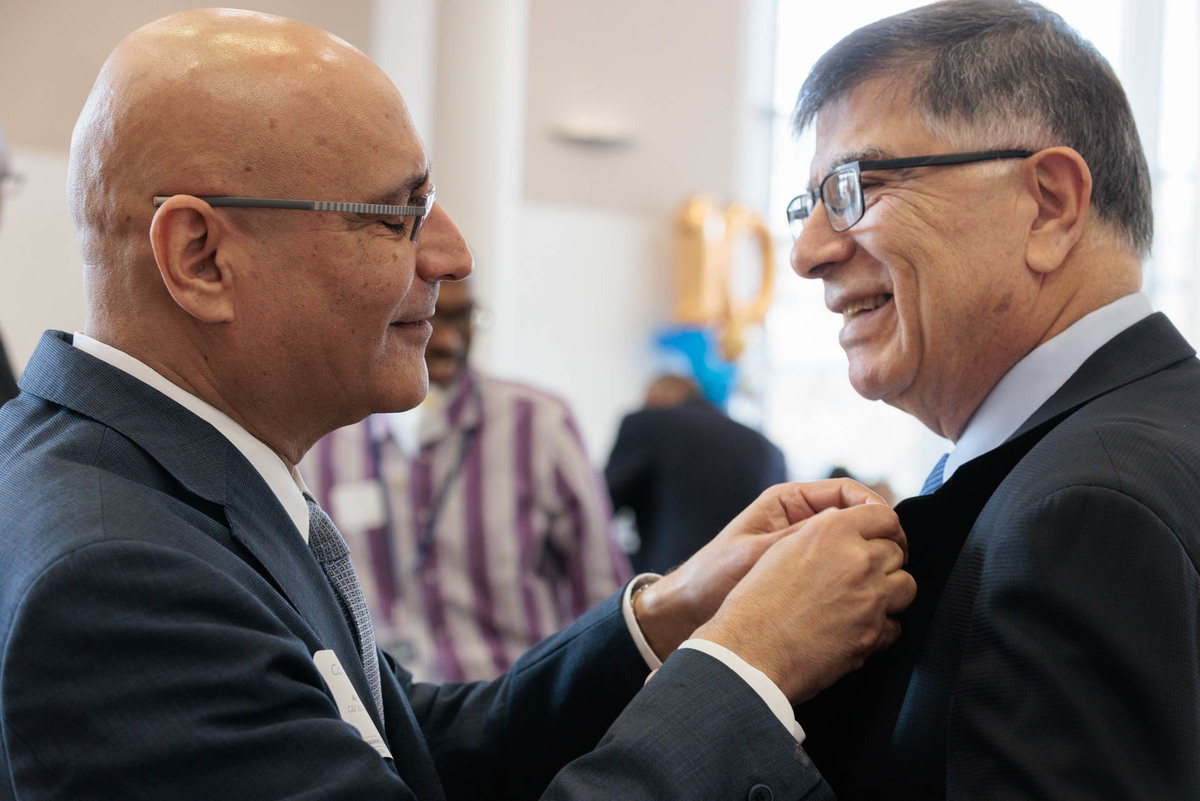 When he came to the United States in 1980, and later George Washington University on a full scholarship to pursue a master’s degree in finance 1982, George Jabbour, M.B.A. ’83, Ph.D. ’89, never thought he’d stay in the country let alone the same institution for the remainder of his career.

But war was raging in his home nation of Lebanon, forcing him to stay put in the United States for the time being.

He’s still here nearly four decades later, cementing a legacy and leaving his stamp at the GW School of Business (GWSB), where he has served as the vice dean for executive education since 2013. The university recognized Jabbour last week for his 35 years of employment service to GW, which started when he was an instructor as a Ph.D. student in 1987.

While he has a laundry list of accomplishments that includes 26 publications, visiting professorship opportunities across the world and consulting for the World Bank Group and International Monetary Fund, one of his most noteworthy professional achievements was helping to establish the Master of Science in Finance (MSF) degree at GW.

The program has grown from idea into one of the nation’s most respected, as it ranked No. 2 among U.S. institutions and No. 47 worldwide in the Financial Times 2021 rankings of Master’s in Finance pre-experience programs. Jabbour has served as the director of the MSF program since 1995 and feels a great deal of pride seeing what it has become today.

“You cannot find any major financial institution in the U.S. or the world that doesn’t have a graduate of our Master of Science in Finance program, and that makes us very proud,” Jabbour said.

The makeup of the incoming class of first-year MSF students for the 2022-23 academic year reflects Jabbour’s own journey at GW. According to the MSF program webpage, 10 countries were represented among 83% of international students that make up the class.

No matter where students of the program come from or where graduates end up, Jabbour always enjoys reconnecting and seeing where those former students of his are today. Being able to hear about the value of the MSF program through their perspectives gives him a great deal of joy that has kept him energized all these years.

“A lot of students send letters that say I’ve made a big difference in their lives, and that gives me the most satisfaction,” he said. “You see your students achieving things, and they send you a letter saying it’s because of your class or because of what you taught me.”

In addition to his work creating the MSF program, he has developed curriculum for the Bachelor of Business Administration program. Jabbour has also been an assistant professor, associate professor and professor at GW and has won many teaching excellence awards.

Outside of GW, he has been a consultant and conducted professional training for the World Bank Group in D.C., Austria and Pakistan; the International Training Banking Center in Hungary; the Center of Excellence in Management in Kuwait and Kipco Asset Management Group, both in Kuwait. Jabbour has also been a visiting professor at Franklin College in Lugano, Switzerland; Dongseo University in South Korea; Holy Spirit University-Kaslik in his home country of Lebanon; Renmin University of Beijing; and Sorbonne University in Paris.

He is also active in equity and derivatives trading and was a senior financial analyst at Federal Home Loan Mortgage Corporation and a consultant to several American corporations and international organizations.