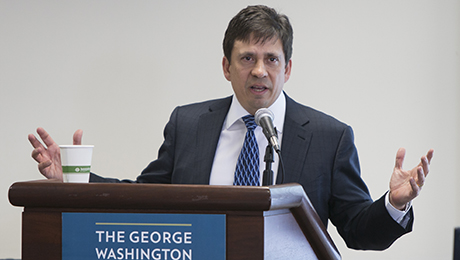 Board of Trustees Chair Nelson Carbonell, B.S. ’85, outlined five principles at Friday’s Faculty Senate that will shape future governance policies at the university, including the Faculty Code. His presentation was an opportunity to solicit feedback and comments from members of the Faculty Senate, and to continue a dialogue about how to achieve the university’s goals. Mr. Carbonell announced in September that the Board of Trustees would review the Faculty Code to ensure it was in keeping with the university’s strategic plan.

The Faculty Code is an agreement between the GW faculty and the administration that establishes governance policies at the university. It includes procedures on how to implement the code, as well as practices on academic freedom, professional responsibilities and more.

A group of faculty and board members worked collaboratively to engage in a broad, university-wide dialogue during which they met with more than 600 faculty members over a six-week period. They also attended 23 department meetings, seven meetings with the Faculty Governance Task Force and two meetings with the Faculty Senate Executive Committee to understand the full scope of faculty needs across schools and disciplines.

“The Board of Trustees recognizes the value of shared governance and a strong, constructive relationship with faculty and the administration. Shared governance is a wonderful institution here, and we need to not only preserve it, but strengthen it as we move forward,” he said.

Mr. Carbonell said he continually heard concern about which faculty members are able to participate in governance, including the process of getting feedback about the Faculty Code that he has led.

“We need to make a statement that says it's not okay to be a bully. It's not okay in this environment to create a world in which people don't feel free to think what they think and do what they do,” he explained.

The university will be wholly committed to promoting academic freedom, he continued, and will ensure it exists for everyone. He added GW will strengthen its provisions so that academic freedom extends to new mediums of teaching, like classes online and abroad. All faculty should make it an objective to promote an open, supportive environment where people can conduct the research they find important without worrying about repercussions from other faculty members, he said.

Moving forward, processes of gaining tenure at the university will be transparent and less cumbersome. While plans are still developing on what an exact system will look like, Mr. Carbonell suggested perhaps a future system will include a small, university-wide committee that would administer tenure. He shared that the Board of Trustees currently reviews tenure appointments, which in his view is an unnecessary “rubber stamp” process because board members often don’t have the background to evaluate candidates.

Similarly, the university will define a consistent role for faculty and administration in the selection and retention of deans and administrators. Mr. Carbonell praised the Milken Institute School of Public Health Dean Lynn R. Goldman for leading the charge to secure historic donations from the Milken Institute and the Sumner M. Redstone Charitable Foundation by demonstrating the university could engender transformative public health progress in the nation and in the world. The job of being a dean has changed, Mr. Carbonell said, and today it has become much more than an academic appointment.

“The best possible deans are stewards of their departments,” he said, explaining the most successful deans are also able to fundraise and appeal to philanthropists.

The process for finding deans doesn’t need to be altered significantly, Mr. Carbonell went on. Current dean searches will not be disturbed, but reviewed to ensure they provide the best outcomes. He also recommended that the university initiate a process for deans to receive consistent feedback and performance reviews from faculty to continually improve leadership.

“It is important for us to realize change is possible here,” he said. “Unless we find a way to take on risks, we won’t achieve the mission we’ve established.”