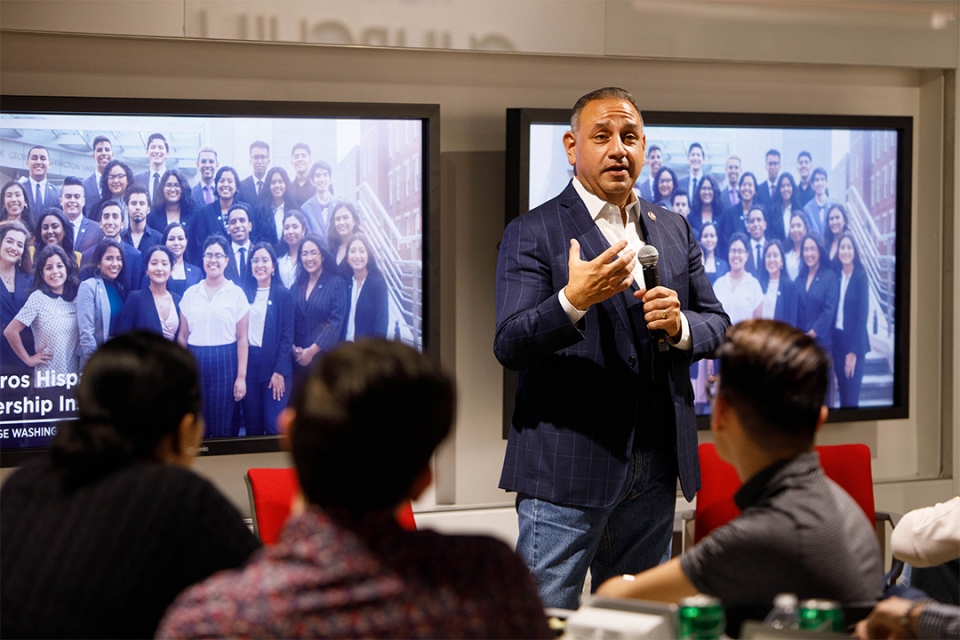 Former U.S. Rep. Gil Cisneros, B.A. ’94, here speaking at an event celebrating the GW Cisneros Scholars, was confirmed by the United States Senate as the new undersecretary of defense for personnel and readiness. (Photo: William Atkins)

Philanthropist and former U.S. Rep. Gil Cisneros, B.A. ’94, was confirmed by the United States Senate Wednesday as the new undersecretary of defense for personnel and readiness. He will serve as a senior adviser to the secretary of defense, managing recruitment, military readiness and the education and health benefit programs within the Department of Defense.

Mr. Cisneros, a U.S. Navy veteran, represented California’s 39th Congressional District from 2019 to 2021. In his new role, he will oversee National Guard and Reserve affairs and manage military and civilian personnel requirements, including equal opportunity, morale, welfare, recreation and quality of life matters.

“Nothing inspires me more than hearing why people with vastly different backgrounds choose to serve,” Mr. Cisneros said at his confirmation hearing before the Senate Armed Services Committee. “For all the things that divide us as a nation, there are still millions of service members and civilians who put the team, the mission and our country before anything else. They do it because they care. They want to be part of something larger, and they want to be surrounded by the best of our country.”

Since its founding in 2015, the institute has cultivated citizen scholars and innovative research focused on the Latino community. Its initiatives include the Cisneros Scholars and the Caminos al Futuro leadership and professional development programs for GW students and rising high school seniors who show a commitment to service in the Latino community. Its current research activities include a project funded by the National Science Foundation to explore the emotional wellbeing of Latino undocumented young adults, and a study funded by the National Institutes of Health and GW’s Cross-Disciplinary Research Fund to examine the effects of immigration policy changes on Latino families.

“At GW, Gil has made an enormous impact on the lives of our students and families through his commitment and generous support of the Cisneros Hispanic Leadership Institute,” said CCAS Dean Paul Wahlbeck. “Thanks to his vision, the institute has become a model for leadership development aimed at increasing the potential of our students—many of whom are first in their family to attend college—to make a difference in their community.”

While in Congress, Mr. Cisneros, who is a GW Monumental Alumni award recipient, served on the House Veterans’ Affairs and Armed Services committees, spearheading efforts to improve services for military families and sexual assault prevention. Among his priorities in his new position, Mr. Cisneros emphasized preparing defense personnel to confront emerging challenges like cyber threats and recruiting a diverse workforce that “looks like the country we serve, with different racial, religious, gender and sexual identities, as well as diverse political, ideological and geographic backgrounds.” Mr. Cisneros also stressed creating “workplaces free of discrimination, sexual assault and other mission detractors.”