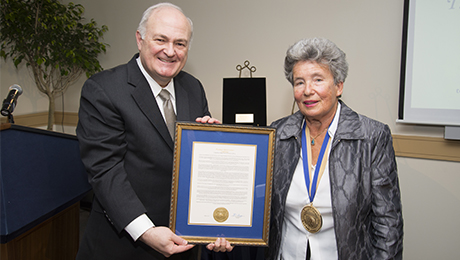 At the height of World War II, as the Nazis attempted to finish their heinous extermination of European Jews, a Swiss diplomat stationed in Budapest hatched an idea to protect the defenseless from persecution.

The diplomat, Carl Lutz, called on Swiss protecting power mandates—allowing a nation to protect the citizens and interests of another country on foreign soil—and issued protecting letters to Hungarian Jews, shielding them from the Nazis and the fascist Hungarian Arrow Cross. His actions saved the lives of 62,000 people during the Holocaust.

“George Washington is proud to honor Carl Lutz as a distinguished alumnus and a passionate advocate for social justice, whose tireless and courageous efforts rescued tens of thousands of those who would have perished during the Holocaust,” GW President Steven Knapp said.

Mr. Lutz led Switzerland’s foreign interests section in Budapest from 1942 to 1945, representing 14 countries that had severed ties with the German-allied Hungarian government. In this capacity he worked with the Jewish Agency for Palestine to issue safe-conduct documents for 10,000 Jewish children to find new homes in what would later become the State of Israel. During this time, and against the backdrop of a genocide that claimed the lives of an estimated 6 million people, he also staged one of the largest rescue operations of the 20th century.

Mr. Lutz fought the mass murder of Jewish families with pen, paper, diplomacy and action. He established 76 safe houses around Budapest, declaring them annexes of the Swiss Legation and off-limits to Hungarian Arrow Cross forces and Nazi soldiers. Among these locations was the legendary Glass House, where 3,000 Jews found refuge and the Zionist Youth Movement was headquartered. Mr. Lutz also negotiated with the Hungarian government and the Nazis to issue protecting letters to 8,000 Hungarian Jews, guaranteeing their safety. In an audacious feat of diplomatic skill, he deliberately misinterpreted his permission for 8,000 as applying to families rather than individuals. At great personal risk, Mr. Lutz secretly issued tens of thousands of additional letters to Hungarian Jews.

“It was a ruse,” Ms. Hirschi said of her father’s plan. “[Nazi leader Adolf] Eichmann spoke of units—Jews were not people, just units. So my father interpreted ‘units’ as ‘families.’ Thus he was able to increase the number of people he could protect.”

“He understood the Germans might well respect an important-looking document, as long as it was signed, stamped and notarized,” said Dr. Gati, whose family received protecting documents at Glass House.

By the end of the war more than 50,000 Hungarian Jews were living under Swiss protection. Mr. Lutz literally pulled some of them out of concentration camp marching lines and handed them protective documentation.

“Holocaust memory reminds us how vulnerable we are to such evil, but also includes the memory of those very few who risked their own lives to save fellow human beings,” said Walter Reich, Yitzhak Rabin Memorial Professor of International Affairs, Ethics and Human Behavior at the Elliott School of International Affairs. “And among those, we’re honoring at this ceremony one of the greatest, Carl Lutz.”

Mr. Lutz passed away in 1975. The GW alumnus, who according to his daughter “was penniless and spoke no English” when he first arrived in the United States, has since been honored many times for his bravery. In 1991, the city of Budapest established the Carl Lutz Monument, located at the entrance to the city’s former Jewish quarter. In 1999, the Swiss Confederation issued a national postage stamp in his memory.

“I think of him as the bravest of the brave,” Dr. Gati said. “He was fearless. May his deeds never be forgotten. May others follow in his footsteps.”