Alumni, Supporters of the University Recognized for Their Contributions to GW

The Spirit of GW Awards honors alumni and a foundation for professional, philanthropic and volunteer achievement.
October 3, 2022 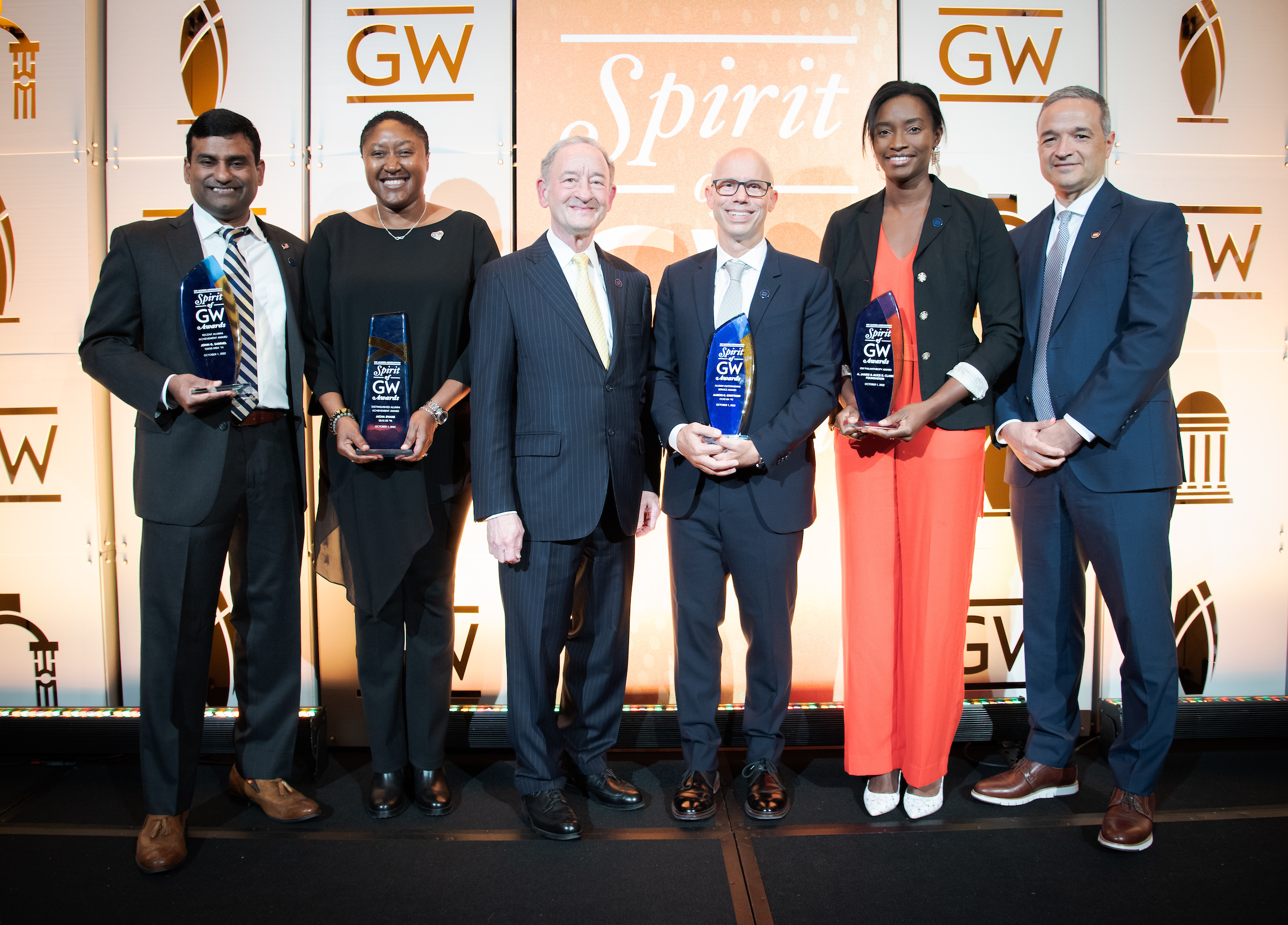 George Washington University honored three alumni and supporters of the university Saturday evening at the Spirit of GW Awards for their accomplishments and contributions that have elevated the standards of excellence and generosity to the GW community.

The ceremony was part of Alumni & Families Weekend, which drew large crowds to the Foggy Bottom and Mount Vernon campuses and nearby venues, including the Four Seasons Hotel where the Spirit of GW Awards was held.

“The individuals we recognize this evening are remarkable alumni and supporters who have redefined their chosen professions and have given of their time, talent and treasure to make George Washington University into the institution that it is today,” said GW President Mark S. Wrighton. “They lift the university. Their story is a story of transformation.”

GW alumni number about 320,000. They live in all 50 states in the United States and in 150 countries. Patricia Carocci, associate vice president for alumni relations and annual giving, told awardees they “have proven the possibility of a greater world starts here at GW. You’ve shown us what GW can offer, and you’ve demonstrated the responsibility that comes from access to an institution like ours.”

“Every year, thousands of GW alumni volunteer to serve the GW community in a variety of ways and play an important role ensuring the GW legacy is sustained for years to come, benefiting current and future generations of students,” Alexander said.

Read about the honorees:

Aicha Evans, B.S. ’96 received the award for achieving a high level of success in her career and attaining distinguished accomplishments in her personal and professional life.

In speaking of Evans, Wrighton called her “a true star” and noted that she has been recognized by Forbes’ 50 over 50 and Fortune’s 9 Powerful Women to Watch lists. The president sketched Evans’ path from birth in Senegal, a childhood in Paris to immigration to the United States where she enrolled at GW. Since then, Evans has held multiple managing positions at companies such as Rockwell Semiconductor and Intel, where she led more than 7,000 engineers.

“Aicha worked her way up the corporate ladder in a predominantly male industry to become one of the most powerful women in technology,” Wrighton said.

He acknowledged her contributions to the university as a SEAS commencement speaker, a generous donor to engineering scholarships and as a member of the SEAS Engineering Hall of Fame.

Evans is currently the CEO of Zoox, a subsidiary of Amazon that develops autonomous vehicles. “It’s surreal,” Evans said after receiving the award. “You’re sitting there, and it sounds like they’re talking about somebody else.”

She noted that SEAS professor Can Korman helped give her a sense of place when she arrived at GW and strategized with her about how to understand the engineering world. “I’m grateful for the support back then,” she said, “the sense of community, sense of understanding I got that engineering is about more than just solving problems. All I can say is thank you to all of you, I hope to pay it forward.”

John G. Samuel, M.B.A. ’14, was recognized with the award for graduates of the past 10 years who have attained notable achievements in their professional field.

College of Professional Studies Dean Liesl Riddle met Samuel when he first came to the GW School of Business M.B.A. program and realized he had difficulty with his vision. It helped her understand “what it’s like being a student with disabilities in our program.” She said he deserved the award because he “combined his own personal experience and knowledge gained from that experience to build a company that employs people with visual disabilities.”

Samuel is the co-founder and CEO of Ablr, a company that helps organizations be more inclusive by removing barriers that hinder people with disabilities.

“Once I opened up to GW classmates about my disability,” he said, “I had a sense of confidence that allowed me to open up my heart for the very first time. I found love on campus and met my wife, Nicole, M.B.A. ’14. This love, confidence and sense of belonging has kept me going through the ups and downs of my career since I left.”

Aaron R. Kwittken, B.A. ’92, was recognized for rendering an outstanding level of service that supports GW programs and positively impacts current and future members of the GW community.

“He has always put social impact at the center of everything he does professionally and personally,” Warren said, adding that Kwittken has made numerous contributions to the School of Media and Public Affairs (SMPA), a highlight being his support of stipends to offset unpaid or underpaid internships for students.

Kwittken is the founder and CEO of PRophet, an artificial intelligence driven data-as-a-service platform and an acclaimed leader in the public relations industry. He has served on SMPA’s Advisory Board for the past seven years.

“I have great affection for this university,” Kwittken said. “In addition to having a fulsome academic experience, the thing I found so special about GW at 17 and again today at 52, it surfaced humanitarian, philanthropic and leadership skills in me that I had no idea existed.”

He thanked Warren for serving as “a catalyst to his career.”

The A. James & Alice B. Clark Foundation was honored for extraordinary and enduring support that has had significant and inspiring impact on GW. The award recognizes extraordinary support of $1 million or more.

In presenting the award, GW Vice President for Development and Alumni Relations Donna Arbide noted that GW is among 11 university partners in the United States with a Clark Scholars Program. At GW, this scholarship program has supported more than 100 students.

“The Clark Foundation has opened doors for talented students pursuing a signature academic program that combines engineering, business, leadership development and community service,” Arbide said. “The Clark Scholars have made their mark on our campus. Leadership organizations like the Society of Women Leaders, Looking Glass, which is GW’s first virtual reality club, and the GW Engineering Ambassadors program. GW Clark Scholars have also made their mark on the world. They have successful careers at NASA, Lockheed Martin, YouTube, Amazon just to name a few companies.”

Joe Del Guercio, president and CEO of the Clark Foundation, accepted the award. He spoke of Trustee Emeritus the late A. James Clark's "long and personal connection to GW, noting that Clark Construction had built many of the academic and residence halls on campus, including Science and Engineering Hall. Del Guercio said that Clark and the foundation have invested in the School of Engineering and Applied Science, GW Law, and the Schools of Business and Medicine and Health Sciences. Clark received an honorary Doctor of Engineering degree from the university in 2010.

“Above all else, [Clark] was regarded as a man of his word,” he said. “He conducted multimillion dollar deals with a handshake. The importance he placed on integrity was matched only by his belief in the power of education to change lives…and support of future generations of engineering leaders who would be both ethical and civic minded.”