$2.5 Million Gift to Fund the Inaugural Director of Autism and Neurodevelopmental Disorders Initiative

With a gift from the Nelson A. and Michele Carbonell Family Foundation, the university will recruit a leader with a cross-disciplinary perspective in the field.
April 23, 2014 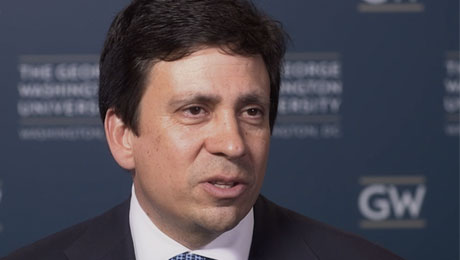 When 2-year-old Dylan was diagnosed with autism spectrum disorder (ASD) in 1996, his parents—George Washington University Board of Trustees Chair Nelson Carbonell, Jr., B.S. ’85, and Michele Carbonell—began a hopeful, but often frustrating journey, as they grappled with the question of how they would provide their son with a healthy and meaningful life.

It is an era that they refer to as “the Dark Ages.”

Eighteen years later, the world for parents of young children with autism is very different than the one Dylan’s parents faced, said Mr. Carbonell, with more early childhood intervention programs, stronger policies and a greater understanding of the disorder. But for young adults with autism, like Dylan, the world remains a difficult place to navigate.

“We’re still in the Dark Ages. Nobody has figured out how to create a world in which these young adults can live independently, have jobs and have a real life,” Mr. Carbonell said. “Now that our son is 20, we’re facing similar challenges that we faced when Dylan was 2 years old. There aren’t good programs, policies or strategies for adults and teens with autism transitioning to adulthood.”

The Nelson A. and Michele Carbonell Family Foundation announced Monday that it will be making a gift of $2.5 million to the university, which will provide an endowment for a professor who will serve as the inaugural director of the Autism and Neurodevelopmental Disorders (AND) Initiative at GW.

The primary mission of the interdisciplinary AND Initiative will be to find solutions for transitioning people with ASD and neurodevelopmental disorders into adulthood—ensuring that millions of young adults like Dylan will be able to lead productive and independent lives.

The AND Initiative currently has 86 affiliated faculty members from five schools within GW: the Columbian College of Arts and Sciences, the Graduate School of Education and Human Development, the School of Law, the Milken Institute School of Public Health and the School of Medicine and Health Sciences. Researchers in these schools are applying a multidisciplinary approach in the areas of research, policy and treatment for individuals with autism and neurodevelopmental disorders.

The forthcoming director of the AND Initiative will tie these moving parts together, making GW an integrated and centralized “one-stop” resource for people with autism and their families to obtain state-of-the-art assessments, interventions, medical treatments, support services and opportunities to participate in research and clinical trials. Additionally, the initiative will help shape policy and programs that will streamline and make affordable the necessary services for people with these disorders.

“GW has done many things in this area, and we think that our gift will allow us to bring those efforts into focus to make it real and make it permanent,” said Mr. Carbonell.

With its new director, the AND Initiative will be the only university-based institute of its kind that will focus specifically on transitioning adolescents and young adults, said Vice President for Research Leo Chalupa.

He said the hiring of the institute’s leader will be an “integral part” of getting the AND Initiative off of the ground, and the search team will look to hire an internationally recognized leader who has a cross-disciplinary perspective in the field.

“I think it’s a wonderful thing that the chair of the board could be the spark plug to make this happen,” Dr. Chalupa said. “It’s particularly gratifying to have that kind of stamp of approval and to  know that he believes GW is the right place to launch this very important initiative.”

The Carbonells said they hope the new director will be a catalyst to bring in more resources and recruit new talent to the AND Initiative.

Their son Dylan, who is studying art and animation at Northern Virginia Community College, still faces challenges with basic everyday tasks, the Carbonells said. And with 1 in 68 U.S. children who currently have been diagnosed an autism spectrum disorder, an even larger proportion of the U.S. adult population will be living with this disorder in the next decade.

It is the Carbonells’ wish that the AND Initiative will provide support services, solutions and, finally, hope for those living with autism and neurodevelopmental disorders in the D.C. metropolitan area and beyond.

“These young adults—they are the first wave of the autism epidemic. We need to do better by them,” said Mrs. Carbonell, who is chair of the National Capital Area chapter of Autism Speaks.  “And we don’t have time to waste.”

If you’d like to join the Carbonells in supporting the AND Initiative, please contact Heather Russell at [email protected] or make a gift online today.