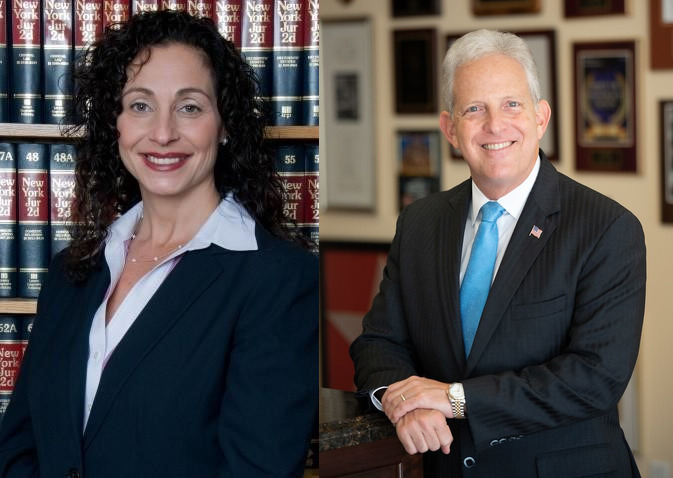 Alumni Sherry Levin Wallach and Gary Lesser are serving as presidents of two of the largest state bar associations in the United States.

Levin Wallach, who’s spent most of her career as a criminal defense attorney for people who can’t afford one, said she’s long known that she wanted to be part of the criminal justice system, but her time at GW—with its proximity to the land’s highest court and the city’s proclivity for activism—solidified her decision.

“GW being where it is, that's such an important thing,” she said, noting that major Supreme Court decisions occurred during her senior year. “I was able to learn so much and was involved in so many amazing programs, but I also had many opportunities as a result of being there.”

She said her priorities as bar association president include focusing on the impact of mental health and trauma on the legal system, the need for equal rights for citizens of U.S. territories and the modernization of criminal law practice.

“As a teenager growing up in a multicultural and economically diverse community, I saw the inequities that existed in the system and the judgment placed on individuals based on backgrounds or socioeconomic status,” she said. “So I very quickly decided that was something that was of importance to me—I wanted to help people. I wanted to make sure that people had all the opportunities that they could have in their lives.”

Levin Wallach, who serves as deputy executive director of the Legal Aid Society of Westchester County, stressed that she also wants to expand the association’s diversity and serve as a mentor to younger lawyers.

“Every moment I have free, I’m happy to engage with young lawyers,” she said. “That’s how I got involved. Somebody tapped me on the shoulder and said, ‘Hey, you should try this. You’re going to really like it.’ And then another, then another. So, I truly believe in mentoring and the importance of it.”

Similarly, Lesser attributes his success to the mentors in his life—especially his grandfather, who was an “old school country lawyer who helped anyone who walked through his door regardless of what they could afford to pay”—which is why as bar president he decided to create a mentorship program for recent law school graduates.

“Anywhere between 50 to 60 percent of people graduate law schools in Florida and do not have a job, and that’s because they’re on their own and no one's really helping them,” Lesser explained. “So we actually have a special committee building out a mentorship program that will be finished by the end of this calendar year and then launch next year.”

Lesser, who’s known since he was 9 years old that he wanted to be a lawyer like his father and grandfather before him, said he never set out to become bar president, but his time at GW instilled in him a desire to get involved that he carries with him to this day.

“It's not a coincidence that GW produces leaders. I never really saw myself as a leader; I just wanted to get things done and work with other people to get things done,” he said. “But GW lends itself to people getting involved, and I think it’s very unique in that way.

“And I think that it's important to take on leadership positions because we can stretch ourselves,” he added. “We can grow and be able to do things in ways that maybe two or three years ago we didn't think we could do.”

During his time at GW, Lesser—who is managing partner of Lesser, Lesser, Landy & Smith, the firm his grandfather founded, in West Palm Beach—was involved with the student-run radio station, student government and the GW Hatchet. He also took advantage of the university’s resources and fostered relationships with faculty members, which is his biggest piece of advice for current GW students.

“Approach people. Ask for help. Don’t be shy,” he said. “Get involved and put yourself out there. And if someone rejects you, it doesn’t matter because you’re trying to grow.”